Only eight weeks remain before Americans choose a new president, bringing to a close one of the most confounding political campaigns in U.S. history.

For Hillary Clinton and Donald Trump, the long months on the campaign trail were a mere prelude to this last, critical stretch. The final prize is in sight, but time is running out to convert voters into supporters.

What will it take for each candidate to win? We posed the question to a series of Democratic and Republican strategists and pollsters. Their answers reveal an arduous path for Mr. Trump and a smoother road for Ms. Clinton – but her trajectory is not without obstacles.

For Ms. Clinton, these experts said, the keys to victory include finding new ways to connect with voters, getting traditional Democratic constituencies to the polls in high numbers on Nov. 8 and denying Mr. Trump victory in the crucial state of Pennsylvania.

Mr. Trump, meanwhile, must show some ability to appear, well, presidential. That in turn would help to make his candidacy more palatable to white voters with a college degree and to women in general. If he cannot do so – and quickly – then a state like Pennsylvania will remain out of his grasp, as will the presidency.

"These are two flawed candidates, the least popular nominees in either party's history," said David Kochel, a Republican strategist who worked for Jeb Bush and Mitt Romney on their presidential campaigns.

But Ms. Clinton "has a huge advantage," he said, both because the electoral map favours Democrats and because she has spent months building an infrastructure to boost voter turnout.

While surveys have shown the race tightening in recent weeks, Ms. Clinton has maintained a consistent lead in national polls. No candidate leading at this point in the campaign has lost the election in the past 25 years, according to an analysis from The Wall Street Journal.

However, Mr. Trump has an opportunity to shake up the trajectory of the race in the three televised debates between the candidates, the first of which takes place on Sept. 26.

"At this stage, he needs to do well consistently in all three [debates] to be at all plausible," said Geoff Garin, a Democratic strategist and pollster who worked on Ms. Clinton's 2008 campaign. "Hillary Clinton doesn't need to be throwing Hail Marys and Donald Trump does."

The first order of business for Mr. Trump, the strategists say, is to act presidential – less erratic and more reassuring as a potential commander-in-chief, the face of a dangerous and unpredictable world.

Mr. Trump would be in a much better position against Ms. Clinton "if people didn't think he was on the verge of nuking people who tweet mean things about him," said Kristen Soltis Anderson, a Republican pollster and co-host of a podcast called The Pollsters. "So many people are supporting him reluctantly and waiting for him to prove that he can be a president," the Democratic strategist said.

Under the influence of his new campaign leadership, Mr. Trump has "modulated his style, but it's not consistent," said Celinda Lake, president of Lake Research Partners and a prominent Democratic pollster. "He would have to show a more presidential Donald Trump and do it consistently."

There are few signs of that happening. In a national security forum earlier this week, Mr. Trump praised Russian President Vladimir Putin as a stronger leader than President Barack Obama, a comment that left Republican lawmakers aghast.

If Mr. Trump had adopted a more presidential tone and demeanour around the time of the Republican National Convention and stuck to it, "people would have given him a second look," Mr. Garin said. "What we've learned about Donald Trump is that he can have a good night or a good day, but on the very next day, he can't help himself from being himself."

Mr. Trump's current predicament is that polls show him doing far more poorly than previous Republican candidates with constituencies that the party has dominated for decades. At a basic level, successful presidential candidates "have to consolidate support within their own party," Mr. Kochel said. "If you're not in the 90 [per cent range], there's something seriously wrong."

Mr. Romney and John McCain, the Republican candidates who lost to President Barack Obama, garnered 93 per cent and 90 per cent of their party's voters, respectively. By contrast, current polls have Mr. Trump winning around 84 per cent of Republican voters.

One of the reasons why Mr. Trump has failed to unite Republicans is because he has alienated large numbers of white, college-educated voters – a group that has tilted strongly toward the party in the past. Such voters are turned off by his recklessness in matters of foreign policy and his inflammatory, racially charged rhetoric.

Compared with Ms. Clinton, Mr. Trump has fewer paths to reach the 270-vote threshold for victory in the Electoral College. Nearly all paths run through the battleground state of Pennsylvania. For instance, in one plausible scenario, Mr. Trump could win Florida, Ohio and North Carolina – three major swing states – and still come up short if he is unable to secure Pennsylvania and Virginia.

The problem for Mr. Trump is that recent polling has showed Pennsylvania to be "light blue" – in other words, a likely win for Ms. Clinton. FiveThirtyEight, a website that tracks election polls, puts her predicted margin of victory in the state at 4.5 percentage points. In particular, Mr. Trump is struggling in the upscale, white suburbs that surround Philadelphia. "He has to start doing better in places like Bucks County and Montgomery County," Ms. Anderson said.

Ms. Clinton's challenge in the final stretch of the campaign is to connect with voters and give them affirmative reasons to cast their ballot for her – instead of supporting her simply out of distaste for Mr. Trump.

Ms. Clinton "still suffers somewhat from the perennial problem that people think they know her well, but they don't know her that well," Ms. Lake said. Emphasizing her family's story and her long involvement with issues such as the welfare of children can be very powerful, she said. Voters "respond to what she did before the cameras were on," the Democratic pollster said.

In the remaining weeks of the campaign, Ms. Clinton has the opportunity to "show the side of her that everyone who knows her says is there, but that she keeps so guarded in public settings," Mr. Kochel said. The Republican strategist advised not hiding from the media and avoiding overpreparation for the debates, so that Ms. Clinton doesn't come across as inauthentic or robotic.

The debates are also an opportunity for Ms. Clinton to hammer home the message of her campaign. Ms. Anderson said there's still some ambiguity on that front. "Originally I think it was 'Fighting for us' and now it's 'Stronger together,' " the Republican pollster said. Ms. Clinton "needs a message where people can say, 'I see how that affects my life,' " she said.

Ms. Clinton appears to be putting some of these tactics into action. On Thursday, she participated in her first formal press conference in about nine months, signalling a new openness to the media. And in a speech to the National Baptist Convention on the same day, she spoke about her upbringing and religious faith – the first of several addresses planned to connect her values to her campaign.

One of the keys to Mr. Obama's victory in 2012 was a campaign apparatus that revved up turnout among constituencies that favour Democrats but are less likely to vote, such as voters under the age of 30 and African Americans. Ms. Clinton must do her best to match that performance.

According to the latest results from the George Washington University Battleground Poll, 72 per cent of white voters, but only 52 per cent of African Americans, are very likely to show up at the polls. Similarly, 73 per cent of married voters are likely to cast their ballots, compared with just 57 per cent of single voters.

The evidence that Mr. Trump would galvanize Democratic voters to turn up on election day – out of disgust – is "mixed at best, honestly," Ms. Lake said. Meanwhile, "there's all this talk about demoralized Republicans, but they're not that demoralized," she said.

Ms. Clinton's campaign manager, Robby Mook, has long experience in building the on-the-ground networks that boost voter turnout. "That's a huge part of his background," Mr. Garin said. "This is months and months of work that builds upon itself. One of the strengths of the Clinton campaign is that it's been playing the long game."

3. Watch out for wild cards

The three debates are both opportunity and risk for Ms. Clinton, experts said.

"If she looks like a president and he looks like a child, he won't be growing his vote at all," Ms. Anderson said. On the other hand, as his many primary opponents learned, Mr. Trump is difficult to wound on live television, his natural medium.

Aside from the debates, other wild cards are difficult to predict.

Mr. Kochel said Mr. Trump might try naming his cabinet in advance to reassure voters about the talent and expertise that would make up his government. If a terrorist attack occurred in the United States, it would have the potential to scramble the contest in unexpected ways. So, too, would any new revelations about the past activities of the two candidates, whether in government or in business.

"My guess is there is nothing so consequential that it would rewrite the trajectory of the race," Mr. Kochel said. "The caveat, of course, is that 2016 has broken all the rules."

Aleppo is in Syria, Trump is incoherent, and other things we learned this week
September 9, 2016 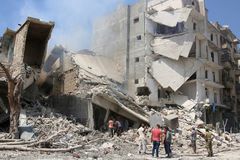 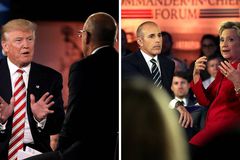 Opinion
Forget what you know about Red and Blue states
September 7, 2016 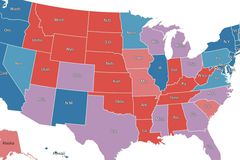 Analysis
On immigration, Trump tried to gut his own policy but keep the tough talk. Will it work?​
September 1, 2016 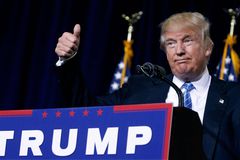