The drowning of as many as 700 migrants in the Mediterranean has put the European Union under enormous pressure to confront the human-trafficking crisis only months after a sweeping seaborne rescue campaign was scaled back because of lack of EU financial and moral support.

The woefully overloaded vessel, a fishing boat only 20 metres in length, capsized in the darkness early Sunday, when the migrants reportedly shifted en masse to one side to get the attention of a Portuguese merchant ship that approached to give assistance.

As the Italian and Maltese coast guards and navies searched for survivors and bodies – only about 30 survivors had been rescued by Sunday evening – Italian Prime Minister Matteo Renzi called for an emergency EU meeting to discuss the crisis of refugees trying to get to Europe by sea. He described the human trafficking as "the new slave trade" of the 21st century but ruled out a naval blockade of Libya, the source of most of the migrants desperate to reach Italy and other parts of southern Europe.

The European Commission, the EU's executive arm, called for "bold" and "immediate" actions to stem the crisis. But with Libya mired in chaos and violence after the killing of Libyan strongman and Italian ally Moammar Gadhafi in late 2011, cracking down on the human traffickers who load rickety boats with vulnerable migrants will not be easy.

"If you don't have enough [naval] assets, you can't keep up with the traffickers," Maltese EU parliamentarian Roberta Metsola said in an interview.

Late last year, the Italian government, with the encouragement of some EU member states, wound down its extensive Mare Nostrum migrant rescue operations in the Mediterranean, which were carried out by the Italian navy and rescued about 100,000 people in 2014.

The Italians also complained that the operation was excessively costly, at the equivalent of about $12-million a month, and that they had sought unsuccessfully to share the financial burden. Mare Nostrum's replacement program, run by the EU's border agency Frontex, is called Triton and operates with a mere third of Mare Nostrum's budget.

Sunday's disaster happened about 100 kilometres off the Libyan coast and about 200 kilometres south of the Italian island of Lampedusa, which lies roughly half way between Sicily and northwest Libya.

The emergency was declared at about midnight, local time, after which 20 Italian and Maltese ships took part in the rescue, along with three helicopters.

Italian prosecutors said a Bangladeshi survivor flown to Sicily for treatment told them about 300 people had been locked in the hold by smugglers when the fishing boat overturned. He also told investigators that 200 women and dozens of children were on board.

Prosecutor Giovanni Salvi stressed that there was no confirmation yet of the survivor's account and that the investigation was ongoing.

The Italian coast guard on Sunday said that only 24 bodies had been recovered. These small numbers are explainable if hundreds of people were locked in the hold, because with so much weight down below, "surely the boat would have sunk," said General Antonino Iraso, of the Italian Border Police, which has deployed boats in the operation.

Gen. Iraso said the sea in the area is too deep for divers, suggesting that the final toll may never be known. The sea off Libya runs as deep as five kilometres or more.

Sunday's tragedy appears to be similar to one last week, when about 400 migrants were believed to have drowned when a sudden rush to one side of the boat caused it tip over.

"A tragedy is unfolding in the Mediterranean and if the EU and the world continue to close their eyes, it will be judged in the harshest terms, Maltese Prime Minister Joseph Muscat said Sunday.

Speaking at a political event in northern Italy, Prime Minister Renzi said Europe was witnessing "systematic slaughter in the Mediterranean."

If confirmed, the 700 deaths would bring the number of dead in the Mediterranean to 1,500 so far this year. That's a nine-fold increase over the first four months of last year. In 2014, more than 3,000 migrants perished in the Mediterranean, the highest on record. With the migrant crossings becoming more frequent as the weather turns warmer, the UNHCR and the emergency rescue services fear the death toll could set a new record in 2015.

The International Organization for Migration (IOM) estimates that 20,000 migrants have reached Lampedusa, Sicily and other parts of the Italian coast since the start of the year. More than 90 per cent of all migrants try to reach Italy.

The civil wars and humanitarian crises in Syria, Libya and parts of sub-Saharan Africa, notably Somalia, are producing a steady stream of migrants. Tens of thousands of them end up as clients as of traffickers in Libya, who appear to operate freely in a country whose security and civil structures have broken down since the Colonel Gadhafi's death.

Ms. Metsola, who has been campaigning for a broad response to the Mediterranean refugee crisis, said the traffickers are ruthless and have no regard for human life. "The number of migrants is not actually increasing," she said. "It's the number of deaths that have increased."

She said the traffickers sometimes lure migrants by showing them relatively large and safe boats in Libyan ports. But once they are aboard, they are taken offshore and, at gunpoint, forced onto small, dilapidated boats with no safety equipment and no crew with seagoing experience. The traffickers then return to shore on the safe boats and repeat the bait-and-switch game, Ms. Metsola said.

On April 13, traffickers fired shots in the air as an Italian tugboat and an Icelandic coast guard vessel that were taking aboard migrants from an unseaworthy wooden boat off the Libyan coast. The traffickers were on a speedboat and fired their guns in an attempt to recover the wooden boat, so it could be used again.

"This is a sign that smugglers in Libya are running short of boats and are more willing to use weapons to recover those used to transport the migrants," said Frontex executive director Fabrice Leggeri.

Ms. Metsola has called the scaled-back Triton program wholly inadequate and wants more ships devoted to the operation, as do the Italians. She is the lead author of an EU report that will say that the root causes of the migration crisis, such as the proliferation of human traffickers in Libya, have to be tackled.

In his regular papal address on Sunday, Pope Francis expressed his sorrow for the victims of the mass drowning. "These are men and women like us who seek a better life," he said. "Hungry, persecuted, injured, exploited, victims of wars. They were looking for happiness." 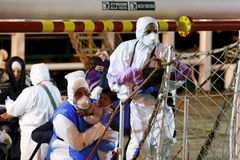 Italy rescues nearly 1,000 migrants from boats in the Mediterranean
March 4, 2015 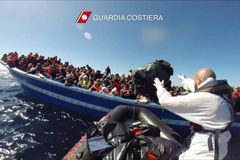 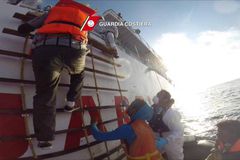