Zsolt Varady remembers the day the Iron Curtain fell. His father, who took the long view on such things, told him it might take 20 years for the good times to arrive, but he was sure from that point on things were going to get better in Hungary.

Twenty-five years later, Mr. Varady has had successes his father could never have predicted. He invented a wildly popular social network – International Who Is Who – two years before Facebook, making him famous and, for a while, rather rich. But Hungary, he feels, hasn't become the country his father promised him that day in 1989.

For that he blames the country's "nightmare" government, and in particular the populist Prime Minister Viktor Orban, who has been in power since 2010. Now Mr. Varady is embracing a role that his father thought would no longer be necessary – he's a political activist, confronting a government he says has grown too close to Moscow.

Mr. Orban over the past 12 months has made Hungary the enfant terrible of the European Union, first by sympathizing with Russia in the conflict over Ukraine, Hungary's neighbour to the east. Then Mr. Orban shocked Western ears by expressing admiration for the system Vladimir Putin has built, and declaring he wanted build an "illiberal democracy" in Hungary.

"It's kind of a nightmare," Mr. Varady said, his soft voice and gentle manner at odds with the role he's taken on as the face of the swelling anti-Orban movement. "We are getting closer to dictatorship, but we're not there yet."

Political activism is back in Hungary – tens of thousands took to the streets this fall to hear Mr. Varady and other speakers condemn what they see as Mr. Orban's authoritarian turn, and another mass protest is planned for Tuesday – and so is geopolitics. This country of 10 million people in the heart of Europe is once more the prize in a Cold War-style struggle for influence between Russia and the West.

To the consternation of Washington and Brussels, it's Moscow that holds greater sway here, signing a succession of economic pacts that have bolstered Mr. Orban's government, allowing him to dramatically slash utility prices on the eve of elections that saw his Fidesz party win a second consecutive majority government earlier this year. The return price, many feel, has been Hungary's deference to Russia on matters of foreign policy, including the Orban government's decision this fall to stop pumping natural gas (that it had purchased from Russia) into Ukraine, heightening the effects of a Russian cutoff in gas deliveries to the country.

Last month, Mr. Orban's government removed the blue-and-gold European Union flag from the front of the country's gothic-style parliament building, controversially replacing it with the banner of ethnic Hungarians living in neighbouring Romania.

It's all surprising coming from a country that is a member of both the EU and NATO. U.S. Senator John McCain revealed the depths of Western concern earlier this month when he criticized the newly appointed U.S. ambassador to Budapest, Colleen Bell – suggesting that a former producer of TV's The Bold and the Beautiful was an inappropriate candidate for dealing with a "neo-fascist dictator getting close to Russia."

But while Mr. Orban's opponents have shown their strength – the surprisingly large protests this fall forced the government to back down on plans to introduce a tax on Internet traffic – their calls for Mr. Orban to step down arguably lack the legitimacy of Hungary's 1956 and 1989 uprisings against Communist rule.

Mr. Orban and his Fidesz party, after all, handily won re-election in April, capturing a two-thirds majority in parliament – despite seeing its share of the popular vote drop from 53 per cent to 45 per cent – then followed that up by winning local elections this fall in 22 of Hungary's 23 largest cities. Even critics admit that Mr. Orban and Fidesz reduced the country's deficit and curbed unemployment during their first term.

Zsoltan Kovacs, a spokesman for the prime minister, said Hungarians admire Mr. Orban for the same reason he upsets many in the West – he makes decisions based solely on what he sees as the country's national interest. "Mr. Orban is a charismatic figure, and the political means have been provided to make decisions, to exercise leadership. Europe really doesn't like leadership."

Mr. Kovacs said Hungary had a "pragmatic" relationship with Russia, and that it's "offensive to the core to come with the argument that Hungary is trying to switch or shift sides."

Despite the election wins, it's becoming less clear that Hungarians support Mr. Orban's new course. A poll released Thursday suggested a massive drop in support for Fidesz – from 38 per cent support to 26 per cent – since the October street protests over the proposed Internet tax.

"Orban's popularity in these past two months has collapsed. One third of his voters have left him," said Andras Deak, a senior research fellow at the Hungarian Academy of Sciences. The problem, Mr. Deak said, is the urban liberals taking to the streets against Mr. Orban don't see a political party they trust to represent them. (The same poll put Jobbik, a far-right movement known for its anti-Semitic and anti-Roma rhetoric, in second place.) "Right now, it's not Orban who is strong, but the opposition who is weak," Mr. Deak said.

Which is where the comparisons to Mr. Putin have their greatest poignancy. Since Fidesz won its first landslide election in 2010, Mr. Orban has seen party loyalists installed in key posts at the state Media Authority, giving them oversight over an increasingly compliant media scene. Tweaks to the election law ahead of the 2014 vote helped ensure Fidesz would retain its two-thirds majority in parliament even as voter support fell.

Mr. Orban's "illiberal democracy" seems intended to produce what Mr. Putin's "managed democracy" has established in Russia: a system where elections are held, but the result is hardly in doubt. Monitors from the Organization for Security and Co-operation in Europe gave Hungary's 2014 election the same description they regularly bestow on Russia's votes: "free, but not fair."

"He's authoritarian, definitely. The rule of law is something that's not very important for him. The ability to execute his political ideas is what's important for him," said Kornelia Magyar, director of the Progressive Institute, a think tank based in Budapest.

But she said Mr. McCain was exaggerating when he called Mr. Orban a dictator. Other analysts say Mr. Orban is restricted in how far he can go by the fact Hungary is a member of the EU, its economy reliant on transfers from richer parts of Europe that are already warning of possible repercussions for Mr. Orban's turn to the east.

Opponents nonetheless fear the 51-year-old Mr. Orban – who also expressed admiration for Turkey's long-ruling Tayyip Erdogan and China's Communist Party in the same September speech – intends to cling to power as long as his political role models have.

Every day since August, a small crowd of anti-Orban protesters has camped out in front of the Hungarian parliament building, their tents topped by the EU flag that's been taken down by the government.

"We don't like the direction where the country is headed," said Ilona Hutvagner, a 65-year-old retired librarian, standing in front of a handmade sign reading "Delete Viktor." "We are not afraid to go into the streets any more. We are forced to." 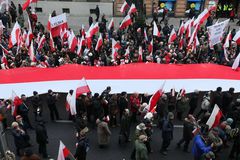 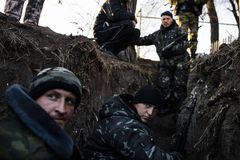