As an international court launches the world's first attempt to prosecute a jihadi for the war crime of cultural destruction, defence lawyers are seeking to turn the trial into a battle over "the definition of the divine."

The landmark case in The Hague, focused on the destruction of ancient shrines in Timbuktu, is emerging as a clash between two world views, part of a broader global struggle over the meaning of Islam. While prosecutors portray the cultural destruction as an attempt to annihilate a civilization, the defence sees it instead as simply a different "vision" of "good over evil."

Ahmad al-Faqi al-Mahdi, an Islamist radical from northern Mali, is accused of war crimes before the International Criminal Court for allegedly orchestrating the destruction of nine ancient shrines and a mosque door with pickaxes and iron bars after the historic city of Timbuktu was captured by jihadis in 2012.

"What is at stake here is not just walls and stones," prosecutor Fatou Bensouda told a pretrial hearing on Tuesday.

"Such an attack against buildings dedicated to religion and historic monuments falls into the category of crimes that destroy the roots of an entire people," she said.

"Let there be no mistake: The charges we have brought against Mr. Ahmad al-Faqi al-Mahdi involve most serious crimes. … They are about a callous assault on the dignity and identity of entire populations. … To destroy the mausoleums is to erase this element of collective identity that the people of Timbuktu built through the ages. It means the annihilation of a civilization's landmark and crucible."

Timbuktu was one of Africa's intellectual and spiritual capitals in the 15th and 16th centuries, famed for its universities and scholars. Many of those scholars became Muslim saints, and Timbuktu became known as the "City of 333 Saints." When the jihadis destroyed the mausoleums of saints during their occupation in 2012, they were destroying the city's identifying symbol, the prosecutor said.

The international court is aiming to use the prosecution to deter Islamist radicals in Syria, Iraq, Libya and elsewhere who have begun destroying historic shrines and cultural monuments, denouncing them as totems of idolatry.

A defence lawyer, Jean-Louis Gilissen, called him "an intelligent man, a reasonable man, a learned intellectual" who will testify that he believed he was "doing what is right" and "seeking the means to allow his conception of good over evil to prevail."

Mr. al-Mahdi had destroyed only the "coverings" of the ancient tombs because he wanted to "liberate" them and introduce a greater "purity," the lawyer said. He argued that the jihadi differed from the local worshippers at the shrines because of his belief that the saints could not share the "divine" with God. "We're talking about two visions of the world that are in contradiction," he said.

But prosecutors showed the judges a video clip of Mr. al-Mahdi in the streets of Timbuktu with an assault rifle slung over his shoulder as he issued edicts to the population. They said he had supervised the attacks on the ancient shrines, had personally participated in five of the attacks, had publicly defended and justified the destruction and had even provided "food and drink" to the attackers.

On the eve of the attacks, they said, he had drafted a sermon justifying the destruction and had ordered Islamic preachers to read the sermon to their faithful.

They said Mr. al-Mahdi was the leader of Hisbah, a morality brigade that enforced harsh fundamentalist rules on the city and its traditionally moderate Muslim people during the occupation.

In an interview with local journalists in 2012, he had bragged of how his brigade has forced Timbuktu's women to be veiled in public and to stay at home if they violated the new rules.

French troops helped recapture Timbuktu from the jihadis in January, 2013.

A panel of judges will rule within 60 days whether to confirm the war-crimes charges and proceed to a full trial. 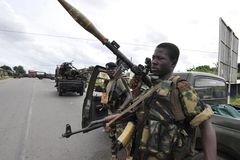 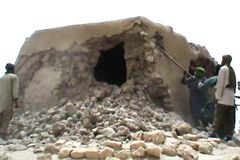