The man accused of killing three people at a Colorado Planned Parenthood clinic stunned a courtroom Wednesday when he declared himself a "warrior for the babies" and said he was guilty and won't go to trial.

Robert Lewis Dear, 57, made the outburst before he was formally charged with 179 counts of first-degree murder, attempted murder and other crimes.

Bearded, unkempt and cuffed at the wrists and ankles, Dear repeatedly disrupted the hourlong hearing, interrupting his public defender, Daniel King, and objecting to King's attempts to limit publicity in the case.

King – who represented Colorado theatre shooter James Holmes – has asked the judge to impose a gag order on participants in the Planned Parenthood case before a trial.

"You'll never know what I saw in that clinic. Atrocities. The babies. That's what they want to seal," Dear shouted at one point, prompting a deputy to squeeze his shoulder in an effort to quiet him.

King did not address the outbursts but raised doubts about whether Dear is competent to stand trial, saying defence attorneys wanted investigators to turn over evidence as soon as possible so they could assess the "depth of his mental illness."

"Do you know who this lawyer is?" Dear then exclaimed of King. "He's the lawyer for the Batman shooter. Who drugged him all up. And that's what they want to do to me."

Holmes was on anti-psychotic medication during his trial this year in the 2012 shootings that killed 12 people and wounded 70. He was sentenced to life in prison.

Colorado Springs police have refused to discuss a potential motive in the Nov. 27 attack, which wounded nine. But even before Wednesday's startling outbursts, there was mounting evidence that Dear was deeply concerned about abortion.

He rambled to authorities about "no more baby parts" after his arrest. And a law enforcement official told The Associated Press this week that Dear asked at least one person in a nearby shopping centre for directions to the clinic before opening fire. The official was not authorized to publicly discuss the investigation and spoke this week to The Associated Press on condition of anonymity.

On Wednesday, Dear interjected as Judge Gilbert A. Martinez discussed a pretrial publicity order, saying, "Could you add the babies that were supposed to be aborted that day? Could you add that to the list?"

Later, he accused his attorneys of being in "cahoots" with Planned Parenthood to "shut me up."

"I want the truth to come out. There's a lot more to this than for me to go silently to the grave," he shouted.

Dear has lived in remote locations without electricity or water and was known to hold survivalist ideas.

One of his three ex-wives, Barbara Mescher Micheau of Moncks Corner, South Carolina, said he vandalized a South Carolina abortion clinic at least 20 years earlier, announcing to her that he had put glue in the locks of its doors, a common protest technique among activists trying to shut down abortion clinics.

Killed in the attack were Garrett Swasey, 44, a University of Colorado-Colorado Springs officer who rushed to the scene; Ke'Arre Stewart, 29, an Iraq war veteran who was accompanying someone at the clinic; and Jennifer Markovsky, 35, who also accompanied a friend at the clinic.

Five other officers were shot and wounded in the rampage.

Colorado Springs Mayor John Suthers said Monday that responding officers rescued 24 people from inside the clinic building and helped remove 300 people from surrounding businesses where they had been hiding while the shooting unfolded.

Martinez set the next hearing for Dear for Dec. 23. A first-degree murder conviction can lead to life in prison or the death penalty.

At the end of Wednesday's hearing, the judge looked at Dear and said, "Are you finished?" 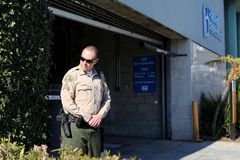