This should not have been a good week for Hillary Clinton. Not in a normal election year.

To start things off, the father of the terrorist who massacred 49 people in Orlando two months ago was spotted at one of her rallies and her campaign was slow to figure out how to respond. On Wednesday, something that spoke not just to bad optics but to bad ethics: newly released e-mails that showed lines between the U.S. State Department and her husband's Clinton Foundation alarmingly blurred while she was secretary of state. Along the way, she came under fire from liberals for reportedly seeking an endorsement from Henry Kissinger. If she needed to change the channel from any of this, an underwhelming economic speech on Thursday would not have done it.

But Ms. Clinton did not need to change the channel, because in this very abnormal election, she does not have to suffer bad weeks. Not as long as the unhinged narcissist against whom she is campaigning sucks up all available oxygen and spits it out as bile – in this case by, among other things, seemingly joking about an assassination or violent uprising if she wins, and accusing both her and the current President of founding the Islamic State.

Because it is impossible to look away from Donald Trump, we hardly even get to consider the paradox of the person likeliest to occupy the White House in a few months: that someone who sees herself as unusually hard-luck, and has allowed that to dictate how she conducts herself as a public figure, has emerged as one of the luckiest politicians in U.S. history.

Ms. Clinton's persecution complex – the one that caused her to complain during Bill Clinton's presidency that they were victims of a "vast right-wing conspiracy" and more recently that "there's the Hillary standard and the standard for everyone else" – is a matter of public record.

Believing that she will be treated unfairly, she refuses to hold news conferences while seeking her country's highest office, and generally gives little of herself publicly despite supposedly being more animated and relatable in private.

Worse, her defensiveness leads her into precisely the sorts of situations she fears. Ms. Clinton will, say, set up private e-mail servers while secretary of state because she believes others are waiting to pounce on her communications; when that eventually blows up into controversy, with no less than the head of the U.S. Federal Bureau of Investigation saying she recklessly endangered national security, the criticism reinforces her view that her minor mistakes get blown out of proportion.

Her paranoia is not entirely without foundation. The scandal-mongering of the 1990s, from inquiries into Mr. Clinton's extramarital affairs to bogus claims of foul play in a staffer's suicide, clearly left their scars. Endless Republican attempts to prove her directly responsible for American deaths at the diplomatic compound in Benghazi, Libya, in 2012 no doubt rekindled memories of that era. As a trailblazing female politician, she has faced stomach-turning vitriol from some corners – something about which the "Trump that bitch" T-shirts at her opponent's rallies continue to serve as a reminder.

But the narrative that Ms. Clinton clearly sees for herself, that she faces unusually long odds, is now strikingly at odds with her absurdly easy path to the presidency.

It started even before she was up against Mr. Trump. Out of some sense that it was her turn, combined with a belief her campaign organization was too formidable, most other would-be contenders for the Democratic nomination declined to take her on – a decision they may have regretted when she struggled to best Bernie Sanders, a septuagenarian socialist with a tenuous connection to the party, little national profile at the campaign's outset and an unwillingness to challenge her on the ethical issues that are her biggest weakness.

Ms. Clinton is not the first person to win her party's nomination against weak competition. But she might be the first to do so and then become the favourite for the presidency merely by virtue of appearing to be a sane, functional adult. (One would have to go back to 1964, when Lyndon Johnson beat Barry Goldwater, to find to find anything even vaguely resembling this.)

Fortunately, she does more than clear that extremely low bar. At minimum, she is smart, experienced and genuinely interested in the mechanics of government.

But against any other Republican nominee of the past half-century, that would not be enough – not when negative perceptions of Ms. Clinton's other attributes, particularly her trustworthiness and concern for regular people, leave her with historically low favourability ratings. Her saving grace is that, improbably, she is up against an opponent whose ratings are even worse.

Against anyone else, she would also struggle to energize the coalition of Democratic supporters – especially minority voters – who came out in record numbers for Mr. Obama. As it is, Mr. Trump is doing the motivating for her, in a way only an overtly racist candidate could.

Her good fortune might not last forever. Mr. Trump can't even be written off just yet: Not long ago, polls showed him within striking distance of her, and he might still be there if he were capable of going a few days without embarrassing himself, and forced more scrutiny upon her during weeks like this past one.

And the moment Ms. Clinton gets to the White House, if indeed she does, she will be judged against a higher standard than Mr. Trump. Her best play for now is probably to stay out of his way while he self-destructs. She should also reconsider her perception of being perpetually under siege, before it leads her into more mistakes that eventually make for self-fulfilling prophecy. 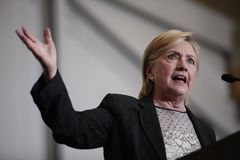 Donald Trump and the power of negative thinking
August 12, 2016 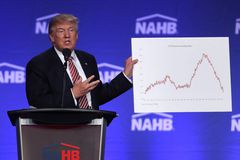 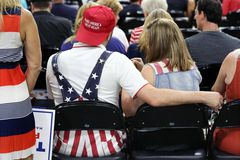