Adriana de Rezende Fereira accepts that her husband will never separate lights and darks – he turns on the washing machine, and that's more than most women she knows can say. She accepts that he will never iron, because he cleans the bathroom now and again. But the thing that may drive her over the edge, she says, is the way she must lavish him with praise when he washes the dishes without her having to ask.

"I have to say things like, 'Nice job! You hung up your towel!' Because it's just like with kids: You have to say 'good job' so that they keep doing it," said Ms. Fereira, 33, about her husband Roberto Schilling, 34.

The Fereira-Schilling household may sound rather thick with strife, but in fact this Rio family is doing better than many others in weathering a crisis erupting in Brazil's middle class. Several Brazilian laws – some old, one new – have combined of late to produce unexpected consequences. The result is feverish negotiation – often accompanied by slammed doors and banged coffee cups – in thousands of marriages.

The ingredients in this domestic tempest are these. The great majority of middle-class women work, motivated both by an increasingly equal society and a wildly escalating cost of living.

But the Brazilian school day is just four hours long, so kids attend in morning or afternoon but, typically, are home half the day, right through high school. There is no tradition here of home-based daycare, no public childcare, and historically only limited private daycare.

Most significantly, the government has passed new legislation capping the hours maids and nannies can work and mandating overtime pay after eight hours – which has left many in the Brazilian middle class convinced they "can't afford" the help they typically have to cook, clean and mind the kids.

It's one of many ways that daily life in Brazil is being rapidly remade. The economy has grown at dizzying rates over the past decade, creating millions of new jobs. The Brazilian government has harnessed much of that new wealth to fund an array of social welfare schemes, trying to narrow the gulf between rich and poor that yawned so wide since the country's creation. Brazil's rich are still resplendently rich, but its poor are less poor, and those in the middle are finding that much of what they have taken for granted is shifting under their feet. The biggest change is in class dynamics, but gender relations are being affected, too.

The domestic worker legislation came into force last March, although Congress has yet to agree on many of the specifics, such as what pension, if any, a domestic worker should get. But even in its embryonic form, this new law has helped precipitate a seismic upheaval. The popular perception is that if a maid or nanny must be paid minimum wage (which is 802 real, or $375 a month, in Rio) plus about another $100 in pension and health insurance, this is too expensive. "You can't! You can't afford that," said Ms. Fereira, who was used to paying 600 real before the law came in.

In fact, economist Joao Pinho de Mello notes, Brazil's rates for domestic work are still low compared to most other OECD countries. But because people are used to paying almost nothing for constant service, they perceive the new rates as unbearable. "You hear middle-class people talking about this constantly now," he said.

As a consequence of the higher wages, many have cut back on their domestic help and are struggling to cope. "I work all day, I come home, I cook, I clean, I put the kids to bed, and maybe once a week my husband orders pizza so that's 'his share,'" said Tania Alvares, 38, a corporate lawyer. "He knows there's no maid any more. But he's a Brazilian man, so hell will freeze before he mops something."

Ms. Alvares's husband, a manager with a large multinational mining company, was not willing to discuss the state of domestic relations in their home. But Natalia Fontoura, who co-ordinates research into gender equality at the Institute for Research in Applied Economics, said the data show that Brazilian women do 27 hours of housework for each 10 done by their husbands. "We've been collecting data for 12 years and in that time we see very little change – the one we see is a very small reduction in the amount of hours women dedicate – but no increase in the men's side as a counterpart."

The Brazilian consumer market is adapting swiftly to meet this new demand – more labour-saving household devices are for sale (dishwashers are a new trend), and there are more prepared foods available. The government says it wants to provide more daycare, and to extend the school day – the problem is that most schools do two shifts a day, so it's not easy.

Private daycares, once considered an unusual choice here, are swamped with applicants. At the Lagoa Education Centre in the leafy Jardim Botanico neighbourhood, enrolment for toddlers doubled when the new school year started in August and now there is a waiting list. Elizabeth Joao Soto, the director, said mums arriving to enroll new children always "make a little speech" about how they think the daycare environment will be more stimulating than leaving the kids at home with "a stranger" – but she suspects the real reason is the new professionalization of domestic work.

The Brazilian middle class got used to what the economist Mr. de Mello calls a "distorted" standard of living through the many years of sharp inequality: a professional couple where only the husband worked would not consider it unusual to have a full-time, live-in maid, a full-time nanny, another helper on weekends, a driver, and a membership at a posh private club.

"When my brothers and sister and I grew up, we never ironed our own clothes, or made our own cup of coffee – we could have done it, we were grownups but we just would never think of it," Ms. Fereira said.

In 2008 Mr. Schilling, a musician, landed a job with Cirque de Soleil and the couple, with their then one-year-old son Joao, moved to Montreal – bereft without their maid. Soon they were discreetly observing the other Cirque families, with Ms. Fereira whispering to her husband, "Look! He's clearing the table!"

Mr. Schilling admits she does more but says he's carrying a fair share of the domestic workload. "I definitely do more than I used to, I got used to doing more in Canada," he said. He says he sees his friends doing more than their fathers did. And, intriguingly, he says he sees no signs of marital strife, that his male friends don't talk about it – while Ms. Fereira says her female friends constantly lament their domestic burden.

She says they will raise Joao and baby Alice to be self-sufficient, and she expects their generation will be different. But her own? "It's hopeless." Her husband stands out among their friends for his willingness to clean, she says – then adds with a grin, "We had only been back in Brazil for two weeks and I found him on the phone trying to hire a maid." 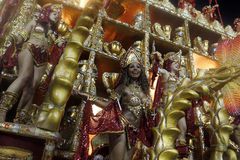 Brazil’s battle of the biographies is heating up
October 23, 2013 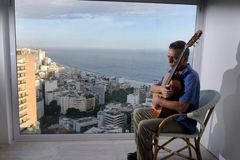