In 'failure of U.S. democracy,' China's strongmen see a chance to get stronger

As Trump polarizes American politics and the global tides of protectionism rise, China and other authoritarian regimes are looking on with schadenfreude – and the narrative of a new Cold War is taking hold, Nathan VanderKlippe says

Rodrigo Duterte is not much given to the formalities of office. The Philippine President is prone to swearing in front of the camera, sports loafers without socks and conducts his leadership duties in an assortment of athletic polos and short-sleeved patterned shirts.

But when he came to China last week, Mr. Duterte strolled next to President Xi Jinping in a buttoned-up black suit, a sartorial mark of respect that presaged his public comments to come.

"America has lost," Mr. Duterte said in Beijing. The Philippines, a 65-year U.S. ally, is prepared to "shift gears," he told his hosts, and "realign myself in your ideological flow."

Philippine President Rodrigo Duterte, right, is shown the way by Chinese President Xi Jinping before a signing ceremony in Beijing on Oct. 20, 2016. Read Nathan VanderKlippe’s full report on Mr. Duterte’s visit to China and what he said there.

But if his bold proclamation shocked outside observers, it was for many Chinese listeners the mere echo of an idea they have contemplated with a rising sense of certainty: The edifice of Western democracy is mouldering, while China's single-party rule stands ever firm.

"The ideological competition between democracy and authoritarianism was supposed to have died with the Cold War. But it has returned with a vengeance, powered above all by the rise of China," Columbia University's China expert, Andrew Nathan, wrote almost exactly a year ago.

In the fraught months that have followed, it has been hard to avoid an unsettling feeling that authoritarianism, for now at least, seems to have pulled in front.

Those making the argument can point to the willingness of voters in the United Kingdom to pull out of the European Union despite warnings of self-inflicted damage, the Colombia referendum that undercut a hard-won peace deal or the rise of a demagogue as a U.S. presidential candidate who has attacked the very legitimacy of that country's electoral system.

"We are seeing the failure of U.S. democracy," Zhang Zhixin, chief of American political studies at the Chinese Institutes of Contemporary International Relations, wrote in a September essay. Even if Donald Trump fails to reach the White House, "he has irreversibly damaged" the country's political foundation, Mr. Zhang wrote, while the Hillary Clinton campaign's own problems have "tarnished the so-called fair and transparent election system in which Americans take pride."

China's state-run media, too, have gleefully held up the fractious election as proof that a country that prides itself as a standard-bearer is no longer a beacon to the world.

"U.S. presidential elections are neither democratic nor civilized," the Xinhua news agency jeered. The Communist Party-run Global Times pointed out earlier this year that "Mussolini and Hitler came to power through elections, a heavy lesson for Western democracy." This week, the newspaper published a commentary by Wu Xinbo, director of the Center for American Studies at Fudan University, titled: "Presidential election chaos unearths flaws in U.S. political system."

But what is to many in China a stage comedy in real life – the U.S. "debates were kind of a joke; it's really funny," said Yan Xuetong, one of China's foremost international relations experts – it's one with consequences that could resonate for years to come, as Beijing seeks to turn its rivals' pain into its own gain.

"There is a German word for that, schadenfreude," said François Godement, director of the Asia and China program at the European Council on Foreign Relations.

What's happening in China is an "opportunistic profit-taking from the fact that the West globally is weakening," he said. "That, of course, literally fulfills China's best wishes."

Sprint through all three U.S. debates in three minutes

The 2008 financial crisis, which largely bypassed China, already boosted confidence among Chinese leaders in the effectiveness of their financial management. Political upheaval among democratic nations this year is similarly fuelling a new self-assurance in China's political management.

"Many Chinese look at this with a sense of revenge: 'Look, you guys have been criticizing us and our model. Now, look at your model. It looks like your model is becoming worse than ours,' " said Xie Tao, a political scientist at the Beijing Foreign Studies University.

The Chinese model, it's worth recalling, is one where the party responsible for the horrors of the Cultural Revolution and the Tiananmen Square killings remains in power, overseeing a police state that spies on its people and imprisons dissidents, even as it struggles to clean up an environment badly damaged by years of the unbridled economic growth it pursued to maintain legitimacy.

Porcelain plates with images of Mr. Xi and his wife, Peng Liyuan, are displayed at a souvenir shop near Tiananmen Square. Below are previous Chinese leaders Mao Zedong, Deng Xiaoping, Jiang Zemin and Hu Jintao.

But China has nonetheless profited from weakness abroad and its own economic strength to challenge the United States as the pivotal player in world affairs. China's rising allure in other nations – take Hungary, and President Viktor Orbán's open pursuit of an "illiberal" system partly inspired by China, and the more recent spread of that idea to Poland – only expands its influence.

China's leaders can claim success in breaking the perceived link between capitalism and democratic leadership. Like Singapore, they have built a vibrant market economy while maintaining a heavy-handed, although stable, political state. It's a system many Western observers long believed impossible, but which Beijing sees as a model worthy of replicating elsewhere.

Meanwhile, China has built entities such as the Asian Infrastructure Investment Bank as alternatives to global institutions that have held sway since the Second World War, while it presses for a more prominent role in others. It wants one of its own to head the United Nations Department of Peacekeeping Operations.

The aim is to shape world affairs as it sees fit, a mixture of maintaining the status quo – smoothing the path for global trade – and departing from long-standing practices. It's unlikely that a UN under Chinese control, for example, would attempt to halt genocide in another country, since China also has an interest in barring outside organizations from intruding on its own concerns. Take China's dismissal of the Permanent Court of Arbitration, which ruled against its claims in the South China Sea.

The United States, for its part, has sought to maintain dominance through its "pivot" to Asia, dispatching aircraft carriers, diplomats and bankers to bring security assurances and goodwill across the Pacific. But Lawrence Summers, the former U.S. treasury secretary and president emeritus of Harvard University, has warned that the tremors Mr. Trump has sent through the U.S. system could persuade others, particularly in Asia, to "tilt from a more erratic America towards a relatively steady China."

"The United States has always been governed by the authority of ideas, rather than the idea of authority," Mr. Summers wrote.

Even if Mr. Trump loses, the degree of support he has garnered suggests that in the United States, as elsewhere, many disagree. People around the world are indicating their "preference for strongman rule," said Shi Yinhong, director of the Center on American Studies at Renmin University of China. As challenging economic and political problems arise, "existing liberal democracies seem not to function so well to deal with these issues," Prof. Shi said.

It's "already happening," he said, both in authoritarian and democratic guise. Mr. Xi and Russian President Vladimir Putin are wildly popular at home, Western polling firms have found. But Japan's nationalist Shinzo Abe has stayed in power far longer than his recent predecessors, South Korea's Park Geun-hye wants to amend the constitution to allow presidents to serve longer, electors in the Philippines this year picked Mr. Duterte over more moderate alternatives and British voters followed the charismatic lead of Boris Johnson and Nigel Farage to the Brexit polls. 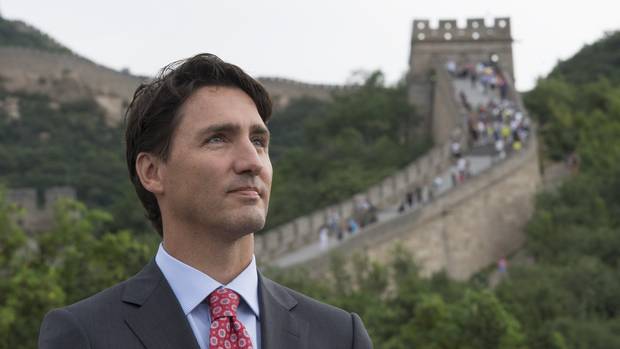 Get a full recap of the Canadian Prime Minister’s official visit to China last month, four decades after his father paved the way for Sino-Canadian relations in the 1970s.

Meanwhile, China is promoting the idea that a powerful chief is essential for national success. "Strong central leadership as well as a pioneering figure is especially critical for a rising world power," the Global Times said this week, reporting on an online poll that, it said, showed broad support for the idea.

Of course, Beijing's confidence must be measured against U.S. resiliency – and China's own domestic problems. The shattering changes to the structure of Western economies, where discontent has been provoked by the collapse of bedrock industries that have eroded employment, are beginning to take shape in China too. Huge numbers of manufacturing jobs have left for neighbours with cheaper workers; robots are replacing others. Slowing growth and a widening wealth gap have propelled a dramatic rise in Chinese labour protests, a difficult challenge for Beijing to manage.

At the same time, Mr. Xi's powerful grip has been consummated by a crackdown on corruption and individual freedoms that has damaged China's standing abroad and spread dissatisfaction among its own people.

"What society would root for more controls on freedoms, more inhibitions on the development of civil society, more big government intrusiveness into private lives?" said Roy Kamphausen, senior vice-president for research at the National Bureau of Asian Research in Washington, D.C.

Inside China, too, the mocking of the U.S. election has been leavened by a potent counter-thought: Americans get to choose their leaders, even if the process is fraught with problems and occasionally risible. Everyday Chinese do not.

"Any sensible person in China would have second thoughts when you say our system is now beating the American system," said Prof. Xie of the Beijing Foreign Studies University. "No sensible person would jump to that conclusion."

Visitors walk by an image of Mr. Xi at an exhibition on the Long March at the military museum in Beijing on Oct. 24, 2016.

China also stands to suffer from the forces of nativism and protectionism plaguing democratic nations. To continue growing, Chinese companies need to expand abroad. But they now "risk being faced by more and more no's. Look at what's happening, for example, with mergers and acquisitions by Chinese firms. It's becoming more difficult," said Mr. Godement of the European Council on Foreign Relations.

Still, those amount to lesser details in a broader global narrative, of authoritarian forces marshalling arms, strength and influence, even as liberal democracies struggle with internal electoral distractions.

"We are back to a new Cold War," Mr. Godement warned. "It's about the survival of political systems."

Democratic nations, of course, have endured countless crises and come out stronger. But they remain relative infants in a history of human governance that has not often given people the right to choose their own leaders.

"In today's society, there is a lot of complacency about what we have achieved," Mr. Godement said. "People don't fully realize that what was gained could be lost."

THE GLOBE IN CHINA: MORE FROM NATHAN VANDERKLIPPE