European scientists studying global carbon dioxide emissions, which make up most of the greenhouse gases that are being released in to the atmosphere through human activity and are driving climate change, are offering a ray of hopeful news.

While emissions continue to rise, they are slowing down – and that could be a permanent development, say researchers at the PBL Netherlands Environmental Assessment Agency and the European Commission's Joint Research Centre, which together release an annual report.

But the rate of growth appears to be slowing – and that is the silver lining in what is still seen by many politicians and scientists as an urgent global crisis that requires governments and businesses to set – and meet – targets to reduce greenhouse gas emissions.

In 2012, the report states, carbon dioxide emissions went up 1.1 per cent – or "less than half the average annual increase of 2.9% over the last decade." That figure impressed researchers in a year when there was reasonable economic growth of 3.5 per cent.

"This development signals a shift towards less fossil-fuel-intensive activities, more use of renewable energy and increased energy saving," the report adds.

Behind the slowdown are three of the world's largest overall emitters of carbon dioxide, which account for more than half of the emissions: China, the United States and the European Union.

China, with its robust economic growth, has seen carbon dioxide emissions jump by an average of 10 per cent every year over the past decade, but in 2012, it rose by 3 per cent. Researchers were further encouraged by a drop of 4 per cent in emissions in the United States, and a 1.6-per-cent decline in the European Union last year.

An Environment Canada report released last week projected a mainly flat trend line in greenhouse gas emissions with an increase in the years leading up to 2020 and the federal government missing its own targets to reduce emissions.

"The general picture remains that most sectors and regions reduced their emissions in absolute terms or stayed pretty much flat. One sector that is the exception is the [Alberta] tar sands. Those emissions will offset the progress in other parts of the country," said Christian Holz, executive director of Climate Action Network Canada.

An Environment Canada report last week painted a bleak picture of rising greenhouse gas emissions by the 2020 with little sign that they can be slowed or reversed – or that the federal government will be able to meets its own emissions reduction targets.

In an interview, report author Greet Maenhout credited China's economic slowdown, the shift to greater "energy effectiveness" and the use of renewable sources of energy such as hydroelectric power for the slower growth in global emissions.

But China remains a coal producer and the largest coal importer – a fossil fuel that is a major a contributor to greenhouse gas emissions, she added.

Still, the overall message, according to Ms. Maenhout, is that she and her colleagues expect carbon dioxide emissions to continue growing globally but at a slower rate. "The small increase in emissions of 1.1% in 2012 … may be the first sign of a more permanent slowdown in the increase in global CO2 emissions, and ultimately of declining global emissions," the report states.

Europe and the United States are the two other big emitters of CO2 – and, in both cases, economic activity and shifts in energy sources could keep global CO2 growth stagnant instead of dramatically soaring – or even dropping in the short term.

In Europe, Ms. Maenhout said, "you don't see a big increase in economic activity in energy-intensive industries." That and the ongoing booming shale gas industry in the United States also contributed to the slowdown in global CO2 growth. 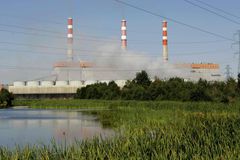