It's easy to get lost in this city of 80,000, with its labyrinthine network of roads spread over several hillsides, and most buildings clad in identical white stone. Even most of the people dress pretty much alike – hard to tell one branch of the Haredim (the ultra-Orthodox) who live here from another.

It's a city where most men avert their eyes at the sight of a woman not cloaked in black, or walk a zig-zag pattern down a sidewalk to avoid coming close to a female Western photographer and interpreter.

But beneath the monochrome scene and apparent shyness lie some of the fiercest religious tensions in Israel, tensions that pit one branch of Judaism against another and that often turn violent.

As Israelis prepare to vote in the Jan. 22 national election, these are some of the issues foremost in the minds of the Haredim and other Orthodox Jews in mixed religious communities such as Beit Shemesh, Jerusalem and Bnai Brak. How the religious communities vote will play a crucial role in coalition building after the election.

Two decades ago, there were almost no Haredim in Beit Shemesh, a city built mostly for Moroccan Jews who arrived in Israel in the 1950s. These days, the friction between the ultra-Orthodox and less strict Jews has grown increasingly heated.

Just last week, a group dubbed "the Mod Squad" – for "modesty" – appeared at Tzviya Rosenberg's apartment door. The intimidating all-male Haredi committee had come to insist she give up her computer and telephone, and consent only to use what is known as a "kosher" cell phone, or one that prevents access to so-called "inappropriate content" such as text messaging, the Internet and sex lines.

Ms. Rosenberg, 48, a teacher and Orthodox Jew, flatly refused, knowing she risked retribution from thugs who often act as vigilantes.

"They told me I had to comply if we wanted to live in this community," she said. The Rosenbergs, whose practices are similar to most Orthodox Israelis, moved here 15 years ago, well before most of the men who came to her door. This was not her first run-in with the squad.

A few years ago, Ms. Rosenberg said she put a small Israeli flag in the window to mark Independence Day, only to have a gang pelt the apartment's windows with eggs when she refused to remove it.

Last week, the squad told Ms. Rosenberg she was on their list of "Israelis," a term the leader spat out, she said. In this part of Beit Shemesh, the most extreme anti-Zionist Haredim rule the roost.

"Most of our friends have packed up and left," she said.

Next year, her son's moderate Orthodox school may close for lack of students. "If that happens, we're out of here too," she said, explaining that she would never send him to a Haredi school where only religious subjects are taught.

Many of the Haredim say they won't vote next week as they don't support the state of Israel.

But the state certainly supports them. With almost all Haredi men studying for much of their lives in yeshivas, it is largely up to the women, mothers of 8.9 children, on average, to earn a living.

"We bring in very little," says Mali, 25, a mother of two, who, like most of the Haredim interviewed, declined to give her full name. "We need support."

The support mostly comes from the intervention of religious parties in the Knesset whose leaders often find a way to administer housing, health and welfare portfolios as part of a deal to join a coalition.

"Our taxes go to supporting these people," says an outraged Moran Pahima, 31, a secular mother of three young children who has lived in Beit Shemesh for 28 years. "It isn't fair."

On the other side, Haim Louk, a Sephardi Orthodox rabbi and renowned singer, sees nothing wrong with this arrangement. "The government should pay families to have lots of children, said Mr. Louk, a father of 11. "For Israel's security we have to ensure that Jews continue to outnumber Arabs" in Israel and Palestine.

The suave rabbi also objects to the idea of Haredi religious students serving in the military as many political parties now advocate. The army doesn't need the extra men, he argues.

Dov Lipman, a U.S.-born rabbi from the Haredi community, has led a fight against extremism in the city. He says that army service is "a matter of sharing the burden. … It also leads to men working outside the yeshivas, which is good for the economy."

He is worried that extremists have come to dominate his city and its municipal authorities.

Just a block from his home sits a massive concrete and marble building that was constructed to be a shopping mall serving large parts of the city. It was never finished, however, after repeated attacks on the building drove the contractor away.

"The extremist elements objected to such a facility being built here," he explains. Since it would have contained government services as well as stores, they argued it would have brought "undesirable elements" such as secular and less religious people into "their neighbourhood."

The deserted structure, its every window smashed, is "a sad reminder of the failure of our municipal leadership and our national government," Mr. Lipman says. "It's time to take back our city."

Mr. Lipman is running for election as the 17th placed candidate on the list of Yair Lapid's Yesh Atid party. 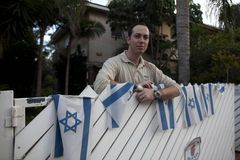 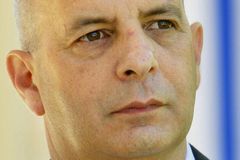