On the surface, the ceasefire deal reached to calm the fighting in eastern Ukraine is a triumph of diplomacy over force, a potential stepping stone toward a fuller peace agreement in this war-battered country.

But in the Ukrainian capital, many see only another triumph for Russian President Vladimir Putin, a diplomatic gain to match those that Kremlin-backed rebels have achieved on the ground in recent weeks.

The language of the deal agreed to Thursday in the Belarusian capital of Minsk is little different from a ceasefire that Mr. Putin and Ukrainian President Petro Poroshenko signed in the same city last September. The last Minsk ceasefire lasted a matter of either days or hours, depending on how you measure the violations.

The primary accomplishment of the September deal in Minsk – hailed at the time by Mr. Poroshenko as a "permanent ceasefire" – was to take the wind out of a North Atlantic Treaty Organization summit that began the following day in Wales. Suddenly, statements about the alliance's unity in confronting Russia had to be watered down to make supportive mention of the ceasefire.

This time, the ceasefire, negotiated in the presence of German Chancellor Angela Merkel and French President François Hollande, comes just as debate is heating up in the United States and Canada about whether to supply weapons to an outmatched Ukrainian army. If the deal holds even for a short while, that debate might quickly cool.

In the meantime, anyone looking for signs that this deal wouldn't last much longer than the last Minsk pact didn't have to look far: Ukraine reported that 50 tanks and 40 multiple-launch rocket systems crossed from Russia into Ukraine on Wednesday, even as the leaders were bargaining in Belarus.

This is how what many call Russia's "hybrid war" in Ukraine is waged – a thrust on the military front, followed by a parry on the diplomatic front. On the information front, Kremlin-owned media hail a breakthrough in Minsk, while denying there are any Russian soldiers in Ukraine who need to be withdrawn, which is one of the key terms of the deal. Russia is taking a beating on the economic front, but Mr. Putin is betting Ukraine's much faster collapse – and Europe's own economic struggles – will force the other side to blink before he does.

The body language of the leaders after 17 hours of talks said at least as much as anything they said or signed.

Mr. Putin emerged first from the negotiations, looking relaxed and upbeat. He joked that while the marathon negotiations hadn't been "the best night in my life," he said it was "a good morning because we have agreed on many things." The other leaders came out later, and sounded more concerned than celebratory.

Indeed, the deal appears to cement the gains the Russian-backed rebels have made on the ground in recent weeks, including the capture of Donetsk airport and the encirclement of the strategic town of Debaltseve, with Mr. Putin suggesting that the Ukrainian troops still in Debaltseve itself should withdraw before the ceasefire takes hold. The current front line, or whatever it is by midnight on Saturday local time, is the line from which Ukrainian troops will have to pull their heavy weaponry back.

Like the September agreement, this Minsk deal suggests that Donetsk and Lugansk will be given special autonomous status within Ukraine, effectively placing the Donetsk and Lugansk regions – which have declared themselves independent "people's republics" – outside the control of the government in Kiev, while assigning Kiev to resuming paying for social services in those regions.

But much of what else the two sides have agreed on was left unclear by the some of the same fuzzy language used in the first, failed Minsk deal.

The new pact calls for the disarmament of all "illegal armed groups" without naming them. To the Ukrainian side, that language clearly means that the pro-Russian rebels should disarm. The Kremlin would say it means the volunteer battalions that have proved the most effective fighters on the Ukrainian side.

The most important – and least detailed – point in the Minsk deal is a clause calling for a "new constitution to come into effect by the end of 2015, the key element of which is decentralization."

Russia has been pushing for Ukraine to be remade into a federal state, something along the lines of Bosnia-Herzegovina, with Donetsk and Lugansk given the power to veto foreign policy decisions by the government in Kiev. In effect, the Kremlin is seeking a tool to block any future Ukrainian attempt to join the European Union or NATO.

Mr. Putin said the new constitution needs to "take into consideration the legitimate rights of people who live in [Donetsk and Lugansk]."

Mr. Poroshenko – who is in for a political battle at home over any constitutional changes – was left tweeting assurances that he had not capitulated to the Kremlin's demands. "Ukraine will always be a unitary state. No federalisation whatsoever!" he wrote.

Nor were Ms. Merkel and Mr. Hollande smiling after the Minsk talks. Ms. Merkel, who worries that sending Western arms to Ukraine would provoke greater Russian intervention – and perhaps even a widening of the war, said there was now a "glimmer of hope," but that she was under "no illusions" about the deal's chances for success.

The U.S. administration was similarly skeptical. "The true test of today's accord will be in its full and unambiguous implementation, including the durable end of hostilities and the restoration of Ukrainian control over its border with Russia," the White House said in a statement.

Meanwhile, the debate about arming Ukraine just got even more complicated. Almost a year after this new style of conflict began with Russia's snap annexation of Crimea (a word not mentioned in the Minsk deal), the West is still looking for a hybrid war strategy of its own. 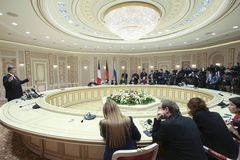