Nelson Mandela has three lingering memories of Canada. He remembers the bright Inuit children he met in Labrador, and the pneumonia he caught at Goose Bay airport. And he remembers the level of force used by Canadian security officials who roughed up a protester at one of his speeches.

His reminiscences of Canada are contained in his new book, Conversations with Myself, which went on sale around the world on Tuesday. The book is an extraordinarily candid glimpse of the South African liberation hero, including the most personal details that he has ever revealed about his family life, his emotions, his prison experiences and his political encounters.

He made his first visit to Canada in June of 1990, just a few months after his release from prison. The government of then-prime-minister Brian Mulroney had just announced a $5-million fund to help South African political prisoners and exiles. At one of his Canadian speeches, he was heckled by a protester who asked whether he would use the money for "murdering people."

Mr. Mandela said he wanted to respond peacefully and seriously to the protester, but she was "thrown out" by security officials. "They pushed her, you know, and she fell," he said, according to a transcript of a recorded conversation that is published in the new book.

"I tried to stop the thing, but I was late, and so they hustled me out," he said. "They treated her very roughly."

A few days later, after a tour of U.S. cities, his plane landed at the Goose Bay airport for refuelling. He says he caught pneumonia from the minus 15 C weather when he disembarked to talk to a group of Inuit students who had gathered outside the airfield fence.

Mr. Mandela had mentioned this conversation in his autobiography, Long Walk to Freedom, but he goes into much more detail in the new book, describing his astonishment at their education. "I had never seen an Eskimo and I had always thought of them as people who are catching … polar bears and seals," he said.

"As I chatted with them, I was amazed to find out that these were high-school children. … It was the most fascinating conversation, precisely because it was shocking. I was rudely shocked, awakened to the fact that my knowledge of the Eskimo community was very backward. … Although I was in the struggle, the freedom struggle, I should have … known that people anywhere, throughout the world, change from their less advanced positions."

The book, compiled by archivists from decades of letters and fragmentary writings by South Africa's first democratic president, reveals a man of astounding humility and sensitivity. He felt intense sympathy for some of his prison warders, he refused lucrative offers of money for media interviews, he was reluctant to serve as the first post-apartheid president until his comrades insisted, and he even recalls the anguish that he felt when he accidentally ran over a snake in his car in 1955. "My heart was sore," he said. "I just didn't see it, man. … It was no threat to me, and it left me with a very sad feeling."

In prison, he kept detailed records of the meagre food rations. He recorded, in one calendar, every teaspoon of powdered gravy that the prisoners were permitted. After his release from prison, he recalled his discomfort when he didn't slaughter enough sheep to feed the hundreds of village children who descended on his home for New Year's festivities in a poor region of the Eastern Cape.

Also included in the book is an excerpt from one of his presidential notebooks, containing a list of reminders. "Kofi Annan," the list says. "Oprah Winfrey. Elastic socks." 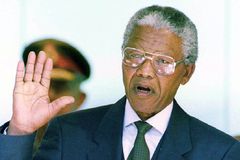