South Koreans are a patient people. They've lived for years with the nuclear-armed Kim dynasty to the north, waiting for international pressure to persuade Pyongyang to give up its weapons of mass destruction.

But that patience was decimated by what came next: three nuclear tests in the past seven years; obvious developments in Pyongyang's rocket technology and the miniaturization of warheads; a tearing up of the 1953 armistice that ended the Korean War; and regular threats to turn Seoul into a "sea of fire."

It's perhaps not surprising that South Koreans are fed up. A majority apparently now believe their country should also be developing nuclear weapons. Nothing else – not aid, not negotiations, not the presence of tens of thousands of U.S. soldiers on the Korean Peninsula – has deterred Pyongyang from pushing ahead with its nuclear effort. An opinion poll conducted by the conservative Asan Institute in the wake of North Korea's third test on Feb. 12 found that just over two-thirds of South Koreans support the idea of a domestic nuclear-weapons program.

It was a poll some saw as having an agenda. The Asan Institute was founded by Chung Mong-joon, a member of parliament who also happens to be the controlling shareholder of the massive Hyundai Heavy Industries Group and a key supporter of South Korea's newly inaugurated President Park Geun-hye.

"Seoul can no longer deal with a neighbouring rogue state armed with a machine gun, when it only has a piece of stone," Mr. Chung said shortly after Pyongyang detonated an underground device estimated to be several times as powerful as the two previous tests. Conservative newspapers seen as close to the South Korean establishment published editorials making similar arguments to Mr. Chung's.

The question is whether Ms. Park supports Mr. Chung's agenda. It's seen as highly unlikely that the United States, which is bound by treaty to protect South Korea from attack, would allow Seoul to develop its own bomb at a time when President Barack Obama is pushing for de-nuclearization in both Northeast Asia and the Middle East. But Ms. Park hasn't yet stepped up to squelch talk of a nuclear South Korea.

Perhaps that's because she has few other good options for dealing with the regime of Kim Jong-un, North Korea's 30-year-old supreme leader who has quickly established himself as being at least as unpredictable and confrontational as his father Kim Jong-il.

"I think [talk of a South Korean nuclear program] is being driven by anxiety and frustration. People feel [South Korea] has to do something. [They] look at the previous positions and policies as having been failures," said Daniel Pinkston, a Seoul-based analyst for the International Crisis Group.

Furious over a tightening of United Nations sanctions that followed the latest nuclear test, Pyongyang has unilaterally withdrawn from the 1953 truce and severed an emergency communications hotline between the North Korean and South Korean militaries.

On Wednesday, three South Korean media companies and three major banks had their computer networks paralyzed for several hours by a cyber attack Seoul believes was ordered by Pyongyang (although the malware was traced to a Chinese IP address). On Thursday, North Korea upped the rhetoric again, threatening to attack U.S. bases in Japan and Guam after B-52 bombers based in Guam took part in joint U.S.-South Korean military exercises. Air-raid sirens were reportedly heard in Pyongyang.

"Outbreak of war in Korea is now a matter of time," read an editorial on the website of its official Rodong Sinmun newspaper. "Nothing can prevent war from breaking out. When all our guns go off and missiles fly through the air, the whole of south Korea may be burned to ashes." It warned that residents of the South Korean islands of Yeonpyeong and Baekryeong, near the disputed sea border between the two sides, "better evacuate before it is too late."

North Korean artillery shelled Yeonpyeong Island in December, 2010, killing four people. Some of the island's 1,300 residents were already evacuating of their own accord when The Globe and Mail visited earlier this week.

Ms. Park's government has thus far responded with a mixture of tough talk and offers of détente.

The South Korean military warned earlier this month that it would strike at the North's "command leadership" if South Korean territory was attacked. But Ms. Park has also vowed to pursue "trust-building" in her dealings with Pyongyang. This week she asked Chinese President Xi Jinping to try to persuade the Kim regime to return to the negotiating table.

The rising talk of Seoul going nuclear reflects how public opinion in South Korea has hardened since the 2010 attack on Yeonpyeong. Ms. Park may find her options limited if Pyongyang decides to strike again.

"What a lot of us worry about is not just North Korea, but South Korea," said Hans Schattle, who teaches international relations at Yonsei University in Seoul. "The next time there's a provocation – a ship that's attacked, an island that's attacked – [the South Koreans] have backed themselves into a corner where they have to hit back harder. Then we get an escalation." 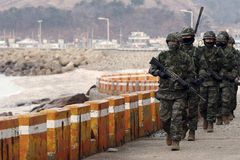 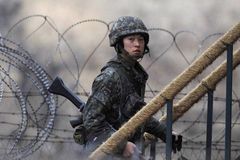 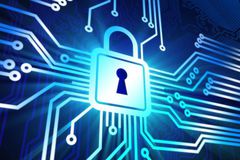 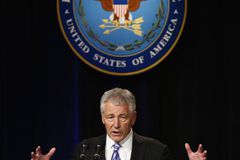