The Scarborough Shoal, a triangle of rocks and reefs in the South China Sea, is so small that much of it disappears underwater at high tide. And yet for the past seven weeks it has been the epicentre of a growing naval crisis, with China and the Philippines each dispatching ships and warning the other that it won't back away from the minuscule atoll.

Some say the South China Sea is a maritime version of Central Asia during the "Great Game," the 19th-century era in which empires jousted using proxy armies without ever coming into direct conflict. In Central Asia, it was Russia and Britain that duelled from the shadows. In today's South China Sea, it's the world's latest superpowers, China and the United States, competing over waters that produce one-10th of the world's fish, transit a third of the world's shipping and – if higher-end estimates are accurate – might hold up to 100 billion barrels of oil and six trillion cubic feet of natural gas.

At immediate issue is whose boats should be allowed to fish the lagoon, which is rich in sharks, giant clams and other species. But behind that argument lies a complex web of competing interests, one that sees a rising China trying to enforce an ancient claim to the entire 3.5 million square kilometres of the South China Sea and leaving smaller rivals to ask the United States for support and protection.

The map of the South China Sea is a jumble of overlapping claims; six countries in all claim a part of it.

Then there's the United States, which recently completed naval exercises with the Philippines near Scarborough Shoal. It is stepping up its military presence in the region as part of a strategic "pivot" toward Asia.

In China's eyes, that U.S. return to Asia is driving tensions. "Why is the Philippines so harsh toward China in this instance? Because they believe America will back them and China will do anything to avoid that confrontation," Xu Guangyu, a retired People's Liberation Army general, said in an interview.

The standoff at the Scarborough Shoal – named for a tea-trading ship that sunk there in the 1800s – began in April, when a Filipino warship blocked five Chinese vessels that it accused of illegally fishing in the area.

The Philippines says China has been trying to "bully" it and the other countries that border the South China Sea. Manila sent a diplomatic note to Beijing this week, complaining that it had spotted nearly 100 Chinese vessels in and around the Scarborough Shoal this week, despite mutual moratoriums on fishing in the area this summer.

China's Foreign Ministry said only 20 fishing and fishery patrol boats had been deployed. But tensions are such that China's nationalist Global Times newspaper declared two weeks ago that "peace will be a miracle."

The rhetoric from Manila has been equally dire. "It's possible that we may be tested," Filipino Foreign Secretary Albert del Rosario warned recently. "If we are tested, it's possible that everyone will need to make a sacrifice."

A look at some of the players in this "new great game":

China: Only in recent years has Beijing had the naval capability to back its claim to most of the South China Sea. In an indication of shifting priorities, the South Fleet of the People's Liberation Army Navy – long the smallest of the China's three fleets – is now on the verge of becoming the biggest as China expands its submarine base on southern Hainan Island. When China's first aircraft carrier, the refitted Soviet ship Varyag, is finally deployed (it's currently in sea trials), many expect it will also join the South Fleet.China has already fought two brief wars with Vietnam in 1974 and 1988 over the disputed Spratly Islands, a time when China's navy was a shadow of the force it is now. There seems to be a growing appetite here for another short conflict that would put its neighbours in line and show that Beijing was serious about its claims. "For those who infringe upon our sovereignty to steal the oil, we need to warn them politely, and then take action if they don't respond," read an opinion piece published last fall in the Global Times. "We shouldn't waste the opportunity to launch some tiny-scale battles that could deter provocateurs from going further."

Philippines: The government of President Benigno Aquino believes the Scarborough Shoal (known as Panatag Shoal in the Philippines and Huangyan Island in China) is an issue they can't back down on. Manila seems to have geography on its side – the reef is more than 800 kilometres southeast of Hong Kong, but just 220 kilometres west of the main Filipino island of Luzon – and the Filipino public squarely supports standing up to China. But easier said than done. The Philippines Navy is tiny, with a former U.S. Coast Guard cutter as its flagship (compared to the dozens of destroyers, frigates and submarines possessed by the Chinese navy). The country is also heavily reliant on Chinese trade and tourism. Manila's tough talk softened noticeably once Beijing began blocking imports of Filipino bananas and warning tourists to avoid the Philippines.

But as Gen. Xu said, the Philippines seems to feel that has Washington its back. Defense Secretary Voltaire Gazmin surprised many this month when he suggested that the Scarborough Shoal was covered by a mutual defence treaty signed by the U.S. and the Philippines in 1951, meaning American forces would intervene if shooting broke out. Though no U.S. official has publicly made the same assertion, The U.S. has hastened the delivery of another cutter to the Filipino navy, and the nuclear submarine USS North Carolina docked in the Philippines in the middle of the current crisis.

Vietnam: To some South China Sea watchers, the biggest surprise is that the Philippines, not Vietnam, is leading the confrontation with China right now. The navies of China and Vietnam are nose-to-nose in the disputed Spratly Islands (which each occupy part of, as do the Philippines, Malaysia and Taiwan), and warning shots are not uncommon. Nationalist sentiment is high in Vietnam. Prolonged anti-Chinese protests erupted in Hanoi and Ho Chi Minh City last year following a clash between Chinese and Vietnamese boats near the Spratlys. Like the Philippines, Vietnam has taken to hosting joint naval exercises with the United States (its old enemy), drills that China sees as a direct challenge to its claim. Unlike the Filipino navy, the Vietnamese People's Navy can put up a fight on its own, with seven frigates and six submarines among its fleet.

The United States: China says it started seeing a new swagger from Manila and Hanoi after Secretary of State Hilary Clinton's assertion two years ago that freedom of navigation in the South China Sea was a U.S. "national interest." But the United States doesn't want escalation. "I don't think the U.S. has any interest in any kind of tension or any kind of conflict in the South China Sea," said Stephanie Kleine-Ahlbrandt, head of the Beijing office of the International Crisis Group, which recently published a report on the growing tensions. "These countries literally begged the U.S. to get more involved."

Association of Southeast Asian Nations: ASEAN, as the regional body is known, is an umbrella group that five South China Sea claimants – Vietnam, the Philippines, Malaysia, Indonesia and Brunei – are members of. Hanoi and Manila have repeatedly proposed settling the disputes en masse via a negotiation between China and ASEAN, or via international courts. Beijing, however, rejects what it calls "internationalization" of the South China Sea issue. "China is a big country and the other countries are small countries, and that's just a fact," Chinese Foreign Minister Yang Jiechi told the 2010 ASEAN summit in Hanoi.

South China Sea by the numbers

The percentage of the globe's oil tanker traffic passing through the South China Sea, the shortest route between the Pacific and Indian Oceans.

The value of ship-borne trade which traverses the sea lane.

The high-end estimate of the number of barrels of oil in the area surrounding the Spratly and Paracel Islands.

The estimated reserves of natural gas resources, in cubic feet, in the shoals.

The amount of the global fisheries catch provided by the waterway – from sea cucumbers and squid to snapper and shark. 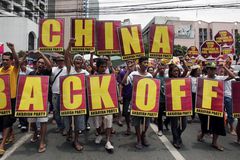 Dangerous nationalism on the South China Sea
May 8, 2018 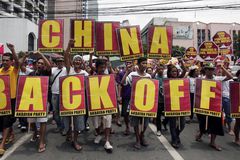 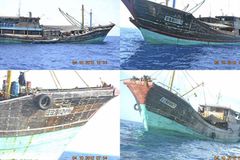 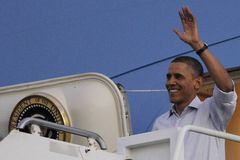