A strongman, a boxer and a soft-spoken candidate campaigning on behalf of a jailed former prime minister: Ukraine's parliamentary elections Sunday are seen as a decisive point in the future direction of a country that only won independence from Russia 21 years ago and since then has seen years of economic and political turmoil.

But many locals are bemoaning their lack of choice.

"What will change? You have crooks on one side, crooks on the other side," said Oleg Archipenko, 46, who owns a small clothing store on the outskirts of Kiev. "Of course we must vote – it is our right to vote and we must do it. But the choice is not great."

Nervous Ukrainians were lining up at banks and currency exchange stalls all week to buy dollars and euros out of concern that their local currency, the hryvnia, will fall after the vote.

President Viktor Yanukovych's Party of Regions is expected to outperform his rivals, including those in the Fatherland Party of jailed former prime minster Yulia Tymoshenko and heavyweight boxing champion Vitali Klitschko's Ukrainian Democratic Alliance for Reform. In the eight years since the Orange Revolution brought down Mr. Yanukovych, a narrow electoral win in 2010 over Ms. Tymoshenko has allowed him to regain and firm up his tight hold on the country.

"This is a pivotal moment for Ukraine because the oligarch government of Mr. Yanukovych has brought us to a crossroads at which [Ukrainians] must choose between becoming a normal democracy or a dictatorship," said Pavlo Khazan, a Green Party candidate in east-central Ukraine. "I fully believe that when we look back, we will understand that 2012 was the point [where our future] path was chosen."

Fronting the ruling party's campaign is Prime Minister Mykola Azarov, a Soviet-style leader who rarely mingles with crowds and prefers to give speeches and Facebook updates. His main message is how the party has restored stability and economic growth to the nation after the chaotic rule of the warring Orange team of former leader Viktor Yushchenko and Ms. Tymoshenko.

Since the 2004 Orange Revolution, which was sparked by allegations of large-scale electoral fraud, the country has continued to struggle with corruption, crippling debt and a wobbly currency while billionaire oligarchs continue to rake in profits.

Mild-mannered Arseniy Yatsenyuk, standing in for the jailed Ms. Tymoshenko as the lead for the opposition Fatherland Party, hopes his party will build on its current 98 seats in parliament by joining forces with seven minor parties.

But some say that the party has channelled all its energy into Ms. Tymoshenko's release, neglecting to put forward convincing plans to turn the country around and betting on sympathy for a politician many distrust.

"[Ms. Tymoshenko] is more popular in the West than in Ukraine," Wojciech Kononczuk, an analyst at Warsaw-based Centre for Eastern Studies said. "She is [seen as] one of the most untrustworthy politicians in Ukraine – in the eyes of simple Ukrainian voters, she's perceived as a part of the system."

In 2011, Ms. Tymoshenko was convicted of criminal abuse of office for concluding a natural-gas deal with Russia disadvantageous to Ukraine and sentenced to seven years in prison. It was a conviction widely seen as political retribution and one that knocked her out of the race for this year's parliamentary election.

Meanwhile, Mr. Klitschko's party has been rising in the polls, drawing large and enthusiastic crowds in campaign stops across the nation.

"People are angry," Mr. Klitschko told the Kyiv Post newspaper between campaign stops earlier this month. "This unites people all over the country – their attitude to the ruling party, which has failed in all their promises."

But as a newcomer to politics, analysts say the sportsman looks unequipped to deal with the tough challenges that any new government will have to tackle.

A survey published shortly before an Oct. 18 poll blackout showed Mr. Yanukovych's ruling party leading with 23.3-per-cent support. Even so, it indicated that the Ukrainian public has little faith in either of the major parliamentary factions.

"There is a rising dissatisfaction in Ukraine toward politicians and politics," said Mr. Kononczuk. "The Orange Revolution was a moment when simple Ukrainians believed that they could truly change the country. [Now they] are more disappointed than ever by the situation [here]."

Analysts say the opposition is expected to prevent Mr. Yanukovych's forces from amassing a two-thirds majority of 300 seats that would allow the president to change the constitution. Some fear that given such powers, he would try to cancel presidential elections scheduled for 2015 and revert to a system in which parliament elects the top leader.

Andriy Magera, the deputy head of the Central Election Commission in Ukraine, has already called this campaign the dirtiest of the four elections he's been involved in.

"What is really striking is the scale of bribes of voters in the election," Mr. Magera told the Kyiv Post.

With a report from freelancer Eric J. Lyman 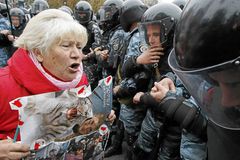