With emotional appeals and promises of action, India's prime minister urged thousands of Indian-Americans at New York's Madison Square Garden Sunday to help him develop the nation's economy, vowing that under his leadership, India won't look back.

A day after addressing a hushed U.N. General Assembly, where headphone-wearing delegates rarely break into a smile, Narendra Modi received a tumultuous welcome from upward of 18,000 people. He announced plans to simplify the immigration bureaucracy for Indians living abroad, and called on them to "join hands to serve our mother India."

Modi drew on the mix of high aspirations and homespun style that served him well on the campaign trail when he won a convincing election victory in May.

A dazzling, Bollywood-style show warmed up the crowd before Modi appeared. About 30 U.S. lawmakers attended — ringing the stage as the Indian leader came into the auditorium under a spotlight like a boxing champion. The event had the feel of a political rally, and the audience periodically broke out into chants of "Modi! Modi!"

On Monday, Modi will meet with President Barack Obama at the White House, a meeting that both sides hope can improve strained relations between the world's two largest democracies.

Being courted by Washington marks a major change since 2005, when the U.S. denied Modi a visa for his alleged complicity in sectarian violence in his home state of Gujarat.

Inside, Modi spoke in Hindi from a dias at the centre of the stage that occasionally rotated so he could face a different section of the audience. He vowed to fight corruption and champion India's legions of poor.

He also touted India's promise as a tech giant, joking that it's no longer known as a nation of "snake charmers."

"Our country used to play with a snake, now we play with the mouse," Modi said, drawing laughs and applause.

Modi is no stranger to a big stage. Backed by huge corporate wealth, he was the centre of the slickest election campaign India has seen. Madison Square Garden, however, takes it up a notch. It is home to the New York Knicks basketball team, and was where John Lennon played his last concert. Muhammad Ali fought his first bout against Joe Frazier there.

About 800 people also gathered to watch a live feed of the speech in New York's Times Square, some holding Indian flags and sporting Modi t-shirts.

At both venues, Indian-Americans likened the enthusiasm over Modi's meteoric rise to that surrounding Obama, who captured America's imagination when he won the 2008 presidential election vowing to bring "change."

"We haven't seen a leader like Obama in our country 'til we've seen Modi," said Raj Thondepu, 33, from Jersey City, New Jersey.

But the Indian leader, a Hindu nationalist, hasn't entirely shed questions about his past.

A federal court in New York on Friday issued a summons for Modi for a lawsuit brought by a U.S. human rights group. It was filed on behalf of victims of the Gujarat violence that claimed more than 1,000 lives, mostly Muslims.

The group offered a $10,000 reward for anyone who is able to serve the summons on Modi, even though as a head of state he enjoys immunity from lawsuits in American courts while in the U.S.

The protesters outside the venue said the Indian leader failed to stop the anti-Muslim rioting as chief minister of Gujarat in 2002. Signs read "Modi, the fascist" and "Stop spreading hate in the name of Hinduism."

Khalid Ansari, a computer expert who works in Raleigh, North Carolina, came to New York to join the protest. Pointing to the Garden, Ansari said of Modi, "He's being honoured in there today, but before he was prime minister, he was banned from entering the United States on human rights grounds."

Although Modi remains a divisive figure, the event at Madison Square Garden, is a sign of his appeal not just at home but also the growing clout of the 2.8 million Indian-Americans. It's one of the wealthiest diaspora communities in the U.S., and can help Modi spur trade and foreign investment. More than 30,000 people across the U.S. sought the free tickets for the New York event, according to the organizer, the Indian-American Community Foundation.

The foundation says more than 400 partner organizations helped spread the word and distribute tickets for the event, with financial support by Indian American people and businesses. They billed it as one of the largest receptions ever held for a foreign leader in the U.S. 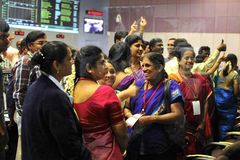 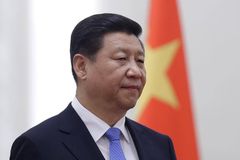 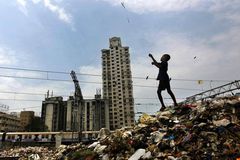 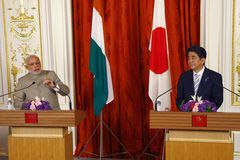 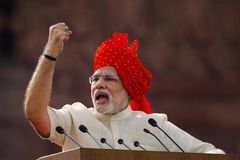