It began in mid-July: First came a series of retaliatory killings between ethnic communities in the state of Assam in mid-July. Soon nearly 500,000 people had fled their homes for grim refugee camps. The central government belatedly sent in troops to assist, although that has barely quieted matters. But in the meantime, the violence in remote Assam triggered a bizarre series of knock-on events that has affected the entire country.

First a Mumbai demonstration in support of Muslims in Assam turned violent, leaving two people dead. Then tens of thousands of people from the northeast who lived and worked in big cities in the south of India packed up and fled back home – terrorized by Facebook, Twitter and text messages threatening them with violence in "retaliation" for what was happening in the north. The Indian government accused Pakistani agents of producing the threatening material to destabilize India. Then India went on a web crackdown, ostensibly trying to shut off the social media causing the panic – but setting off a fierce debate about censorship in the process.

Violence in the northeast

The seven states in the Indian northeast are connected to the rest of the country by only a tiny strip of land and often seem to exist in a whole other country. Several states have ongoing ethnic conflicts, and are covered by a law giving the Indian armed forces central powers, sharply criticized by human rights organizations. But the rest of the country knows little and, it often seems, cares less about these disputes.

So it was, initially, with the violence in Assam: in mid-July, killings began in the west of the state that has seen historic conflict between people in the Bodo ethnic group, which makes up about 35 per cent of the state population, and Bengali-speaking Muslims who migrated to the region, in some cases generations ago, from farther south – they are about 29 per cent of people in the state. The fight, said Sanjoy Hazarika, who directs the Centre for North East Studies at Jamia Millia University in Delhi, is over access to resources, and land. Simply put, the Bodo, who hold political power in the state, won't share the resources they receive from New Delhi, which angers other groups, while the Bodo, who fear their status as the dominant group is ebbing, are desperate to hold on to power. Over the course of two weeks, some 79 people were killed, often gruesomely; at least 14,000 homes were burnt and people from both sides of the fight fled to refugee camps in one of the largest movements of people in the region since partition in 1947.

Mr. Hazarika noted that the dispute had existed as warm embers to a long-running demand for a separate Bodo state: "When governments don't get at the core of issues and when [they] leave things half-baked and unresolved these things fester." Some 190,000 people were still living in camps left over from riots in the 1990s, he said. "Governments come and go and are incapable of sending people home in safety."

Right-wing Hindu organizations in the country including the Bharatiya Janata Party (BJP), the official opposition, blamed the trouble on illegal immigrants from Bangladesh. Mr. Hazarika rejected the idea. "Of course there are Bangladeshis coming in but nothing on the scale they are propagating – it's a mantra to divert attention from the real core issues of natural resources, political power and just economic distribution of central funds." Because the central government has failed to respond except by sending troops, he added, there is real danger these sporadic clashes could become a wider armed conflict.

Repercussions in the south

The first sign that this episode of violence in the northeast was going to have an impact outside the region came when a demonstration in Mumbai on Aug. 11, organized in support of Muslim victims of alleged atrocities, became violent. Two people were killed and at least 14 were seriously injured. Some protesters said they had been shown images taken from the Internet of Muslim victims in the northeast, which inflamed the crowd.

Days later, the exodus began: thousands of people of northeastern origin who had migrated for work to the more prosperous big cities of the south, such as Bangalore and Pune, suddenly began to flood into train stations, desperate to flee. They said they had received text messages warning them to go or face violent reprisal for what had been done to Muslims in Assam. But it wasn't just Assamese who were fleeing: people from Manipur and the other five states went too, because Indians from the rest of the country rarely distinguish between the northeast states and they all felt afraid.

In vain, the Prime Minister and other major political figures pleaded with them to stay put and stay in their jobs. Nitin Pai, an expert on social media with a think tank called the Takshashila Institution, said it was the first time India saw what it means to be what he calls a "radically networked" country – more than three-quarters of Indians have cellphones and can receive text messages. Far fewer have Internet access – but one person who sees a Facebook page or Twitter post can quickly text 50 others, he noted. "When people are connected in such a fashion it's very easy to mobilize them quickly, and mobilization is much faster than counter-mobilization. In Bangalore, by the time people in authority came to know there was a rumour and people were packing their bags, they were too late – by then 5,000 people were at the train station." The government response needed to go up a hierarchy and across ministries – and meanwhile the text messages were flying.

It was also, said Mr. Pai, indicative of how little faith people had in government's ability to protect them, and, Mr. Hazarika said, illustrated the deep distrust people from the northeast have for the central government

As the government began to dig in to the cause of the panic, the story became increasingly bizarre. Almost none of the images that were ostensibly outraging Muslims in the rest of India, and potentially spurring them to acts of vicious revenge, were actually of Assam. The much-circulated Facebook images were Photoshopped (often badly) pictures of atrocities allegedly carried out against Muslims in Burma several years ago or entirely unrelated pictures (such as those of Buddhist monks helping earthquake victims in Tibet) purporting to be from Assam. But the media consumers in question were not sophisticated, Mr. Pai noted, and the irrationality was lost in the mass panic.

On Aug. 19, Indian Home Minister Sushil Kumar Shinde said that government intelligence agencies had determined that the posts were originating in Pakistan, and that he had asked his Pakistani counterparts to track down and stop those responsible. Pakistan denied responsibility. Relations between the two countries, which had been thawing perceptibly, suddenly became chilly once more.

To try to stanch the exodus to the northeast, the Indian government first banned the sending of bulk text messages and then began to try to block Internet sites that hosted offensive material. But this undertaking fast became fraught: for the past three years the Indian government has battled in court with big Internet companies, such as Facebook and Google, and its own citizens over efforts at censorship. The government has been engaged in a prolonged skirmish with the companies to try to force them to screen and remove "objectionable" material.

But up until now, that material has been satirical Twitter handles and Facebook groups that mock senior members of government or the ruling Indian National Congress. "Now for a change, the government has legitimate grounds to censor speech," said Sunil Abraham, director of the Centre for Internet and Society in Bangalore, "but they've cried wolf on so many occasions before."

Nevertheless, the companies concerned have engaged the government on the issue, acknowledged that the material in question is causing harm and disrupting public order, and appear to be co-operating in its removal. The government has listed 310 items – Twitter feeds, Facebook pages, URLs – for blocking. But, Mr. Abraham noted, instead of doing that directly with the firms, it is using the much slower and more erratic approach of relying on Internet Service Providers or ISPs to do it.

Mr. Abraham said he fears what may come next: that government will see this incident as reason – or use it as a pretext – to attempt to get an even tighter hold over the Internet. "Then we're headed for big trouble." 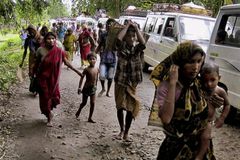