We could hear the voice of the funeral orator two blocks away: "Dear martyrs, we will not forget you," he said in a booming voice, amplified further by loudspeakers. "Already we have launched four rockets in the direction of Ashdod," he declared. Then, turning to his finest fiery tone he almost screamed: "And we will soon send more right to Tel Aviv and Haifa," – all in order to defeat the "Zionist enemy," Israel.

We hadn't known just what to expect when we headed to Khan Younis Saturday morning. I, for one, wanted to know just why this conservative, largely religious community in the south of the Gaza strip appears to have had more of its people killed than any other city or town during this 12-day-old conflict.

True, it was the home of the late Sheik Ahmed Yassin, the first leader of Hamas, and of his successor Abdel Aziz Rantisi. But it's no longer so closely associated with the Hamas leadership.

As we arrived, we came upon the funeral of nine men, all in their 20s or early 30s, killed about 2 a.m. Saturday morning by a single missile apparently fired by an Israeli drone. The deaths helped put the total number of Gazans killed in this war well above 300.

The oration was pretty standard fare for Hamas or Islamic Jihad funerals. But what surprised us as we turned into the courtyard of Nasser Hospital where the event was taking place was that this was a funeral mainly conducted by Fatah, the party led by Palestine President Mahmoud Abbas. Mr. Abbas, known popularly as Abu Mazen, opposes the rockets being fired against Israel and is trying to de-escalate this conflict not intensify it.

But it was definitely the yellow flag of Fatah that flew above the crowd of 300 or so – flying upside down, by the way, whether by design or accident, I couldn't find out.

And it was the flag of Palestine that was bloodied and wrapped as a shroud around the bodies of seven of the nine men – the other two were wrapped in the green flag of Hamas.

Watching the corpses of the men being hurriedly carried by on the shoulders of ardent young men, Abu Ibrahim, a 45-year old engineer and life-long Fatah supporter, explained that "what Abu Mazen is doing is wrong. He should stop all security cooperation with Israel, and stand behind his people."

Hamas, Abu Ibrahim said, was "obliged to fight this war with Israel."

"It is resisting the Israeli attacks on behalf of all the people of Gaza," he said.

War is a bonding experience, it seems, and this band of Palestinian brothers has become increasingly united, whatever their past differences.

While Khan Younis might be called the original home of Hamas, it also has been a centre of the Fatah movement in Gaza. In the 2006 Palestinian election, the people of this city elected three Hamas representatives and two from Fatah, one of whom was Mohammed Dahlan, who led the party in Gaza and denounced Hamas's election as a disaster. He even attempted to overthrow Hamas in 2007, but lost in the street battles between the two sides and left the Strip in Hamas's control.

Yet, despite the bloody history between the two movements, today they stand allied.

A senior Fatah official told me earlier this week in Ramallah that Fatah has felt obliged to fire some rockets against Israel, lest it be seen as collaborating with the Jewish state.

Most of the victims lived on the same street in the Khan Younis refugee camp. It's a secular neighbourhood of three and four-story cinder-block buildings that lacks any of the trappings of a religious, pro-Hamas area.

The seven Fatah and two Hamas supporters were felled in that street as they sat and talked Friday night and into Saturday morning. It was hot that night and there was no electricity to run fans or air conditioners, so they, among others, stayed outside where it was cool.

Without warning, the missile hit, said Mustafa Ridda, father of one of the victims, and grandfather of three others.

The device left a hole in the road about three centimeters in diameter. As we arrived at the scene, children were clustered around the hole, trying to put their small feet into it. The significance of the moment was lost on most of them but they ran around giddy with excitement – something had happened to give meaning to their sleepy street.

Judging by the pattern of wounds that cut the men down and by the holes left in the steel shutters behind them, the device was likely using a kind of weapon, the casing of which breaks into tiny metallic shrapnel that is sprayed upon explosive impact.

Such weapons are very lethal at close range only and are used in warfare when you want to avoid collateral damage to innocent bystanders – a noble sentiment. 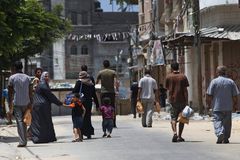 Rocket diplomacy: Both Israel and Hamas are in this for the long haul
July 18, 2014 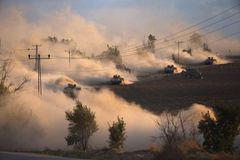 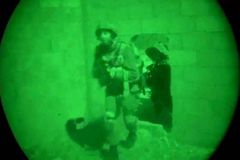 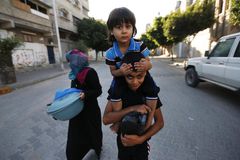 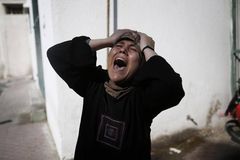 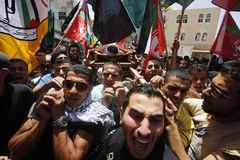