More than 2,000 fishermen have been rescued this year from brutal conditions at sea, liberated as a result of an Associated Press investigation into seafood brought to the U.S. from a slave island in eastern Indonesia.

Dozens of Burmese men in the bustling port town of Ambon were the latest to go home, some more than a decade after being trafficked onto Thai trawlers. Grabbing one another's hands, the men walked together toward buses last week. As they pulled away for the airport, some of those still waiting their turn to go home cheered, throwing their arms in the air.

"I'm sure my parents think I'm dead," said Tin Lin Tun, 25, who lost contact with his family after a broker lured him to Thailand five years ago. Instead of working in construction, as promised, he was sold onto a fishing boat and taken to Indonesia. "I'm their only son. They're going to cry so hard when they see me."

The reunion he envisions has played out hundreds of times since March, after the AP tracked fish — caught by men who were savagely beaten and caged — to the supply chains of some of America's biggest food sellers, such as Wal-Mart, Sysco and Kroger, and popular brands of canned pet food like Fancy Feast, Meow Mix and Iams. It can turn up as calamari at fine restaurants, as imitation crab in a sushi roll or as packages of frozen snapper relabeled with store brands that land on our dinner tables. The U.S. companies have all said they strongly condemn labour abuse and are taking steps to prevent it.

In response, a multimillion-dollar Thai-Indonesian fishing business has been shut down, at least nine people have been arrested and two fishing cargo vessels have been seized. In the U.S., importers have demanded change, three class-action lawsuits are underway, new laws have been introduced and the Obama administration is pushing exporters to clean up their labour practices. The AP's work was entered into the congressional record for a hearing, and is scheduled to be brought up for discussion again later this month.

The largest impact, by far, has been the rescue of some of the most desperate and isolated people in the world. More than 2,000 men from Myanmar, Thailand, Cambodia and Laos have been identified or repatriated since the AP's initial story ran, according to the International Organization for Migration and foreign ministries. The tally includes eight fishermen trafficked aboard a Thai cargo ship seized in neighbouring Papua New Guinea.

And those returnee figures don't tell the whole story: Hundreds more have been quietly sent home by their companies, avoiding human trafficking allegations.

"We've never seen a rescue on this scale before," said Lisa Rende Taylor, an anti-trafficking expert formerly with the United Nations who now heads the anti-slavery non-profit Project Issara. "They deserve compensation and justice."

Many experts believe the most effective pressure for change can come from consumers, whose hunger for cheap seafood is helping fuel the massive labour abuses. Southeast Asia's fishing industry is dominated by Thailand, which earns $7 billion annually in exports. The business relies on tens of thousands of poor migrant labourers, mainly from neighbouring Southeast Asian countries. They often are tricked, sold or kidnapped and put onto boats that are commonly sent to distant foreign waters to poach fish.

A year-long investigation led the AP to the island village of Benjina, part of Indonesia's Maluku chain about 400 miles north of Australia. There, workers considered runaway risks were padlocked behind the rusty bars of a cage.

Men in Benjina — both those stuck on Thai fishing boats and others who had escaped into the jungle — were the first to go home when rescues led by the Indonesian government began in early April. Since then, hundreds more have been identified and repatriated from neighbouring islands. Many of those leaving recently from Ambon were handed cash payments by company officials, but they said the money was a fraction of what they were owed.

"My colleague, Chit Oo, fell from the boat into the water," wrote Ye Aung, 32, of Myanmar. "The captain said there was no need to search, he will float by himself later."

Another man, 18-year-old Than Min Oo, said he was not paid and wrote simply: "Please help me."

For many, the return home is bittersweet. Parents collapse in tears upon seeing their sons, and some men meet siblings born after they left. But almost all come back empty-handed, struggle to find jobs and feel they are yet another burden to their extremely poor families. At least one crowd-sourcing site, set up by Anti-Slavery International, is aimed at helping them.

A study by the London School of Hygiene and Tropical Medicine earlier this year, based on interviews with over 1,000 trafficking survivors from different industries, found half of those returning from slavery at sea suffered from depression and around 40 per cent from post-traumatic stress disorder or anxiety. Those men were not connected to the Benjina cases.

Many bear physical scars as well.

Tun Lin, who returned to Myanmar last week, held up his right hand: a stump with just a thumb.

He said one finger was ripped off while he tried to wrangle an unwieldy net on the deck of his boat, and the other three were crushed beyond saving. He was taken by refrigerated cargo delivery ship to Thailand, where the remaining digits were surgically removed. Four days later, he said, he was put back on a ship bound for Indonesia, where he fished for the next three years.

"There were some good captains, but there were a lot of bad ones," the 33-year-old said, his eyes filling with tears as he described how "boat leaders" were assigned to act as enforcers, beating up fishermen who weren't working fast enough. "When we asked for our money, they'd say they didn't have it ... but then they'd go to nightclubs, brothels and bars, drinking expensive alcohol."

Like many of the men rescued from Ambon, Tun Lin had been working for PT Mabiru Industries, where operations were halted several months ago as authorities investigated trafficking and illegal fishing in the industry there. Mabiru, one of more than a dozen fishing, processing and cold storage firms in Ambon, sold packages of yellowfin tuna largely headed for Japanese markets, and also shipped to the United States. The company is shuttered and its managers could not be reached.

Florida-based South Pacific Specialties, which distributes to supermarket chains, restaurants and food groups, received a shipping container loaded with frozen tuna from Mabiru in February. Managing partner Francisco Pinto told the AP his company had once rented out Mabiru's facilities in Ambon, bought tuna from private artisanal fishermen, and hired its own workers for filleting and processing fish. Pinto said he has spent the past six weeks in Indonesia meeting and observing fish suppliers because American customers are increasingly demanding fair treatment for workers.

Amid the increased scrutiny, some have taken legal action. In the past month, three separate class-action lawsuits have been filed naming Mars Inc., IAMS Co., Proctor & Gamble, Nestle USA Inc., Nestle Purina Petcare Co. and Costco, accusing them of having seafood supply chains tainted with slave labour. Ashley Klann, a spokeswoman for the Seattle-based law firm behind several of the cases, said the litigation "came as a result of AP's reporting."

Even with the increased global attention, hundreds of thousands of men still are forced to work in the seafood industry.

"Slavery in Southeast Asia's fishing industry is a real-life horror story," said Congressman Chris Smith, R-N.J., who is among those sponsoring new legislation. "It's no longer acceptable for companies to deny responsibility ... not when people are kept in cages, not when people are made to work like animals for decades to pad some company's bottom line." 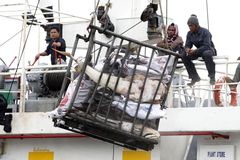 Hundreds of fishermen rescued from slavery in Indonesia
April 3, 2015 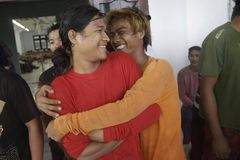 Bangladeshi migrants find safety in Indonesia, but now face the burden of failure
May 22, 2015 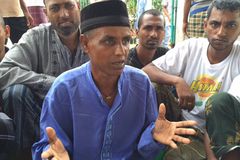