It has taken seven years but Iranian-American relations are now closer, more constructive, and hold more promise for bilateral co-operation and furthering peace in the Middle East than at any time since the Shah, a ruthless pro-Western dictator installed with the help of the CIA in 1953, fled Tehran as a broad and popular Islamic revolution put Ayatollah Ruhollah Khomeini in power in 1979.

Saturday's prisoner swap – including the release of Washington Post correspondent Jason Rezaian and three other Americans in exchange for seven Iranians held in U.S. prisons – capped a frenetic few months of near-constant talks between the Obama administration and the relatively moderate Iranian government led by President Hassan Rouhani.

It all culminated in a hectic 100 hours. On Thursday, Iran swiftly freed 10 U.S. sailors aboard two heavily-armed naval patrol boats which had – perhaps inadvertently – encroached into Iranian territorial waters. It was the sort of crisis averted that would have been unimaginable even a year ago before U.S. State Secretary John Kerry and his Iranian counterpart Foreign Minister Mohammad Javad Zarif forged a working relationship that culminated in a breakthrough nuclear limitation pact.

That pact also passed a crucial moment Saturday – so-called implementation day – with the United Nations announcing Tehran had met its obligations in curbing nuclear enrichment and sealing a plutonium reactor with the result that onerous economic sanctions will be lifted and frozen Iranian assets worth tens of billions of dollars will be freed.

"It's a good day for the people of Iran... and also a good day for the region," Mr. Zarif said even before the prisoner swap become public, adding the nuclear pact and better relations generally between Iran and the nation it once routinely referred to as the Great Satan had removed "the shadow of a baseless confrontation."

Removed, not yet, but the bitter adversarial Iranian-American standoff that endured since 1979 has been largely replaced by a dynamic and improving relationship which may yet emerge as an one of President Barack's Obama's enduring foreign policy achievements.

In place of decades of hostility "we seek instead engagement that is honest and grounded in mutual respect," Mr. Obama said in a videotaped message to Iranians only weeks after he reached the White House in 2009. "We seek the promise of a new beginning."

Seven years later, the new beginning is well under way.

It goes far beyond prisoner swaps, the nuclear limitation pact, the lifting of some sanctions and the capacity to cope quickly with a messy military incursion.

While all those are vital; they reflect relations already improved. More importantly, they lay the basis for a more complex relationship extending beyond the bilateral.

Iran is a key player in the Middle East. It is the region's most powerful Islamic country. It is the leading Shi'ite power. Along with Turkey, it is the prominent, non-Arab, Muslim nation in the region.

U.S. and Iranian military forces are already engaged in parallel – not joint – combat operations against Sunni radicals, including Islamic State, in both Iraq and Syria.

While Washington and Tehran remain at odds – sometimes severely so – over Iran's support for Hezbollah in Lebanon and other groups regarded as terrorists by the U.S. government, closer Iranian-American relations hold the prospect for a fundamental reshaping of the balance of power in the region.

For decades, U.S. dependence on Saudi oil made the Saudi royal family an indispensable ally for successive American administrations.

And the Saudi royal family, guardians of the holiest Muslim sites, champions of Sunni Islam and owners of the world's biggest oil reservoir, was vital to U.S. interests.

No longer. The U.S. will soon be self-reliant in oil and natural gas and both are playing a diminishing role in energy independence. Saudi support for Islamic State and other fundamentalist Sunni groups – not official perhaps but from powerful Saudis – irks the U.S. and bedevils the official relationship.

Meanwhile Saudi Arabia and Iran are adversaries. It goes beyond their respective roles as the competing Sunni and Shia powers, beyond Persian versus Arab. They are already at war, albeit limited and mostly involving proxies, in Syria and in Yemen.

Improved Iranian-American relations doesn't necessarily mean worsening Saudi-American relations but the emergence of multiple common objectives shared by Washington and Tehran gives both U.S. and Iranian presidents new levers to use as they seek to influence outcomes in the Middle East.

The bright hopes that the Arab Spring might deliver democracy across the region have dimmed. Authoritarian regimes control major Arab states including Egypt and Saudi Arabia. Syria has spiralled into a civil war so violent that more than half the population have been driven from their homes and hundreds of thousands have been killed.

Any political solution in Syria will require both Iranian and American involvement and, likely, post-conflict co-operation. Iran remains Syrian President Bashar al-Assad's key regional ally and the only provider of ground troops that keep his ruthless regime from collapsing.

Closer Iranian-American relations won't guarantee sweeping change in the region. But without them, peace remains a remote, illusive hope. 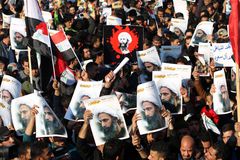 Opinion
Regional reality: There are worse alternatives than the House of Saud
May 16, 2018