Trucks and jeeps packed with Yazidi refugees trundled slowly across the pontoon bridge, with children poking their dusty heads out of the windows and truck beds. Nearby, a distraught father frantically scanned them as they passed, hoping to catch sight of his missing son. Beside him, a young man searched for his sister, who he fears was snatched by extremists.

Unknown numbers, perhaps hundreds, of men, women and children went missing in the chaos as tens of thousands of Iraqis from the Yazidi religious minority fled in a panic from marauding militants, then spent a week hidden in the barren Sinjar mountains before finally making their way into neighbouring Syria and then back into the relative safety of Iraq's autonomous Kurdish region.

Some of the missing may have been gunned down by militants while fleeing to Mount Sinjar. Others were lost as families scattered in panic under gunfire from extremists chasing them into the mountains. Dizzy from thirst, some adults lost track of children in the crowds in the mountains. Some women may have been abducted by militants, and Iraqi and U.S. officials say they believe hundreds of women are being held captive by the radical Islamic State group.

In the past three days, thousands of Yazidis stranded on the mountain have been able to escape with help from Kurdish security forces and others, a UN official said on Monday.

Most who escaped had been trapped on the north side, said Kieran Dwyer, spokesman for the UN Office for the Co-ordination of Humanitarian Affairs. They then had a seven-hour walk, at times travelling in vehicles, through Syria before crossing back into the safety of Iraq's Kurdistan region.

Many Yazidis remain trapped on Mount Sinjar, however, especially "on the south side … where they are mostly exposed to the armed groups," Mr. Dwyer said.

He said air drops of aid were critical to keeping them alive until an escape route can be secured. The UN mission in Iraq has said it is preparing a humanitarian corridor to allow Yazidis to flee.

"One single corridor is not necessarily the way that it's happening," Mr. Dwyer said. "When people get off the mountain they still have to get through some very difficult territory before they get into a safe zone."

'My father is a broken man'

At the Semalka crossing between Syria and Iraq, crowds of Yazidis made their way into the relative safety of Iraqi Kurdistan on Sunday and Monday. Trucks, jeeps and cars full of Yazidis inched across a pontoon bridge over the Tigris River, which forms the border here. Hundreds of other refugees milled among them on foot, some barefoot, lips cracked from thirst, clutching water bottles, watermelons and flat loaves of bread distributed by aid workers.

Some men walked into the Tigris River to cool off; mothers bathed their children. One woman walked weeping; a boy held her hand. Most said they had not eaten in days.

And many searched for their missing relatives among the crowds. There was no way of knowing how many were missing with the situation still in flux.

"My sister is missing," 22-year-old Amer Qassem said as he walked among the crowds.

Mr. Qassem said he and dozens of his extended family fled their village of Tel Qassab the night of Aug. 2 when they heard fighters from the Islamic State group were approaching. The militants consider Yazidis heretics. As the sun rose, militants riding a jeep mounted with a machine gun spotted them and opened fire.

"We ran everywhere, we were terrified. We lost each other," Mr. Qassem said. The jeep zoomed away. As the extended family regrouped, they realized some women – maybe 10 – were missing.

"My sister Amira was one of them," he said. "My father is a broken man now; he does not know what to do if something will happen to her."

Like others fleeing Yazidi-majority villages in the area, Mr. Qassem's family scrambled up the nearby Sinjar mountains, a 60-kilometre range that the Yazidis consider a holy site. There they remained for days, until Kurdish Syrian fighters battled the militants to clear a path for the Yazidis to escape into nearby Syria. Once there, they walked or hitched rides further north to Semalka to cross into Iraq's Kurdish-controlled areas.

The UN refugee agency said 31,000 Iraqis, most from Mount Sinjar, had crossed from Syria into Kurdistan in recent days.

'Can you find my children?'

The confusion of fleeing under fire was so great that Hanash Hamo can't even say for sure who was last holding his three-year-old daughter, Jalila. Now the girl has vanished, along with two of his other children, Suad and Azad, he said, showing their identification cards.

Another man, Hussein Haji, said he had lost contact with over 25 relatives in the village of Solakh. He showed pictures of them on his phone – baby Sam, dressed in pink swaddling clothes, missing alongside his mother; Nashwan, a teenage boy; and Alina, a smiling girl, also missing along with her mother.

"Can you find my children?" asked another elderly man, Hashem Saleh, when he saw a crowd gather around a reporter. His daughters, 12 and 15 years old, and two sons, 24 and 14, were gone, lost as the crowds descended from the mountain through a desert valley toward the Syrian border.

"Who can help me find them?" Mr. Saleh pleaded, his white, baggy pants, shirt and droopy mustache caked brown with dirt.

Others tried to reassure him that his children probably hitched rides and were probably already in a camp for the displaced in northern Iraq. But he insisted he would not leave the border crossing until he found them. By evening, he was nowhere to be seen; there was no way of knowing if he found his family.

U.S. military cargo planes delivered 88 bundles of food and water in a fourth air drop to the Yazidi civilians trapped on Mount Sinjar.

The U.S. has delivered more than 74,000 ready-to-eat meals and more than 56,000 litres of fresh drinking water since the humanitarian air drops began on Thursday, the Pentagon said.

The meals are designed to be able to survive being air-dropped, without a parachute. The so-called Humanitarian Daily Ration (HDR) is a self-contained Halal meal designed to feed a single person for a full day.

The U.S. is also deploying a disaster response team to Iraq to help distribute humanitarian aid, the U.S. Agency for International Development announced Monday. The team will help speed food, water and other life-saving supplies to refugees. It will also help co-ordinate the assistance of distribution among Iraqi officials, international partners and humanitarian aid agencies.

Two British supply drops on Mount Sinjar were aborted at the last minute for fear the packages could hit crowds below, the government said on Monday.

"So many people were coming toward the plane that unfortunately we weren't able to carry out that aid drop because we were concerned that we could have put lives at risk," a spokeswoman said.

The new federal funds will be used to distribute food, hygiene kits, tents and other supplies, as well as repair water and sanitation facilities. 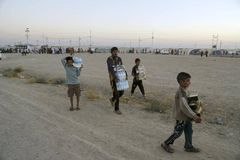