When the black-clad militants of the Islamic State of Iraq and the Levant (ISIL) first arrived in Mosul, many among the city's majority Sunni population celebrated. The jihadis had a rough look about them – they were heavily armed and many wore masks – but they were hailed for driving out the Shiite-dominated Iraqi army, which many in Mosul had come to revile as almost an occupying force.

Part of the reason the extremists were welcomed was that they captured Mosul – Iraq's second-largest city – as part of an informal coalition with Sunni tribal fighters, as well as remnants of Saddam Hussein's secularist Baath Party. As ISIL gains in strength and notoriety, it's a marriage of convenience the tribes and the Baathists may come to rue.

Stories abound in Khazir, a sweltering refugee camp 50 kilometres east of Mosul, alongside the highway to semi-independent Iraqi Kurdistan, about the cruelty of Prime Minister Nouri al-Maliki's regime, which many here say arrested and tortured Sunni youths seemingly at random. But the camp's 3,000 residents tell even worse tales about the ISIL fighters who came after them.

Anad Mahmoud, a 22-year-old electrician, says masked ISIL men dressed in long Pakistani-style robes came last week to the farming village of Guba, on the outskirts of Mosul. Though Mr. Mahmoud is a Sunni Arab, most of his neighbours were Shia Turkmen and Shabaks, another religious minority.

Mr. Mahmoud says the Shiite men captured by ISIL were made to dig a pit that would prove to be their mass grave. "They took about 80 Shiite people to a giant hole. They put jerry cans that were filled with something like kerosene in the pit with them, and then blew them up. I heard the sound."

New York-based Human Rights Watch has reported that at least 40 Shia Turkmen were kidnapped in Guba on June 23, and that some were believed to have been killed. The group said four Shia places of worship in and around Guba were also destroyed with dynamite by ISIL.

Mr. Mahmoud, who now shares a tent with five Mosul refugees in Khazir, says he narrowly avoided death himself. "First they said 'You are a Shiite and we are going to execute you.' Then when they discovered [from his identification] that I am Sunni, they said 'You are living in a Shia area, so we will treat you the way we treat them. You must be killed.'"

In the end, Mr. Mahmoud and the other Sunni residents of Guba were allowed to go, but their homes and belongings were taken by ISIL.

Many in Khazir – a sand-whipped place with few services and a mixed population of Sunnis and Shiites who fled Mosul over the past three weeks – say they now believe Iraq is fracturing and the sectarian violence can only be halted by creating separate Sunni, Shia and Kurdish states. But the tales they tell of ISIL raise worries about what kind of entity an Iraqi Sunni state might be.

"In this camp, you can find Sunnis and Shiites living side-by-side. It is only ISIL who are extremists," said Ali Ahmed, a 20-year-old Shia student sharing a tent with his mother and four siblings. "You can't find a single Shiite in Mosul now. … They kill people at the checkpoints after looking at their identification documents."

The most recent arrivals to Khazir camp say Mosul is now being governed under a harsh form of sharia law. Some tell tales of being criticized over their Western-style haircuts, and of women being allowed outside only in the company of male relatives. There are rumours of makeshift Islamic courts in the city.

On Sunday, ISIL declared it had established a caliphate stretching from Diyala Province, east of Baghdad, to Aleppo in Syria. In an audio recording released online, the group said its leader Abu Bakr al-Baghdadi was now "the caliph" of this region and the "leader for Muslims everywhere."

Those living in Khazir also say the rebels have struggled to deliver basic services such as water and electricity to Mosul, and that the city has been strafed in recent days by Iraqi army helicopters. Aid agencies say that more than 500,000 people have fled Mosul and surrounding Nineveh province since the fighting began.

The head of Iraq's largest Sunni tribe, Sheik Ali Hatem al-Suleimani, said in an interview that while tribal fighters currently shared common cause with ISIL, there was no formal alliance and tribal leaders knew that if and when they succeeded in ousting Mr. al-Maliki, they would eventually have to fight ISIL next.

The 43-year-old sheik, who heads the powerful Dulaimi tribe, said there were vast differences between the aims and tactics of the tribes – whose fighters include many Saddam Hussein-era police officers and soldiers – and those of ISIL. "We don't think we can work with ISIL and be allies. Culturally, we are totally different from them," the sheik said in a meeting Saturday with The Globe and Mail and other foreign media at a five-star hotel in the Kurdish capital of Erbil.

Sheik al-Suleimani said he wanted "democracy" and greater rights for Sunnis within Iraq – through a new constitution that would see Iraq made into a federal state, with Sunni, Shia and Kurdish regions that would have wide autonomy – and he would not support an ISIL theocracy, nor the Baath Party's return to power. "We are postponing our fight with ISIL until later," he said. "Now is not the time to fight ISIL, it's the time to fight Maliki."

The former Baathists – now known as the Naqshabandi Army and headed by top Saddam lieutenant Izzat Ibrahim al-Douri – appear to be the weakest partner among the anti-Maliki forces. When Baathists began displaying portraits of Mr. Hussein around Mosul after the Iraqi army's retreat, ISIL ordered the Baathists to remove them within 24 hours.

Sheik al-Suleimani said that while "Mosul is a special situation," the role of ISIL in the Sunni offensive has been exaggerated by Mr. al-Maliki's government and the international media. He said ISIL "terrorists" made up just 7 to 10 per cent of the total number of Sunni fighters, although he acknowledged the number of ISIL followers was growing.

He said the tribes were confident they could handle ISIL after Mr. al-Maliki was gone. The Dulaims played a key role in the so-called "Sunni Awakening," which saw the Sunni tribes – who had originally fought against the U.S. occupation of Iraq – drive out al-Qaeda in Iraq after the tribal leaders deemed it a threat to their interests. "We have already done this [battled a group like ISIL] before. Al-Qaeda in Iraq was much stronger than ISIL, and we defeated them in 2008."

But in Khazir camp, those who have seen ISIL up close suggested the extremists are gaining strength and that the temporary entente is backfiring on the secular sheiks and the Baathists.

"How can they fight ISIL if they control most of Mosul?" asked Mr. Mahmoud, the electrician who says his Shia neighbours were massacred. "Many young people are now joining ISIL. These people are from his tribe." 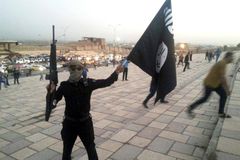 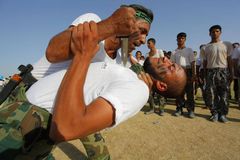 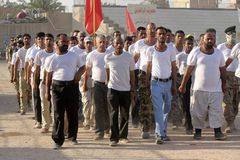