Egyptians appeared headed for a Muslim Brother as president after two days of voting in a runoff election that ended Sunday. But the country's military leaders look to have the last laugh, as they are to issue a constitutional decree Monday that is expected to sharply limit the powers of the new president.

Mohamed Morsi, leader of the Muslim Brotherhood's Freedom and Justice Party and the movement's backup choice to contest the presidency, was emerging as the choice of the relatively small number of Egyptians who cast ballots on the weekend. Mr. Morsi, an uncharismatic, U.S.-educated engineer, seemed to be finishing well ahead of Ahmed Shafiq, a former commander of Egypt's air force and the last prime minister of the regime of deposed president Hosni Mubarak.

Official results are to be announced Thursday.

"If it happens that they announce [Mr. Shafiq] is the winner, then there is forgery," said Brotherhood spokesman Murad Mohammed Ali. "We will return to the streets." Although, he added: "we don't believe in violence."

Less than 40 per cent of eligible voters cast ballots in the runoff round of voting, down from the 46 per cent who voted in the first round last month.

What many Egyptians found to be the unpalatable choice between an Islamist candidate who might take the country in the direction of an Islamic state, and a former Mubarak official who threatened to turn back the clock to an old-style military regime, was undoubtedly responsible for much of the decline in voting. A majority of voters in the first round had cast ballots for more moderate choices from among 13 candidates. But voters were stuck with the two leading candidates, one from each extreme.

The elevation of a leader from a once-banned religious-political movement to the highest civilian post in the land will come as a shock to many, if not most, Egyptians. But the jarring news will likely be tempered by the decree to be issued Monday by the Supreme Council of the Armed Forces (SCAF) that had assumed executive powers in the wake of the ouster of Mr. Mubarak in February, 2011.

The decree reportedly withholds from the president, at least until a new constitution is written and approved, power over the public budget and over the issuing of public policy for the state. The decree does, however, acknowledge the president's power to appoint a prime minister and cabinet and to promulgate laws or object to them.

The budgetary and public policy controls will remain the purview of the military leadership until a new constitution makes clear where those powers should permanently lie.

On Thursday, the country's Supreme Constitutional Court ruled that the means by which one third of the members of the People's Assembly were elected were illegal and that the results should be considered void. The SCAF then decreed that the entire parliament was dismissed.

In its decree Monday, the military leadership states that the legislative powers of that parliament now revert to the SCAF, giving the military complete authority to make the laws, as was the case before the newly-elected parliament was sworn in earlier this year.

As well, the SCAF remains fully in charge of everything army-related.

In addition, the military leadership reportedly affirms its right to appoint a constitutional assembly to draft a new constitution that will be put to the people for approval in a referendum. And it retains for itself veto power over any provision of the constitution – thus ensuring the new charter would guarantee them a say in key policies such as defence and national security, as well as shield their vast economic empire from civilian scrutiny.

The decree, really an appendix to the limited constitutional decree issued last March in the wake of Mr. Mubarak's ouster, also states that the election of a new parliament will take place only after a new constitution is written and approved.

Egypt's military leadership, chaired by Field Marshal Hussein Tantawi, had promised to hand over power to a civilian leadership by the end of June.

The SCAF's restrictions on presidential and legislative powers are perhaps the only way the military leadership could countenance having a Muslim Brother as president.

For six decades the all-powerful military has waged an on-again-off-again war against the Brotherhood and its various extremist splinter groups. To the generals, who trace their command lineage to the Officers' Coup of 1952 that overthrew the Egyptian monarchy, it would be unthinkable to take orders from their former adversary. Their withholding powers at least put them in a position from which to set the terms for a permanent division of authority.

The Freedom and Justice Party dominated the recently elected assembly and has rejected the SCAF's authority to dismiss the entire parliament and to take legislative power unto itself.

It described last week's order to dissolve parliament as a "coup against the entire democratic process." It also rejected the military's right to declare an interim constitution and vowed that an assembly created by parliament last week before its dissolution will write the new charter, not one picked by the generals.

The party members plan to march to the parliament building Tuesday and claim their place in the assembly.

Last Wednesday night, before the controversial court ruling was released, military forces and armoured vehicles took up positions around the parliament, apparently in anticipation of trouble. At the same time, martial-law authority was decreed by SCAF to arrest people without charge for the slightest violation. 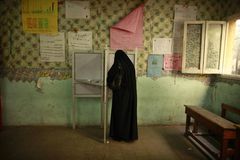 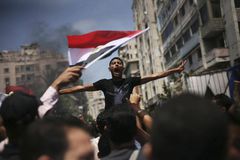 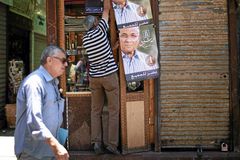 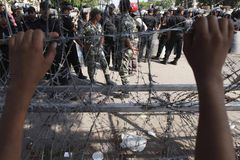