A first attempt to end the military conflict between Israel and Hamas ended in failure Tuesday after Hamas's military wing rejected a proposed Egyptian truce. While Israel accepted the terms of the truce and stopped all hostilities against Hamas and other militant groups in Gaza Tuesday morning, Hamas and the others continued fire.

"Our battle with the enemy continues and will increase in ferocity and intensity," said the leaders of the al-Qassam Brigades, as Hamas's military wing is known. The statement was issued and a salvo of rockets was launched even as Hamas's deputy political chief, Moussa Abu Marzouk, said in Cairo that Hamas had not yet decided on the proposed truce. The mixed signals suggest divisions in the Islamist movement that could complicate efforts by Israel and others to bring the conflict to an end.

By mid-afternoon Tuesday, more than 45 rockets had landed in urban centres in south and central Israel, at which point Israeli forces were ordered to return fire.

Not long after the rocket fire resumed, Israel had its first fatality from the conflict. A 37-year-old construction manager was killed when a rocket exploded at the Erez crossing to Gaza. He was delivering candy to soldiers on duty.

"Hamas will pay the price for its decision to continue this campaign," said Israeli Prime Minister Benjamin Netanyahu, explaining in a television address why he had ordered the Israel Defence Forces (IDF) to resume the fight.

"It would have been preferable to solve this diplomatically," he said, "but Hamas has left us no choice but to expand the operation against it. … When there is no ceasefire, our answer is fire."

The absence of a ceasefire has left Israel trying to find the right combination of cost and benefit to bring Hamas back to the table for another try at agreeing to a truce.

"That means a lot more punishment directed at Hamas's military wing," said Mark Heller, principal research associate at Israel's Institute for National Security Studies, referring to what is likely to be a particularly intensive aerial campaign at Hamas military facilities.

"It's either that or an intensive ground campaign," he said, noting that Israel's "responsible political leadership" is reluctant to launch such a campaign and jeopardize the international sympathy it believes it enjoys.

As for what benefit Hamas can hope to achieve, Mr. Heller said they "need something to show their people that will allow them to declare a victory."

Most likely, he said, that will be the reopening of the Rafah crossing between Gaza and Egypt. The border was closed shortly after Egypt's Muslim Brotherhood authorities were ousted by Egypt's military leader, now President Abdel-Fattah el-Sissi.

Such a development would come with a price, Mr. Heller said. "Egypt will want to have the crossing guarded by [Palestinian president Mahmoud] Abbas's security forces, not Hamas."

Reasons given by Hamas for rejecting the truce varied throughout the day Tuesday. At one point, a Hamas spokesman in Gaza said the group was against the proposal because it had not been consulted ahead of time.

Former British prime minister Tony Blair, who is advising the Egyptian President on Middle East matters, denied that was the case. "This was not a failure to communicate," he said in an interview with BBC TV. Hamas's political leadership in Cairo was consulted at every step along the way, he said.

It is unclear who is calling the shots in Hamas these days: the military commanders in their bunkers in Gaza; the civilian leadership in Gaza; or the political leaders living in Cairo and Qatar?

"In these situations, it is usually the most hardline element and, in this case, it's those with a direct line to the rocket-launching teams who call the shots," said Anshel Pfeffer, writing in Israel's Haaretz newspaper Tuesday evening.

There are some in Israel who argued strongly this week that Hamas should be destroyed and the operation shouldn't stop until it achieves that. "Those are crazy right-wingers saying that as a political ploy," said Mr. Heller.

"We don't want to get rid of Hamas," he said. "We'd be left with chaos in Gaza and maybe the rise of Salafi jihadist groups. That would be much worse."

In his televised remarks, Mr. Netanyahu addressed the criticism from members of his cabinet earlier in the day when Foreign Minister Avigdor Lieberman denounced Israel's acceptance of the ceasefire and argued that Israel should conquer Gaza and expel Hamas from it.

"These are moments when decisions must be made coolly and with patience," Mr. Netanyahu said, "not hastily or noisily."

"At a time when Israel and the Israel Defence Forces are in the middle of a military campaign, it is unacceptable for the deputy minister of defence to attack the national leadership," Mr. Netanyahu said in announcing the dismissal. 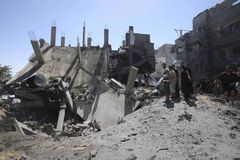 Public editor: Headlines are hard to write, but they must be precise
July 14, 2014
Israel warns Gaza of future air strikes
July 13, 2014 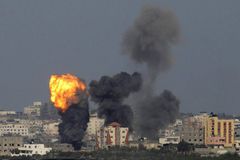 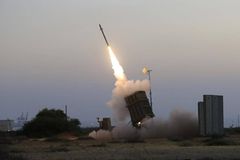 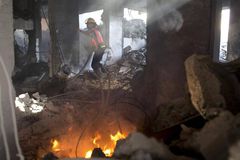