The crackdown comes after a deadly July 31 firebomb attack on a Palestinian home in the West Bank that killed an 18-month-old boy and his father and severely wounded his mother and brother.

Tensions have soared since that attack and on Sunday Israeli troops shot and killed a Palestinian who had stabbed an Israeli in the West Bank, wounding him lightly.

Authorities called the arson attack an act of "Jewish terrorism," and Israel's Security Cabinet approved the use of harsh measures to combat the trend, including administrative detention, which allows suspects to be held for lengthy periods without charge.

The measure has been mainly used against Palestinians suspected of involvement in militant groups, and rarely against Israelis.

Meir Ettinger, the grandson of the late U.S.-born ultranationalist Rabbi Meir Kahane, and Eviatar Slonim, another Jewish extremist, were placed under administrative detention Sunday for their suspected involvement in an extremist Jewish organization, the office of Israel's Defence Minister said.

The two, who are in their early 20s, were arrested last week. Another suspected Jewish extremist, Mordechai Meyer, was placed under six-month administrative detention last week.

Israeli human rights activists who advocate on behalf of Palestinians, as well as lawyers for the Israeli suspects, criticized the use of administrative detention.

"It is carried out based on an administrative order only, without indictment or trial, and the detainee cannot defend himself against the allegations as the evidence is classified," a statement by human rights group B'Tselem said.

"This measure is dangerous … for the entire legal system and for democracy," added Aharon Rozeh, a lawyer for Mr. Ettinger and Mr. Slonim, who said his clients were innocent.

Israel's Shin Bet security agency has accused Mr. Ettinger of leading an extremist Jewish movement that encouraged attacks on Palestinian property and Christian holy sites, including an arson attack on a well-known church near the Sea of Galilee in northern Israel that marks the New Testament story of the miracle of the loaves and fish.

Israeli authorities also carried out arrest raids Sunday in two West Bank settlement outposts. Israeli police spokeswoman Luba Samri would not say whether the arrests were linked to the arson attack. The arrests, carried out by a nationalist crime unit, were connected to "a number of events that occurred recently" in the West Bank, she said.

Authorities said one of the raided outposts was Adei Ad, close to the Palestinian village of Duma, where the arson attack took place. In January, Jewish settlers near Adei Ad threw stones at U.S. consular vehicles carrying visiting American officials.

Authorities would not name the other outpost raided, but Israeli media identified it as Baladim. Both outposts — small, isolated Jewish settlements built without government authorization — are located in an area known for its hard-line settler population.

Meanwhile, the father of the Palestinian detainee on hunger strike, Naser Allan, said his 30-year-old son is in serious condition after 56 days without food. He said Mohammed was arrested in November 2014 and placed in administrative detention for two six-month periods.

The father said his son, now a lawyer, previously had been imprisoned from 2006-2009 for alleged affiliation with the Palestinian militant group Islamic Jihad.

A contentious Israeli law passed last month permits the force-feeding of inmates on a life-threatening hunger strike. Mr. Allan's father said that Israeli authorities are threatening to force-feed his son, who has refused medicine or vitamins, only drinking water.

A spokeswoman for the Israeli hospital where he is being held, and Israel's prison services, did not return requests for comment.

Scores of Palestinian prisoners have used hunger strikes in recent years to highlight their detention without trial or charges.

Israel in the past has acceded to their demands and at times has released prisoners. In June, Israel released Khader Adnan, 36, a senior activist in Islamic Jihad, after he carried out a 55-day hunger strike to protest his detention.

Mr. Karake said the prisoners' demands included allowing the families of Gaza prisoners to visit, permitting access to satellite television stations, and ending the use of force and solitary confinement. 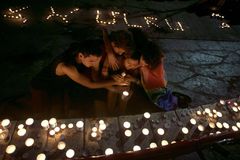 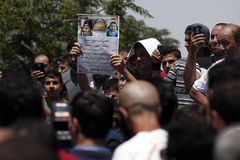