Israeli officials say they are increasingly concerned that advanced missiles and even chemical weapons are being transferred from Syria to forces of the Lebanese Shia militia movement, Hezbollah.

Israeli and U.S. officials have long warned about such a transfer should Syrian President Bashar al-Assad's grip on power falter. And, with the fallout from last weekend's massacre of civilians in the Syrian area of Houla, that grip may well have weakened.

This, officials said, is all the more reason to take seriously the warning issued Wednesday by Ali Larijani, Speaker of Iran's parliament. Should the United States or any other country intervene militarily in Syria, Mr. Larijani said, "ash rising from the flames would definitely envelop the Zionist regime [Israel]"

Syrians already have transferred Scud D surface-to-surface missiles to Hezbollah in the last few months, wrote military analyst Alex Fishman, quoting unnamed Defence Ministry sources in Friday's Yedioth Ahronoth newspaper. The missiles, which can carry a chemical warhead and have a range of 700 kilometres, are capable of hitting any target in Israel.

The Israel Defence Forces say there has been a "regular transfer" of weapons from Syria to Hezbollah that began before the uprising against the Assad government. Since the Assad regime's loss of total control, however, transfers have increased, the IDF says, and have included unmanned aerial vehicles (UAVs) or drones, as well as shore-to-ship missiles and, most recently, the Scud D.

"The more Assad loses his grip, the transfers will increase," an IDF officer said earlier this year. "We're troubled by the transfer of strategic components from Syria to Lebanon, and if that happens, it might be cause for a more active response."

"Based on information that we have, there are reasons to believe that there is a flow of arms both ways – from Lebanon into Syria and from Syria into Lebanon," confirmed Terje Roed-Larsen, a special United Nations envoy in Lebanon, earlier this month.

Until now, the weapons heading to Hezbollah are said to have included a large quantity of medium- and long-range rockets and advanced anti-aircraft weapons, as well as the latest generation of Iranian UAVs. The drone, known as the Ababil (meaning swallow), is small and particularly difficult to shoot down.

Chemical weapons, however, may soon be added to that list. Syria has a large, lethal stockpile of such materiel, including Sarin and VX agents.

Earlier this year, Foreign Policy magazine, citing three different U.S. officials, reported that the United States sent out a message to Iraq, Jordan, Lebanon and Saudi Arabia, warning them about chemical weapons crossing over their borders in the event of the collapse of the Assad regime.

"These weapons' presence in Syria undermines peace and security in the Middle East, and we have long called on the Syrian government to destroy its chemical-weapons arsenal and join the Chemical Weapons Convention," a U.S. State Department official told Foreign Policy.

From Israel's perspective, a transfer of chemical weapons, or even of missiles likely to be used to transport them, will be perceived as "a red line" that has been crossed.

One defence official was reported to have told Israeli journalists it would amount to a "declaration of war." Though Syria possesses large quantities of such weapons as a deterrent, it has behaved responsibly with them, the official said in February. Hezbollah, however, "is a terror organization and is far less predictable," he explained, "and it must not be allowed to toy with the idea of using non-conventional weapons." Despite bloodbath, prospects slim for direct action in Syria
May 30, 2012 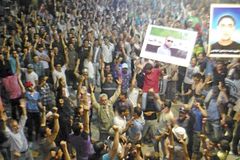