A senior Israeli minister has come to enlist the Canadian government in efforts to persuade the world to keep up pressure on Iran until it gives in – thoroughly – on its nuclear program.

Yuval Steinitz, Israel's Minister of Strategic Affairs, was briefed Friday by British and other officials now in nuclear talks with Iran. He flew to Canada for meetings Monday with Prime Minister Stephen Harper and Foreign Affairs Minister John Baird, and heads to Washington Tuesday.

Amid all the other Mideast issues, there's little doubt what tops Israel's agenda: pushing an uncompromising stance on nuclear talks with Iran.

"The greater the pressure, the greater the chances for diplomacy to succeed," Mr. Steinitz said in an interview with The Globe and Mail. "It would be unwise, to say the least, to ease the pressure on Iran before you get a final and satisfactory solution to the problem."

The election of centrist Iranian President Hasan Rouhani, who pledges to settle the nuclear issue, has led some to express hope for a deal with the United States and other Western countries that believe Tehran is seeking to develop nuclear weapons.

But Israel fears the enthusiasm will lead some countries to ease economic sanctions before the deal is done, or accept a lesser compromise than its own condition that Iran give up its capacity to enrich uranium completely.

"The Iranians are trying to save the Iranian economy and to save their nuclear project. They're trying to have them both, to save them both, and to manoeuvre in order to get this," Mr. Steinitz said. "And the world should tell them, enough is enough. … If you decide to proceed with your military nuclear project, you will destroy the Iranian economy, and maybe expose yourselves to military attack," he said. "And there is no third way. Nothing in between. No place to manoeuvre."

In Canada, he'll meet Mr. Harper, a staunch Israel supporter who shares a hard-line view on Iran. Mr. Steinitz wants the Prime Minister to use Canadian influence, even if Canada is not part of talks between Iran and the so-called P5+1 – the United States, Britain, France, Russia, China and Germany.

"Canada is very influential and can exercise its influence elsewhere – in Europe, in China, in America, in Russia, and elsewhere. It's very important. And I know that the Canadian government is already doing so."

That represents not just lobbying to maintain sanctions, but also setting a high bar for a deal. Israel wants Iran to give up its capacity to enrich uranium, so it could not make weapons fuel, and instead to import finished uranium for civilian use – the practice, Mr. Steinitz notes, of Canada and many countries.

Some analysts, however, argue that Israel's conditions are so high they would scupper any chance for a deal. They say that compromises Iran might accept – such as seeing it swap out its stockpile of enriched uranium, or limit enrichment activity – would be enough to hinder any effort to develop weapons.

But Israel argues it must go further.

The Israeli government's critics also note that Israel itself did not sign the nuclear Non-Proliferation Treaty, and it is an open secret it has nuclear weapons.

Mr. Steinitz said "it's true that we have a crystal clear policy of ambiguity," and that Israel has said it will consider the treaty when there is established peace in the Middle East. He argued Israel is a "democratic, reliable, trustable state" and it's "Iran that is threatening Israel's existence, and not vice versa."

With Iran, he said, the world must stop its military nuclear program, and only pressure will work. "This is the main working tool. Actually the only tool," he said. "Why give it up before satisfactory results?"

The theocracy has reason to negotiate
October 17, 2013 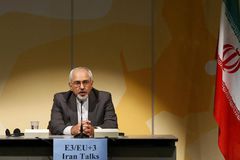 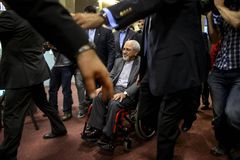