Israel may have won the battle to stop an international flotilla of protesters from reaching the Gaza Strip, but the killing of at least nine of those activists, and the international reaction that followed it, has meant Israel may well lose the diplomatic war.

About 15 Israeli commandos dropped from helicopters onto the deck of the Turkish-flagged ship Mavi Marmara about 4:30 a.m. Monday as the ship steamed from Cyprus, bound for Gaza. Activists on the boat alleged that the commandos fired directly on passengers, but Israeli officials say they used force only after being attacked with knives, clubs and even live fire.

Regardless of what happened on the deck of the ship, the longer-term consequences for Israel could be dire. The very blockade against Gaza that Israel sought to uphold could now be undone by its own heavy-handed action. And a national policy of relentlessly confronting Hamas, the Islamic rulers of the Gaza Strip, may lose its credibility. At the very least, Israel has become more isolated than at any time in recent history, an isolation that may undermine global efforts to bring its arch-foe, Iran, to heel over its nuclear ambitions.

The speed and intensity with which governments around the world condemned the Israeli behaviour appear unprecedented. The condemnation came from traditional enemies of the Jewish state, and from its closest friends. No matter that Israeli spokesman after spokesman argued that some of the activists were lying in wait to ambush the commandos, and attempted to lay the blame for the deadly violence at the feet of the flotilla organizers. "No one is buying it," said Ezzedine Choukri Fishere, a former Egyptian diplomat who spent several years in Israel.

The fallout from the episode "is going to be pretty bad for Israel," Mr. Fishere predicted. "It couldn't be much worse."

Israel got a taste of things to come as the United Nations Security Council went into an emergency session Monday afternoon and speaker after speaker blasted the Israelis over the incident. The raid will feed tensions with Israel's most critical ally, the United States, and complicate efforts by President Barack Obama to kick-start the languishing peace process with the Palestinians.

More telling still was the visceral reaction from Turkey, a long-time ally and critical bridge to the Muslim world. Turkey's Foreign Minister Ahmet Davutoglu called it "an act of barbarism," bringing to mind the image of pirates on the Barbary Coast 200 years ago. Israel, he said, "has lost its legitimacy" as a member of the United Nations.

"We may see something very rare," said Michael Byers, Canadian Research Chair in global politics and international law at the University of British Columbia: "a Security Council resolution that condemns Israel and that the U.S. doesn't veto."

Unthinkable? Not any more. Just this past weekend the Obama administration voted with an international coalition of Arab and developing nations and against Israel over the issue of bringing Israel's nuclear program under international inspection.

In the current matter of Israel's boarding of the six ships bound for Gaza, the Security Council dealings could lead to an internationally mandated inquiry, and even to the lifting of the blockade on Gaza.

Indeed, the issue of the blockade has begun to create fissures in the international Quartet that has overseen the Israeli-Palestinian peace process for almost a decade.

Formed in 2002, the group that consists of the United States, Russia, the European Union and the United Nations has decreed that no one should deal with Hamas until it meets three conditions: the recognition of Israel's right to exist, a renunciation of violence, and a willingness to accept past agreements the Palestinians have accepted.

On Monday, however, Catherine Ashton, the EU's high representative for foreign affairs, called for "an immediate, sustained and unconditional opening of the crossing for the flow of humanitarian aid, commercial goods and persons to and from Gaza." With such an approach, dealing with Hamas may not be far off.

Indeed, Ismail Haniya, Hamas's prime minister in Gaza, called yesterday for the European Union to withdraw from the Quartet in response to Israel's behaviour.

And Russia's President, Dmitry Medvedev, another Quartet member, recently met in Damascus with Hamas leader Khaled Meshaal, much to the consternation of Israel.

Instead of consolidating its blockade, Israel has to watch the international community shine a spotlight on it.

Israel's argument for retaining the blockade is that it prevents Hamas from receiving weapons that it will use against Israel. To Israel's growing number of critics, that argument no longer holds water.

The blockade, they point out, punishes all the people of Gaza collectively and, by Israel's own admission, weapons still are finding their way to Gaza via tunnels or by being floated in containers at sea.

Critics say the blockade prevents Israel from exploring options for peace with the Hamas leadership. Just last week, on U.S. public television, Hamas leader Mr. Meshaal reiterated his offer that if Israel ends the occupation, Hamas will end its resistance.

"So when the occupation comes to an end, the resistance will end, as simple as that," Mr. Meshaal said. "If Israel would go to the 1967 border … that will be the end of the Palestinian resistance."

Israel should have ended the blockade years ago, said Shlomo Avineri, former director-general of the Foreign Affairs ministry.

"We're in the 21st century - sieges aren't acceptable these days," he said. "We have to cleanse ourselves of this stigma; it's a pity we didn't do so before."

Mr. Avineri said Israel should immediately establish an inquiry into Monday's events, before being told to do so by the international community.

Mr. Avineri is not alone in thinking the problem has become the rules of engagement under which Israel's defence forces operate.

"Every time we turn around, scores of civilians are being killed," said Mr. Fishere. "I know there are voices inside Israel that want to see an end to all that."

It's the occupation of Palestinian territories that has bred this behaviour, he said. "You can't run an occupation, it seems, without stooping to brutality."

"Rabin recognized this," Mr. Fishere said, referring to the late Israeli prime minister Yitzhak Rabin. "That's why he became keen to make a deal with the Palestinians following the first intifada."

"He saw what it did to his soldiers, to the IDF that he held in such esteem, even to Israel itself," Mr. Fishere recalled. "Soldiers were killing rock-throwing kids."

"If you want to restore integrity in the IDF," he said, "you have to end the occupation."

HOW THE RAID WENT DOWN

3 p.m.: After a two-day delay, the Freedom Flotilla, six ships with 700 pro-Palestinian activists and 10,000 tonnes of aid onboard, leaves Cyprus for the 400-kilometre voyage to Gaza, where it intends to break the four-year Israeli blockade.

9 p.m.: Three Israeli naval vessels leave the Israeli port of Haifa on a mission to intercept the flotilla.

11 p.m.: The Israeli task force intercepts the flotilla about 150 kilometres north of Gaza. It orders the ships to enter the Israeli port of Ashdod or return to their country of origin. "If you ignore this order and enter the blockaded area, the Israeli navy will be forced to take all the necessary measures in order to enforce this blockade," the message says, according to a recording later broadcast on Israeli radio.

The activists respond that they will continue toward Gaza.

As the Israeli ships circle, the flotilla issues a series of brief messages over the next few hours through a device that charts its progress on a website. "This is a HELP message," it says at 12:30 a.m. on Monday. "We have been contacted by the Israelis but are still fine, don't worry."

4:30 a.m.: Rappelling from a helicopter and clambering up the side from fast attack boats, commandos of the Israeli navy's elite Flotilla 13 storm the Mavi Marmara, a Turkish ferry serving as the flagship of the Gaza-bound flotilla, in international waters about 65 km north of Gaza City.

Turkish television footage shows commandos descending from a helicopter being attacked by passengers armed with what appear to be metal bars, sticks and, in one case, a table. Whether these are the first blows struck in the incident is disputed. Those on board say the Israelis fired on the Mavi Marmara before boarding. Israel says it opened fire after its commandos were attacked by activists wielding knives, clubs and pistols taken from its soldiers.

Monday afternoon: The navy brings the ships to ports in southern Israel. Immigration police had detained more than 80 activists by mid-evening and more arrests were expected, an official said.

Was seizing the flotilla legal?
June 1, 2010
Leaders call for investigation before condemnation of flotilla attack
May 31, 2010 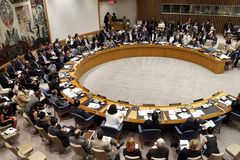 Canadian activist missing after ship raided by Israel
May 31, 2010
Raid drives rift between close allies
May 31, 2010 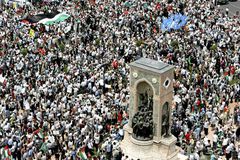 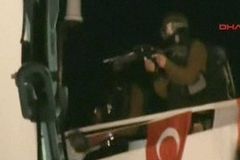 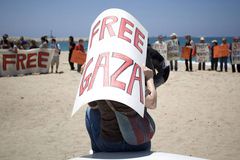 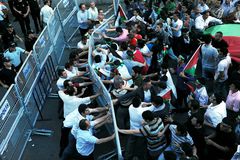