'It was horrific': How Zimbabwe's upheaval pushed this white farming family too far

Mark McKinnon and his family are staying with Mr. McKinnon’s aunt in Stouffville, Ont., after leaving Zimbabwe. Here, Mr. McKinnon is shown with his wife and sons Geoffrey, left, David, second from left, and Steven.

'I contributed a lot to Zimbabwe,' farmer Mark McKinnon says – but now his family has fled to Canada as their country has slid into political and economic disarray in recent months. Geoffrey York examines how their lives in Africa unravelled, and why

For 16 years, the McKinnons endured the worst of Zimbabwe's land invasions. On their farm near Harare, they survived kidnapping, torture, imprisonment, eviction attempts and criminal accusations.

It all came to an end when thugs dragged their furniture from their house and tossed it across the bush. After a week of hiding, they fled to Canada – the country from which their grandfather had emigrated, but a strange and unknown land to them.

The McKinnon family’s belongings were dragged from their home.

The McKinnons were among the last of Zimbabwe's dwindling band of white farmers. Of the 4,500 when the invasions began, fewer than 300 remain today.

With the Canadian embassy's help, the family of seven quietly gathered their travel documents this month and slipped out to Harare airport. They had switched off their cellphones and lived clandestinely for their final days in Zimbabwe, terrified the police could arrest them.

"That was the most scared I've ever been," 41-year-old Mark McKinnon said.

"I didn't breathe until the airplane was taxiing out. We all broke down when we flew over the Zambezi River. We knew it was the last time. And then we knew we were safe. We all had a good cry."

Land reform has always been a crucial issue in Zimbabwe. Half of its arable land was controlled by a tiny number of whites in 1980 when the country won its independence from a white-minority regime. The ruling party of President Robert Mugabe unleashed waves of invaders to seize white-owned farmland, beginning in 2000. But it used the land seizures to reward its political supporters, gave no compensation to the farmers and allowed the farms to fall into ruin when the invaders were unable to run them productively.

Much of the seized farmland has been left idle and a quarter of Zimbabwe's population has become dependent on food aid. Zimbabwe, once a food exporter, has become an importer.

This year, in a brief effort at placating its foreign creditors, Mr. Mugabe's government announced it is giving $42.7-million (U.S.) in compensation to a few dozen of the evicted white farmers. But some farmers say there is no sign of the money reaching those who lost their land.

Zimbabwe has slid into disarray in recent months, with the economy in tatters, the government running out of money to pay its civil servants, street protests growing and an unofficial power struggle by potential successors to the 92-year-old Mr. Mugabe, who seems in frail health.

People flee tear gas during clashes between police and street vendors in central Harare on Sept. 27, 2016.

As the crisis escalates, the pressure on the remaining white farmers is intensifying. The land invasions have increased, often targeting those such as the McKinnons whose farms are close enough to Harare to be subdivided into house plots that can be easily sold by well-connected insiders or corrupt officials.

"The desperation now is that Mugabe is on his way out, and there's a last-ditch scramble to grab something while they still have influence under him," Mr. McKinnon said.

His grandfather, Donald McKinnon, emigrated from British Columbia to take a mining job in South Africa in the 1950s, then purchased land in Zimbabwe and turned it into a farm by the mid-1960s. Donald's son and grandson retained Canadian-Zimbabwean dual citizenship, although Mark was born in Zimbabwe and had never set foot in Canada until he and his family fled to an aunt's home near Toronto earlier this month.

They had resisted the pressure of the land invaders for many years, perhaps protected by Zimbabweans who saw them as "good" farmers because they employed 250 permanent and seasonal workers, grew much-needed crops and donated food to a local school and orphanage.

But in one incident in 2012, Mark McKinnon was kidnapped and tortured for 24 hours by dozens of young men, believed to be the sons of high-ranking officials who wanted his farm.

"I was badly beaten, and they broke all my teeth," he said. "It was horrific. But farming is the only thing I know, so I stood up and fought for it." 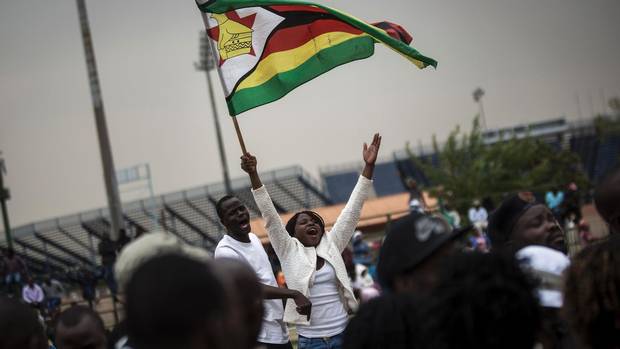 Geoffrey York explains why challenges are mounting against Mugabe

This year, the pressure grew worse. Local magistrates issued several eviction orders. He appealed to higher courts, obtaining an injunction against the orders. In July, invaders arrived and began drinking beer outside the house. His father picked up a gun and ordered them to leave. Police arrested him and his wife and jailed them for four days.

Meanwhile, a state-owned newspaper accused them of hiding an "arms cache" – ignoring the fact that their guns were licensed and Mr. McKinnon was a member of Zimbabwe's national clay-pigeon shooting team, often competing in international championships.

In late August, men broke into the house and tossed their furniture outside. Their belongings, including photos and papers, were strewn across the bush.

"I just said, 'No, it's enough now,'" Mr. McKinnon said. "I didn't want my children hurt like I was hurt. They would have locked us up on any trumped-up charges."

His 266-hectare farm is being subdivided into building plots of 300 square metres, which can be sold by politically connected officials for tens of thousands of dollars each.

Ben Freeth, a farmer and activist who was evicted from his Zimbabwean farm in 2009, estimates that government officials could earn as much as $66-million by selling plots on the McKinnon farm.

Mr. McKinnon said he feels "extremely sad and hurt" at the loss of his farm. "I contributed a lot to Zimbabwe," he said.

He and his wife and three children still dream of returning to the farm some day. "There isn't a day when I don't think of my farm."

The McKinnons were among the last of Zimbabwe’s dwindling band of white farmers.

GEOFFREY YORK IN AFRICA: MORE FROM THE GLOBE AND MAIL