When Amanda Knox was acquitted two years ago of murdering her roommate in Italy, she flew home to Seattle in triumph, hired a high-powered agent and signed a book deal reportedly worth $4-million (U.S.). Now on the eve of Ms. Knox's book launch, and an exclusive interview on U.S. television, an Italian court has ordered a re-trial in the case, adding yet another sensational twist to the saga.

Tuesday's ruling is certain to fuel the intrigue surrounding Ms. Knox, her racy history and the brutal killing of her British roommate Meredith Kercher in Perugia in 2007. The case has already generated a dozen books, including one by almost every player in the drama, as well as a movie and extensive media coverage around the world. Next month, U.S. broadcaster ABC is planning a one-hour prime-time special on Ms. Knox, including an interview by Diane Sawyer. On the same day, HarperCollins will publish Ms. Knox's book Waiting To Be Heard.

Ms. Knox, 25, could still go to jail. Her case has prompted fierce debate about whether she is a sex-mad she-devil known as "Foxy Knoxy" or a naive college student prosecuted by an incompetent Italian justice system. Her defenders see Tuesday's ruling as yet another example of a corrupt system out to get her. "The support will not waver," said a website dedicated to raising money for her defence. "The fight will go on." But others, including Italian prosecutors and Ms. Kercher's family, see the decision to re-try the case as vindication of long-held beliefs that Ms. Knox and her then-boyfriend, Raffaele Sollecito, got away with murder and crassly profited from it. "I'm glad someone is looking at it," Ms. Kercher's mother Arline told the Daily Telegraph.

For her part, Ms. Knox called the decision to hold another trial "painful." In a statement released by her publicist, she added that "the prosecution's theory of my involvement in Meredith's murder has been repeatedly revealed to be completely unfounded and unfair. I believe that any questions as to my innocence must be examined by an objective investigation and a capable prosecution. The prosecution responsible for the many discrepancies in their work must be made to answer for them, for Raffaele's sake, my sake, and most especially for the sake of Meredith's family."

It isn't clear when the new trial will be held or what it will focus on. Ms. Knox and Mr. Sollecito, an Italian, were convicted of murder in 2009 along with Rudy Guede, a drifter and small-time drug dealer from Africa. Ms. Knox had arrived in Perugia in September, 2007, to study at the local university. She met Ms. Kercher, an exchange student from Leeds, who agreed to share a cottage. Ms. Knox met Mr. Sollecito a few weeks later at a concert and the two began a relationship.

The circumstances of the murder were brutal. Ms. Kercher was stabbed 40 times and prosecutors claimed Ms. Knox and Mr. Sollecito helped Mr. Guede do the killing after a sex game went awry. Their trial was filled with tales of Ms. Knox's past and allegations of wild parties, orgies, drug use and promiscuity. One prosecutor called her "a diabolical demonic satanic she-devil." It didn't help Ms. Knox's cause that she gave a rambling confession, kept changing her story about the night of the crime and acted strangely during the trial. She also falsely accused another man of being involved in the murder, leading to a conviction for slander. They were all convicted and a judge sentenced Ms. Knox to 26 years in prison and gave Mr. Sollecito 25 years. Mr. Guede was tried separately and sentenced to 16 years.

Two years later, an appeal court acquitted Ms. Knox and Mr. Sollecito. The panel of five judges ruled that the prosecution had botched the case badly, noting that some of the DNA and other forensic evidence had been contaminated. There was no murder weapon, no decent witnesses and questions about just how a group of people who had only met a few weeks earlier could commit such a crime. Ms. Knox was released from jail and returned to Seattle, where she enrolled at the University of Washington and kept a low profile. She also hired a public-relations firm and Washington lawyer Robert Barnett to help land a lucrative book deal. Mr. Barnett's book clients have included President Barack Obama and former president Bill Clinton. Mr. Sollecito also returned to university in Italy and released a book about the case last fall. And the Kercher family published a book last year too.

The prosecution appealed the verdict once more and, on Tuesday, a higher court ordered a re-trial before an appeal court in Florence. The high court has yet to provide its reasons for the decision, meaning it remains unclear whether the entire case has to be re-tried or only certain aspects. Ms. Knox does not have to attend, but if the appeal court in Florence upholds the convictions, she could be extradited to Italy to serve a new sentence. HarperCollins said it plans to go ahead with the book launch next month and the round of television interviews. 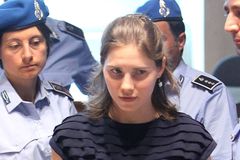