A power plant operator in southern Japan restarted a nuclear reactor on Tuesday, the first to begin operating under new safety requirements following the Fukushima disaster.

Kyushu Electric Power Co. said Tuesday it had restarted the No. 1 reactor at its Sendai nuclear plant as planned. The restart marks Japan's return to nuclear energy four-and-half-years after the 2011 meltdowns at the Fukushima Dai-ichi nuclear power plant in northeastern Japan following an earthquake and tsunami.

The national broadcaster NHK showed plant workers in the control room as they turned the reactor back on. Tomomitsu Sakata, a spokesman for Kyushu Electric Power, said the reactor was put back online without any problems.

The Fukushima disaster displaced more than 100,000 people due to radioactive contamination and spurred a national debate over this resource-scarce country's reliance on nuclear power.

A majority of Japanese oppose the return to nuclear energy. Dozens of protesters, including ex-Prime Minister Naoto Kan, who was in office at the time of the disaster and has become an outspoken critic of nuclear power, were gathered outside the plant as police stood guard.

"Accidents are unpredictable, that's why they happen. And certainly not all the necessary precautions for such accidents have been taken here," Kan shouted to the crowd of about 300 people.

The Nuclear Regulation Authority affirmed the safety of the Sendai reactor and another one at the plant last September under stricter safety rules imposed after the 2011 accident, the worst since the 1986 Chernobyl explosion.

The Sendai No. 1 reactor is scheduled to start generating power Friday and reach full capacity next month. The second Sendai reactor is due to restart in October.

Yoichi Miyazawa, Japan's industry minister, said Tuesday that the government would "put safety first" in resuming use of nuclear power.

All of Japan's 43 workable reactors were idled for the past two years pending safety checks. To offset the shortfall in power output, the country ramped up imports of oil and gas and fired up more thermal power plants, slowing progress toward reducing its emissions of greenhouse gases.

"It would be impossible to achieve all these three things simultaneously — keep nuclear plants offline, while also trying to curb carbon dioxide and maintain the same electricity cost. I hope to gain the public's understanding of the situation," Miyazawa said.

Prime Minister Shinzo Abe has sought to have the reactors restarted as soon as possible to help reduce costly reliance on imported oil and gas and alleviate the financial burden on utilities of maintaining the idled plants.

"There are very strong vested interests to reopen nuclear reactors. Accepting them as permanently closed would have financial implications that would be hard to manage," said Tomas Kaberger, chairman of the Japan Renewable Energy Foundation.

Utilities are seeking approvals to restart 23 reactors, including the other Sendai reactor.

The government has set a goal to have nuclear power meet more than 20 per cent of Japan's energy needs by 2030, despite the lingering troubles at the Fukushima plant, which is plagued by massive flows of contaminated water leaking from its reactors.

Removal of the melted fuel at the plant — the most challenging part of the 30-to-40-year process of shutting it down permanently — will begin only in 2022.

Still, the government favours restarting other plants judged to meet the new safety criteria, for both economic and political reasons. Japan invested heavily in its nuclear power program and many communities rely on tax revenues and jobs associated with the plants.

Japan also faces pressure to use its stockpile of more than 40 tons of weapons-grade plutonium, enough to make 40 to 50 nuclear weapons. The plutonium, as fuel called MOX, will be burned in reactors since the country's nuclear fuel recycling program at Rokkasho in northern Japan has been stalled by technical problems.

To burn enough plutonium, Japan needs to restart as many as 18 reactors. Nuclear experts say this could pose a challenge.

The cryptic words that guided pilots on the Hiroshima bombing mission
May 15, 2018 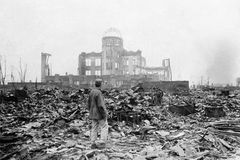