A major Japanese corporation will offer a landmark apology this weekend for using U.S. prisoners of war for forced labour during the Second World War, according to the Simon Wiesenthal Center, which is hosting the event.

A senior executive of Mitsubishi Materials Corp. will apologize to 94-year-old James Murphy, of Santa Maria, Calif., and relatives of other former POWs who toiled at plants its predecessor company operated in Japan during the conflict.

Rabbi Abraham Cooper, associate dean at the centre – an organization that primarily educates about the Holocaust – called it an important gesture, coming as it does ahead of the 70th anniversary in August of the end of the war that has heightened scrutiny of Japan's attitude to its past abuses.

"As far as I know, this is a piece of history," said Mr. Cooper, who is helping moderate the closed-door meeting Sunday at the centre's Museum of Tolerance in Los Angeles. "It's the first time a major Japanese company has ever made such a gesture. We hope this will spur other companies to join in and do the same."

A press release from the Wiesenthal Center said the apology will be made by Hikaru Kimura, senior executive officer for Mitsubishi Materials Corp.

Masato Otaka, spokesman for the Japanese embassy in Washington, said to the extent of his knowledge, it was an initiative of Mitsubishi Materials. He said the Japanese government has no involvement.

Japan's government issued a formal apology to American POWs in 2009 and again in 2010, but until now, the dwindling ranks of veterans have gained little traction in their demand that Japanese corporations that used them as slaves at mines and industrial plants under often brutal conditions do the same.

Some 12,000 American prisoners were shipped to Japan and forced to work at more than 50 sites to support imperial Japan's war effort, and about 10 per cent died, according to Kinue Tokudome, director of the U.S.-Japan Dialogue on POWs, who has spearheaded the lobbying effort for companies to apologize.

As part of its successful attempt to win UNESCO World Heritage status for 23 historical Japanese industrial sites, the Japanese government recently acknowledged that tens of thousands of South Koreans, Chinese and Second World War POWs were conscripted to fill labour shortages at factories, mines and other sites during the war.

Mr. Tokudome said Mitsubishi Materials will be apologizing for its use of forced labour by some 900 American troops at four locations operated by its predecessor company, Mitsubishi Mining Co. Only two living survivors of that ordeal could be located to accept the apology, and of them, only Mr. Murphy is fit enough to make the trip to Los Angeles.

Speaking by phone from Santa Maria, Mr. Murphy recounted how he was shipped to Japan as a POW two-and-a-half years following his capture in the Philippines, where he had been serving as a radio operator for the U.S. Army Air Corps. He had survived the notorious Bataan Death March, on which thousands of Americans and Filipinos are believed to have perished as they were made to trudge more than 100 kilometres to prison camps after their defeat by Japanese forces.

Mr. Murphy spent one year at a copper mine near Hanawa with about 500 other POWs.

"It was slavery in every way: no food, no medicine, no clothing, no sanitation," Mr. Murphy said, adding that it was all the more painful knowing that Mitsubishi built fighter aircraft used against American forces.

He said he forgave his captors after the war, but has hoped for an apology for 70 years. 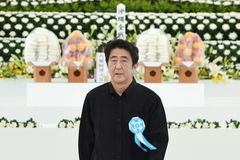 Japan’s ruling coalition agrees on bills to boost the military’s international role
May 11, 2015 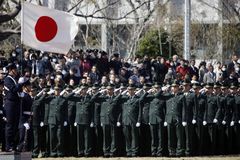