If there is such a thing as Bush family fatigue among American voters, Jeb Bush is about to test it. On Monday, he officially launches his presidential campaign. He is the third Bush family politician to reach for the White House.

Together, the three share a hunger for the family business – politics. But there are differences when it comes to personality, politics, governing and their place in the family.

When Jeb Bush and George W. Bush are compared side by side, they appear to be a study in opposites. One is diplomatic, introverted and cerebral. The other can be caustic, extroverted and emotional.

"I think in terms of temperament, Jeb is more like his father and George is more like his mother," said Steven Schier, professor of political science at Carleton College in Minnesota and author of High Risk and Big Ambition: The Presidency of George W. Bush.

"Barbara Bush doesn't suffer fools gladly and that element of her temperament, sort of a personal aggressiveness, is more evident in George W.," he said.

Jeb's personality is calmer and stable like the father's – keen to listen carefully and lacking the cowboy swagger his brother projected, according to Prof. Schier.

But Barbara A. Perry, co-chair of the Miller Center's Presidential Oral History Program at the University of Virginia, has a different take. In Jeb Bush, especially in recent media interviews when he initially backed his brother's 2003 Iraq invasion decision, she sees a more "sharp-tongued" politician coming through.

"When he's called to task on that, he seems to be very sharp and edgy and almost upset about it and doesn't handle the questions that come back to him with grace," she said. Sharp and caustic do not play well when running for president, she added.

For the two Bush sons, it would have been a formidable challenge to match the achievements of the father.

The elder Bush held the "perfect presidential resume," according to Prof. Perry.

He was a war hero who survived his plane being shot down in the Pacific, captain of the Yale baseball team, independent Texas oil businessman, U.S. congressman, head of the CIA, U.S. liaison to China, United Nations ambassador and U.S. vice-president for eight years next to Ronald Reagan.

"This is the irony of George W. Bush – he certainly didn't have the resume of his dad and it was almost counter to his dad," said Prof. Perry.

When given the same opportunities as his father, the eldest son struggled at top schools and avoided having to serve in the Vietnam War by joining the Texas Air National Guard, she added.

Jeb charted a different course, whizzing through university in 2 1/2 years with top honours, marrying his Mexican sweetheart at 21 and avoiding the turbulent, alcohol-fuelled 20s that his brother enjoyed – which so worried their parents.

"It was long thought that Jeb would be the leading presidential candidate out of that group of siblings," said Prof. Schier.

There is an activist streak in the Bush brothers when it comes to governing. They were keen to get big things done. But they approached governing in different ways.

George W. Bush, as Texas governor and president, relied more heavily on a coterie of advisers to shape policy, whereas Jeb Bush, as Florida governor, was more hands-on, crafting policy and often calling bureaucrats and taking them to task, explained Matthew Corrigan, professor of political science at University of North Florida and author of Conservative Hurricane, which looks at the Jeb Bush governor years.

If the younger Bush were to win the White House, his governing style would need to change.

"You can't micromanage the federal bureaucracy, I don't think. He might try, so that may be a challenge for him," said Prof. Corrigan.

The difference between the sons and the father is stark.

Prof. Schier describes the elder Bush's governing style as "in-basket presidency" and "to deal with whatever comes up" while George W. Bush saw himself as "the decider."

"And Jeb has to figure out where he is on that continuum because those are two very different temperamental approaches to executive office," he said.

Shortly before officially launching his presidential campaign, Jeb Bush told a Fox News reporter that his father was wrong to call Ronald Reagan's vision of low taxes on income and capital gains as "voodoo economics" during the 1980 Republican leadership race.

That vision would eventually become a cornerstone of Republican tax policy.

Criticizing dad may or may not be a big deal – the elder Bush wrote a letter to his sons in 1998 and encouraged them to disagree with him in public. "Chart your own course, not just on the issues but on defining yourselves," he advised.

But there is a larger point in Jeb Bush's criticism of his father.

"Really, if you have followed Jeb Bush's career, he is a much more conservative alternative to his father," explained Prof. Corrigan. The two brothers are similar in their conservatism, he added.

George W. Bush made tax cuts and education reform a priority as Texas governor. In Florida, the younger brother was equally – if not more – ambitious.

"Whatever you want to say about Jeb Bush you can't say he didn't accomplish big things as Florida's governor – and a great majority of them were very conservative policy changes," said Prof. Corrigan.

Big tax cuts, restrictions on abortion, expanding the rights of gun owners, the introduction of "stand your ground" laws are just some examples – and the biggest change of all was the introduction of market forces in public education through charter schools, he added.

Those conservative credentials have not always been enough.

"The problem with all the Bushes for the conservative Republicans is there wasn't a consistency in their conservatism and that means more than just your stance on taxes," said Donald Critchlow, professor of political history at Arizona State University and expert in American conservatism.

The elder Bush broke his 1988 pledge not to raise taxes and George W. Bush ran up deficits, grew the national debt and promoted nation building abroad even though he campaigned against it, added Prof. Critchlow.

With another Bush candidate on the horizon, there is, once again, skepticism. "He doesn't really have a conservative message," said Prof. Critchlow.

Republican leadership contests can be gruelling, but even more so in 2015.

Jeb Bush will face at least ten opponents and does not have front-runner status.

His father and brother were seen as favourites going in the GOP primaries and managed to prevail early on in the contests, said Prof. Schier.

"The situation is very different for Jeb where he's just one of a bunch of candidates polling between 10 and 15 per cent," he said.

"In some ways it may be a legacy of being the third Bush in line," he added.

This time around, a Bush presidential candidate faces serious challengers – like Marco Rubio, a senator from Florida and a Jeb Bush protégé. "And that's something the Bushes haven't faced before," said Prof. Critchlow.

There are even bigger challenges – exhaustion with the Bush name.

"Can we revisit the Bush eras again in the 21st century and create a winning coalition? I think there's a lot of apprehension that that is impossible," said Prof. Schier.

Hints of Jeb Bush's ambition – and the pressure – to win the White House were evident more than two decades ago.

"I want to be able to look my father in the eye and say, 'I continued the legacy,'" Jeb Bush told a reporter in 1994, the year he campaigned to become Florida governor, two years after his father lost the White House.

Jeb narrowly lost that race. Four states to the west, his brother was victorious in Texas.

As the story goes, on inauguration day in Texas for George W. Bush, the elder Bushes did not want to appear to be too happy for their eldest son because they did not want Jeb to feel bad about losing a close race in Florida, said Prof. Perry.

"What must that feel like to have been in some ways the favoured son by virtue of being the good son, the responsible son all his life and then he loses his first attempt to run for political office when it's thought he's going to win and the previously goof-off brother ends up winning and then, in some ways, worst of all, he's so successful as [Texas] governor, he wins the presidency of the United States and is re-elected?" she said.

Prof. Perry questions Jeb Bush's presidential ambitions this time around. She sees the same dynamic now in the Bush family that occurred in the Kennedy political dynasty when Edward Kennedy felt the weight of expectation to restore Camelot and run for president in 1979 – when, in fact, he was perfectly happy in the U.S. Senate.

"Sometimes it just feels like to me that with Jeb Bush there's so much water under the family bridge and the political bridge. It's getting late in the day in a way for him. I mean he's not too old to be sure, but it just doesn't seem to me that his heart is in it," Prof. Perry said. 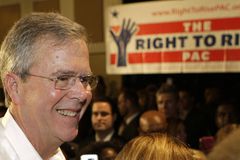