Donald Trump has officially recognized Jerusalem as Israel's capital, a move that could trigger violence and derail plans for peace in the Middle East. Here's why the holy city's status is so contentious, and why Trump is risking so much by changing decades of U.S. foreign policy

What Trump says he'll do • Who claims Jerusalem, and why • What is the Temple Mount? • Why it matters where the embassies are • Why is Trump doing this? • How the world reacted • What Israelis and Palestinians could do next

What Trump says he'll do

The United States officially recognizes Jerusalem as Israel's capital and will move the U.S. embassy there from Tel Aviv in the coming years, U.S. President Donald Trump said Wednesday, despite dire warnings from world leaders about how such a move would endanger the Israeli-Palestinian peace process.

Recognizing Israel's claim to Jerusalem upends decades of U.S. policy and is strongly opposed by America's allies, Muslim and Christian leaders and especially the Palestinian Authority, whose leaders hope to make Jerusalem the capital of an independent state someday. But Mr. Trump called the change a "long overdue step" in the peace process, saying that acknowledging Jerusalem as Israel's capital was a "necessary condition" to achieving a peace agreement:

Old challenges demand new approaches. My announcement today marks the beginning of a new approach to conflict between Israel and the Palestinians. ... It is time to officially recognize Jerusalem as the capital of Israel.

The President said he would authorize the State Department to begin the multiyear process for moving the embassy to new quarters in Jerusalem that would be "a magnificent tribute to peace."

Mr. Trump said the United States remains committed to brokering a peace agreement that both Israelis and Palestinians find acceptable, and that the embassy move did not prejudge an outcome for Israel and Palestine's borders or sovereignty. "We want an agreement that is a great deal for the Israelis, and a great deal for the Palestinians," he said, adding that the United States would support a two-state solution "if agreed to by both sides."

Who claims Jerusalem, and why

Jerusalem is a holy city to Jews, Muslims and Christians alike, but conflicting political claims by Israelis, Palestinians and the international community have made its status as a capital contentious. Here's why.

THE GLOBE AND MAIL, SOURCE: AP; ESRI; UN OFFICE FOR

THE COORDINATION OF HUMANITARIAN AFFAIRS 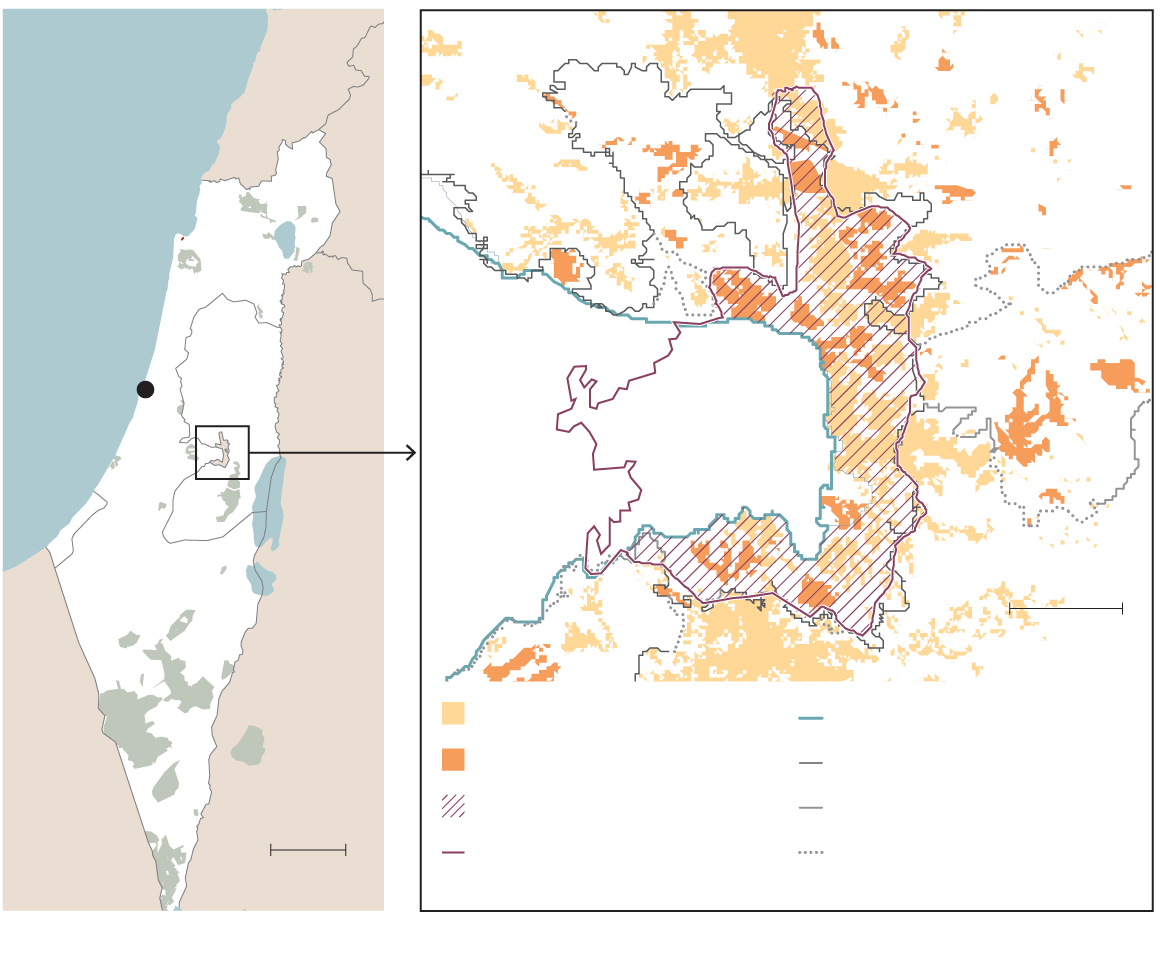 THE GLOBE AND MAIL, SOURCE: AP; UN OFFICE FOR THE COORDINATION OF HUMANITARIAN AFFAIRS; ESRI

The Israeli side: When Israel was created in 1948, Israel and Jordan each claimed Jerusalem, and eventually agreed to split it in two: Israel took the city's west, Jordan the east. Two decades later, in its Six-Day War with neighbouring Arab states, Israel seized the Palestinian enclaves of East Jerusalem and the West Bank from Jordan. Today, the city is home to most of the Israeli government's major institutions: The country's parliament, the Knesset; its Supreme Court and Foreign Ministry; and the official residence of the prime minister. But the Israeli claim to East Jerusalem, and its claim that Jerusalem is the capital, are not internationally recognized, so foreign embassies are based in Tel Aviv instead. Whereas previous Israeli governments have been willing to consider partitioning the city again as part of a peace deal with the Palestinians, the current government of Prime Minister Benjamin Netanyahu is not. Mr. Netanyahu hailed Wednesday's announcement by Mr. Trump, calling it a "historic landmark."

What keeps the sides apart: Much of Jerusalem is an open city where Jews and Palestinians can move about freely, though a separation barrier built by Israel more than a decade ago slices through several Arab neighbourhoods and requires tens of thousands of Palestinians to pass through crowded checkpoints to reach the centre of the city. Interaction between the sides is minimal and there are large disparities between wealthier Jewish neighbourhoods and impoverished Palestinian ones. In addition, most of the city's more than 300,000 Palestinians do not hold Israeli citizenship and instead are "residents."

What is the Temple Mount?

The Israeli-Palestinian conflict in Jerusalem is focused largely on the Old City, home to Jerusalem's most important Jewish, Christian and Muslim holy sites, and in particular on a hilltop compound revered by Jews and Muslims. The compound, known to Jews as the Temple Mount, is the spot where the biblical Jewish Temples stood thousands of years ago and is considered the holiest site in Judaism. Today, it is home to the al-Aqsa Mosque, the third-holiest site in Islam, and the iconic gold-topped Dome of the Rock.

The Temple Mount was the flashpoint for the second Palestinian uprising, or intifada, which erupted in 2000 after then-opposition leader Ariel Sharon visited the Temple Mount. More recently, the city experienced a wave of Palestinian stabbings in late 2015 in part because of growing numbers of visits by Jewish nationalists to the Temple Mount, and last summer, the city again experienced weeks of unrest when Israel tried to install security cameras next to the al-Aqsa Mosque after a Palestinian gunman killed two Israeli police officers.

If violence breaks out again as a result of the Trump administration's new policy on Jerusalem, the Temple Mount is a likely spot. Israeli security officials say they are monitoring the situation and prepared for all scenarios.

Why it matters where the embassies are

Customarily, national embassies are based in national capitals, but in Israel, the disputed status of Jerusalem makes that politically dangerous. To both sides, any country that bases their embassy in Jerusalem is tacitly acknowledging the Israeli claim to the city. Countries with embassies in Israel, including Canada, have sidestepped this by basing their diplomats in Tel Aviv, while still sending their world leaders for visits to Jerusalem too.

Under American law, the president must sign a waiver every six months that leaves the embassy in Tel Aviv. In June, Mr. Trump renewed the waiver, as a string of predecessors has done. This week, another six-month deadline passed without Trump renewing it. U.S. officials, speaking on condition of anonymity, told Associated Press Mr. Trump will again sign the waiver but will also instruct the State Department on Wednesday to begin the multi-year process of moving the embassy to Jerusalem.

Why is Trump doing this?

Mr. Trump's decision, a high-risk foray into the thicket of the Middle East, was driven not by diplomatic calculations but by a campaign promise. He appealed to evangelicals and ardently pro-Israel American Jews in 2016 by vowing to move the embassy. The pledge was extremely popular with major donors including casino magnate Sheldon Adelson, who donated $25-million to a political action committee supporting Mr. Trump during the presidential campaign.

White House officials said Mr. Trump remained committed to what he has called the "ultimate deal" between Israel and the Palestinians. The decision, they said, was "recognition of current and historic reality." They said it could hasten rather than impede peace negotiations by removing a source of ambiguity from the U.S. position.

But Mr. Trump's decision seems likely to disrupt, if not dissolve, the peace effort. Administration officials said they expected the Palestinians to walk away from the process, at least for now. The White House is girding itself for an eruption of violence, coordinating plans with several agencies to protect U.S. citizens abroad.

How the world reacted

International opposition to the move, including from key American allies, was increasingly strident even before Mr. Trump's announcement. In recent days, the European Union, Germany and France have all implored Mr. Trump not to take action on Jerusalem.

Arab leaders: Perhaps most significantly, Saudi Arabia spoke out strongly against the possible American step. The Saudis are a key American ally necessary for any attempt to forge a region-wide peace. The 57-member Organization of Islamic Co-operation said changing Jerusalem's status would amount to "naked aggression" against the Arab and Muslim world, and the head of the Arab League said it would be a "dangerous measure that would have repercussions" across the entire Middle East.

Canada: The Canadian government will keep its embassy in Tel Aviv, will not recognize Jerusalem as the Israeli capital and will continue to support a two-state solution, Prime Minister Justin Trudeau said during his visit to China on Thursday. "We need to work towards a two-state solution through direct negotiations," Mr. Trudeau said. "That is why we will continue to engage constructively and substantively in the region and with our partners and friends around the world."

What Israelis and Palestinians could do next

Israelis: After Mr. Trump's announcement, Mr. Netanyahu urged other countries to follow the U.S. example and move their embassies to Jerusalem too. He also stressed that any peace deal with Palestinians must acknowledge Jerusalem as the Israeli capital.

Palestinians: Officials in the Palestinian Authority warned that the peace process was in serious jeopardy because of Mr. Trump's announcement. In addition to appealing to the Pope and world leaders for help challenging Mr. Trump, the Palestinians have also stepped up their efforts to get European countries to recognize their statehood. (The UN General Assembly overwhelmingly recognized a Palestinian state in 2012, but influential countries in Western Europe have not individually recognized "Palestine.") Meanwhile, the Islamist group Hamas urged Palestinians to abandon peace efforts and launch a new uprising against Israel.

TRUMP AND THE MIDDLE EAST: MORE FROM THE GLOBE AND MAIL