On June 26, 1963, John F. Kennedy went to West Berlin and gave a speech for the ages. It was the loudest and longest in a life of great ovations. It was also the last.

Fifty years later, Mr. Kennedy in Berlin remains one of the spectacles of the Cold War. Here was an exquisite meeting of man, moment and momentum, creating a dazzling piece of theatre. Presidents have come to Berlin since to declaim and decry, but none like this.

Today, in a time when political speeches are wreathed in banality, euphemism and cliche, Mr. Kennedy in Berlin evokes the lost art of oratory. It reminds us that great speeches matter when delivered in the right place at the right time – and also, how they can go dangerously awry.

In June of 1963, Mr. Kennedy was surging. On two consecutive days earlier that month, he had given the most important speeches of his presidency, addressing the two most important issues of his time. In Berlin, he would give a third.

On June 10, Mr. Kennedy addressed nuclear arms at American University in Washington. He praised and humanized the Russians and saluted a mutual commitment to peace. He declared a moratorium on the testing of nuclear weapons and embraced negotiations on a nuclear test ban treaty. His message was less about winning the Cold War than ending it.

On June 11, Mr. Kennedy addressed civil rights from the Oval Office. He did what no president had ever done: He cast civil rights as a matter of morality. He urged Americans to think of civil rights "as old as the scriptures and as clear as the American Constitution," and asked them to examine their consciences on race. Then he announced unprecedented civil rights legislation.

Some advisers urged him to cancel his upcoming visit to Europe, which included three days in West Germany. He refused. He wanted to be seen in West Berlin, which had been isolated inside East Germany since the Russians had erected the Berlin Wall in August, 1961.

On the morning of June 26, Mr. Kennedy drove to the Brandenburg Gate. He peered into the East, grey and sullen. He had already begun jotting down phrases and practising them in German, not terribly successfully.

At 12:50 p.m. he spoke from the steps of Rathaus Schoeneberg, before hundreds of thousands of Berliners filling Rudolph Wilde Platz – leaning out windows, standing on roofs, clinging to streetlamps. He had come to the front line of the Cold War, observed its fundamental injustice, and it angered him.

Twice, memorably, he punctuated his narrative with the refrain: "Ich bin ein Berliner!"

The Berliners roared, deep and guttural. Kennedy had never seen a crowd as big or rapturous. He thought the people would have rushed the wall had he ordered them. While not given to emotionalism, the mood emboldened him to discard most of his prepared remarks and to speak extemporaneously.

That was dangerous. McGeorge Bundy, his national security adviser, was aghast listening to a hawkish JFK. "Mr. President, I think that went too far," he told him as he left the platform. In the moment, Mr. Kennedy had moved from conciliatory to confrontational, and Mr. Bundy worried it might kill the talks over nuclear arms.

That afternoon, at the Free University in Berlin, a chastened president returned to the theme of peace. Soviet Premier Nikita Khrushchev, Mr. Kennedy's interlocutor, understood the nature of spectacle, ignored the first speech and accepted the second.

As a student of history, Mr. Kennedy knew the confluence of events – the crowd, the Wall, the time – were unique. Some compared his feverish appearance to the triumphal passage of a Roman emperor. "We'll never have another day like this as long as we live," he mused.

Mr. Kennedy would live to see the Limited Nuclear Test Ban Treaty, his proudest achievement. But in his last five months there would be no more speeches like this or the others that tumultuous June, when Pope John died, the Profumo scandal broke and the Buddhist monks in Vietnam began burning themselves alive in protest.

Mr. Kennedy was exhilarated by Berlin. As he departed that afternoon, he said that one day he would leave a note to his successor, "to be opened at a time of some discouragement."

It would have three words: "Go to Germany."

Andrew Cohen, a journalist, author and professor of journalism at Carleton University, is writing a book on the presidency of John F. Kennedy.

Andrew Cohen, a journalist, author and professor of journalism at Carleton University, is writing a book on the presidency of John F. Kennedy. 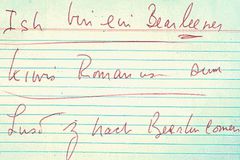 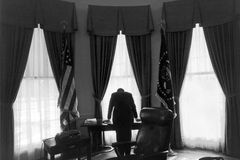