Syria's isolation continues to grow as, for the first time, an Arab head of state has called for Syrian President Bashar al-Assad to step down.

The Jordanian King may have chosen his words carefully, but there's no denying they will have an impact, said a former adviser to King Abdullah's father, the late King Hussein.

"Syria will respond," said Adnan Abu-Odeh, a chief of Jordan's Royal Court in the early 1990s and a former ambassador to the United Nations.

"I'm not sure what they'll do, but they won't tolerate such a blunt statement from a neighbour," he said, ominously.

"The King's statement may encourage others to take similar positions," added Mr. Abu-Odeh, a board member of the International Crisis Group, a non-governmental organization that promotes conflict resolution. "Arabs always need someone to lead them," he said.

But even this watershed condemnation doesn't mean it's over for Mr. al-Assad, at least not yet.

The accumulating criticism of Syria in the Arab world is "a moral boost to the protest movement in the country and the opposition groups outside," said Ammar Abdulhamid, a Syrian human-rights activist at the Foundation for the Defence of Democracy in Washington. "But it will have no direct practical effect unless it is coupled with greater support to the Free Syrian Army, the establishment of safe zones inside Syrian territories and the imposition of a no-fly/no-go zone."

"The Assads are committed wholeheartedly to the ongoing militarized crackdown," Mr. Abdulhamid said, "and they will not be moved and removed by mere symbolic gestures and diplomatic pressures."

"The three dynamics of revolution are all at work in Syria," Mr. Abu-Odeh said, describing the erosion of the country's economy, defections from the army and dissent from within the ruling minority. "But they're working slowly."

Indeed, King Abdullah acknowledged that "with all that is going on, they [the Assad regime]are still in a pretty comfortable position," and it will take a long time and there will be a lot more violence, he said, before the country's leadership crisis is over.

Determined to speed things along, the European Union on Monday extended financial sanctions to 18 more Syrians linked with the regime's crackdown and approved plans to stop Syria from accessing funds through the European Investment Bank. The Arab League, too, says it will announce sanctions against Damascus after the suspension of Syria's membership, which is to take effect Wednesday.

However, sanctions against the country's exports (principally oil) and other financial barriers will not be as suffocating as they might be, since two of Syria's immediate neighbours, Lebanon and Iraq, are opposed to the punitive measures.

As well, Russia and China say they will continue to stand by Damascus. In October, the two blocked a United Nations Security Council resolution critical of Syria's crackdown.

Russian Foreign Minister Sergei Lavrov criticized the Arab League's decision to suspend Syria's membership as "incorrect" and accused Western countries of sabotaging the Arab proposal to end the violence in Syria by encouraging the opposition to reject all dialogue.

In Damascus, Syrian Foreign Minister Walid al-Muallem thanked Russia and China for their support and insisted that "Syria is not Libya."

"The Libyan scenario will not be repeated," he said. "What is happening in Syria is different from what happened in Libya, and the Syrian people should not worry."

The Egyptian and Tunisian scenarios also are not being repeated, noted Mr. Abu-Odeh, pointing out that Syria's opposition has so far failed to create a political mass in the capital itself.

"The uprisings in Egypt and Tunisia were victorious because of their support in the power centres of the countries," he said. So far, this is not the case in Syria as both Damascus and Aleppo are relatively free of protests.

The Arab League proposal was deficient, Mr. Abu-Odeh said, since it only called for both sides to put down weapons and talk with the other side.

"It should have included what would come next in the country," he said.

This is a point King Abdullah also made, noting that it was the system in Syria, more than the Assads themselves, that was the problem.

"If Bashar [al-Assad]has the interest of his country, he would step down," King Abdullah said, "but he would also create an ability to reach out and start a new phase of Syrian political life." 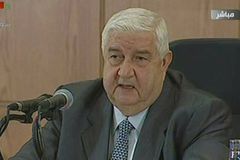