Kenya's Supreme Court, giving its first explanation for its historic decision to nullify last month's election, has blasted the Kenyan election commission for a litany of "illegalities and irregularities" and a "disturbing" refusal to obey judicial orders.

The nullification of the August presidential election was a democratic landmark: the first time an African election has been overturned by a legal challenge from an opposition party.

But the court ruling has also triggered a political crisis, with escalating tensions between the two main parties and a mounting threat to the hard-won independence of Kenya's courts.

The court ordered the election commission to hold a new election by the end of October, and the commission chose Oct. 17 as the new date. But distrust and political conflict have reached such levels that the latest election date is still being fiercely challenged.

Supporters of the two main political parties rallied outside the Supreme Court and came close to clashing violently as the court's ruling was read on Wednesday. Police dispersed them by firing tear gas.

The election commission, in its official results last month, said President Uhuru Kenyatta won the election with 54 per cent of the vote, while the veteran opposition leader Raila Odinga was deemed the runner-up with 44 per cent. The Supreme Court, by a 4-2 vote, nullified the election earlier this month, but it did not issue its full reasons until Wednesday.

Mr. Kenyatta denounced the Supreme Court judges as "crooks" and vowed to take action against them. His supporters have engaged in furious attacks on the court, blocking roads, burning tires, filing petitions and protesting outside the court building. They accuse the judges of "stealing" the election. Analysts have warned that the rising pressure could erode the independence of Kenya's judiciary.

The detailed ruling on Wednesday did not ease the tensions at all. Kenya's deputy president, William Ruto, condemned the court ruling as a "coup" against the "sovereign will of the people."

The chief justice of the Supreme Court, David Maraga, says the judges have received death threats. The police are failing to do enough to protect the judges from the threats and verbal attacks, he said this week.

"These attacks are denigrating, demeaning and degrading and are meant to intimidate, threaten and cow the institution and individual judges," Justice Maraga told a news conference on Tuesday. "Such acts are not only unlawful but savage in nature."

The judges are "prepared to pay the ultimate price" to protect the constitution and the rule of law, he said.

The judges won support from 16 ambassadors and senior diplomats from North America and Europe, who issued a joint statement on Tuesday in defence of the Kenyan courts.

The ambassadors, including Canadian High Commissioner Sara Hradecky, complained of "baseless attacks" and "hate speech" against the Kenyan judiciary and election commission. Foreign diplomats have also been subjected to "hate speech and incitement," they said.

They cited, in particular, the widely circulating claim by government supporters that the Kenyan judiciary had been "captured" by opposition activists. There is a risk that these kinds of attacks could undermine Kenya's constitution, the rule of law and the country's peace and security, the diplomats said.

Human-rights activists warned of the risk of violence against the judges. "The hostile rhetoric and escalating tensions in Kenya … are a source of grave concern," said a statement by Otsieno Namwaya, an Africa researcher at Human Rights Watch. "The police should take immediate steps to prevent violence."

While the judiciary is under fire from the government, the election commission is facing sharp criticism from Mr. Odinga, who says he will boycott the election rerun next month unless the commission is reformed and its chairman is replaced.

In their detailed ruling on Wednesday, the majority of Supreme Court judges said the election last month was "neither transparent nor verifiable" and did not meet the requirements of the election law or the constitution.

The commission had announced the election results without waiting for the returns from all the polling stations, the judges said. "These violations of the constitution and the law call into serious doubt as to whether the said election can be said to have been a free expression of the will of the people," they said.

"To close our eyes to the constitutional violations would be a dereliction of our duty."

Because the commission refused to obey a court order to allow experts to analyze its vote-tallying system, the court had no alternative but to accept the opposition claim that the computer system was "infiltrated and compromised and the data interfered with," the judges said.

At a minimum, they said, the commission had "bungled the whole transmission system and was unable to verify the data."

In addition, some of the election results forms were of "dubious authenticity" and could be forgeries, they said.

Globe editorial: Why foreign observers didn’t see what was happening in Kenya
September 10, 2017 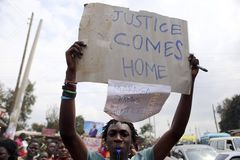 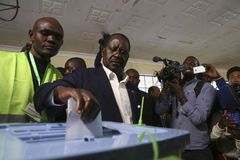 Kenya’s opposition leader says his coalition will not share power
September 3, 2017
Follow Geoffrey York on Twitter @geoffreyyork
Report an error Editorial code of conduct
Due to technical reasons, we have temporarily removed commenting from our articles. We hope to have this fixed soon. Thank you for your patience. If you are looking to give feedback on our new site, please send it along to feedback@globeandmail.com. If you want to write a letter to the editor, please forward to letters@globeandmail.com.
Comments