For the second day in a row, Omar Khadr refused to appear Friday for pre-trial hearing on murder and terrorism charges, claiming he was being subjected to unnecessary and humiliating searches by military guards.

On Thursday, Mr. Khadr refused to attend the morning session after refusing to wear the sensory-depriving goggles and earmuffs that U.S. soldiers require prisoners to put on - even while they are in a windowless vehicle being transported from the camps to the converted air terminal used as a courtroom on the leased naval base in Cuba.

Today's refusal came after Mr. Khadr was seen by doctors who apparently treated recurring eye problems which, he claimed

"I want to come to court but I want to come respectfully," Mr. Khadr said, according to U.S. Marine Capt Laura Bruzzese, who testified at the opening of today's session.

``He objects to having his waistband searched'' but that is a reasonable security measure, the judge said, adding that Mr. Khadr's objections - unlike those of a day earlier -- were unrelated to his eye problems.

Mr. Khadr, who is blind in one eye and has shrapnel shards in both, kept his face covered and his head down as a 27-minute video was played, showing him as a grinning, 15-year-old building detonators in a carpeted room while al-Qaeda trainers exulted: "God willing we will get a good number of Americans.''

The defence team is fighting to have the video - and Mr. Khadr's confessions - ruled inadmissable, claiming U.S. interrogators tortured and abused the gravely wounded teenager in the weeks after his capture.

But Mr. Khadr's condition and his care eclipsed Thursday's hearing. The military judge, Col. Parrish, refused defence requests that a doctor on the defence team be allowed to testify as to the seriousness of Mr. Khadr's eye problems. Mr. Khadr failed to appear for the morning session after he refused to wear the sensory-depriving, blacked-out, ski goggles and earmuffs detainees are required to wear for transport from the prison camps to the courtroom.

Col. Parrish then cancelled it and warned Mr. Khadr's lawyers that unless they persuaded him to attend, he would order him trussed up and brought to the court, at least long enough for him to be told of his right to absent himself. That right was apparently omitted from Mr. Khadr's arraignment.

Col. Parrish rejected defence requests to examine whether Mr. Khadr should be forced to wear the goggles, even while in the back of the armoured vehicle used to transfer prisoners from the camps to the court. The judge said he "wasn't going to second guess the decisions made by security" personnel.

"It's appalling that the judge didn't look into Mr. Khadr's condition, he should have ordered an appropriate medical examination," said Daphne Eviatar, an observer with Human Rights First.

"I hope U.S. authorities hear from the Canadian government," that they want prompt attention to his medical needs, said Alex Neve, director-general of Amnesty International Canada.

By nightfall, U.S. Navy Commander Bradley Fagan said a prison camp physician was treating Mr. Khadr. There is no ophthalmologist - or eye specialist - on this little-used naval base.

Stephen Xenakis, a retired brigadier-general and physician working with the defence team, said he had examined Mr. Khadr and that his previous wounds and long-running eye problems suggested his condition required urgent treatment, adding he suspected the goggles may have aggravated the pain.

The pre-trial hearings, already badly behind schedule, heard from an FBI interrogator Robert Fuller, who said Mr. Khadr gave him detailed accounts of meetings with senior al-Qaeda leaders and how his father, Ahmed Said Khadr, was a major financier of training camps safe houses in Afghanistan and close confidant of Osama bin Laden.

Mr. Fuller also said Mr. Khadr told him he slept with an AK-47.

In the video, apparently made in the early summer of 2002, al-Qaeda operatives are shown digging holes in a roadway, planting old Soviet anti-tank mines, running detonator wires and using a hand-held radio to trigger the explosions. In stark contrast to his current burly, bearded physic, the then 15-year-old Mr. Khadr, is a thin teenager with wispy sideburns clowning for the camera and helping to assemble detonators.

Defence lawyers expected to argue that Mr. Khadr was just a child, obeying the orders of his father and other al-Qaeda leaders. 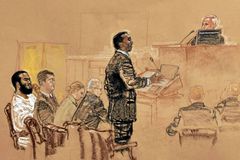 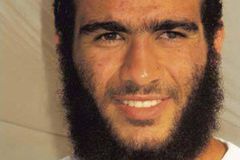