The special tribunal dealing with Khmer Rouge atrocities has for the first time filed charges related to the killing nearly 37 years ago of Stuart Glass, a Canadian whose yacht was attacked while he sailed near the shores of Cambodia.

Mr. Glass, who grew up in Richmond, B.C., is believed to have been gunned down when the yacht Foxy Lady was intercepted by the Khmer Rouge Navy in August of 1978. Two other men aboard the boat, a New Zealander and a Briton, were captured, tortured for weeks, then executed.

The latest charges, part of Case 003 of the Extraordinary Chambers in the Courts of Cambodia, come after years of internal wranglings over whether more suspects should be brought to trial, beyond the initial indictment of five high-ranking figures.

The tribunal, which is backed by the United Nations, is a hybrid court that operates with local and international jurists. The foreign judges and prosecutors have clashed in the past with their Cambodian counterparts over whether to charge more suspects.

Tuesday's charges were filed by co-investigating judge Mark B. Harmon of the United States, without the agreement of Cambodian co-investigating judge You Bunleng. Specifics of the allegations against Mr. Meas were accidentally made public in December, 2012, when a prosecution submission was mistakenly posted on a public Web page.The document said Mr. Meas was commander of the Democratic Kampuchea Navy from April, 1975, to January, 1979.

The DK Navy "was responsible for aggressively defending" waters claimed by the Khmer Rouge, the document said, adding that many Thai and Vietnamese fishermen were captured in border areas, sent to the S-21 prison in Phnom Penh, tortured and executed.

More details about what happened to Mr. Glass were heard during the trial of S-21 prison head, Kaing Guek Eav, also known as Comrade Duch.

At a hearing in August, 2009, New Zealander Rob Hamill told the court that his brother, Kerry, had befriended Mr. Glass while the two were staying in Australia.

Together, they bought a 28-foot double-ended sloop named Foxy Lady and sailed around Southeast Asia. With a British passenger, John Dewhirst, they were heading for Bangkok but were blown off course by bad weather, Rob Hamill told the court. The boat took shelter behind Koh Tang, an island about 55 kilometres off the coast of Cambodia, near the border with Vietnam. A forced confession by Mr. Dewhirst was later found in S-21, describing how a Khmer Rouge gunboat attacked them while moored outside Koh Tang.

"Shortly after dark … a boat began to close in on us very quickly. I was about to go up on deck when the boat opened fire," Mr. Dewhirst said in his type-written confession, which was read in court. "The gunboat came in closer and lit us with its spotlight. Stuart was shot and Kerry helped him out to sea in a lifebuoy. Kerry and I went over the side for safety and waited until the gunboat came in to pick us up. He told me later that Stuart had died and had been buried at sea."

After years of hearings, the tribunal has only convicted three people: Comrade Duch and two senior government members, Nuon Chea and Khieu Samphan. The latter two are currently on trial on other charges, including genocide.

The cases against two others ended when former foreign minister Ieng Sary died in 2013, while his wife, social affairs minister Ieng Thirith, was deemed unfit to stand trial because of dementia. 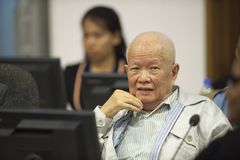 Body of missing Canadian Dave Walker found in Cambodia
May 1, 2014 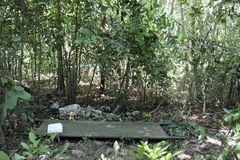