Call it the year of growing up dangerously.

From Iraq to Syria, the Central African Republic to South Sudan, to the classrooms of Nigeria and Pakistan, to the beaches of Gaza – 2014 was a spectacularly unsafe year to be a child in some parts of the world.

One piece of evidence is the recent report of the United Nations Children's Fund which called 2014 a year of "horror, fear and despair" for children.

"Never in recent memory have so many children been subjected to such unspeakable brutality," UNICEF chief Anthony Lake declared on Dec. 8 when the agency released findings that 15 million children were caught in violent conflicts, while another 230 million were living in countries plagued by armed conflicts.

That's when Taliban attackers wearing suicide vests attacked a school for the children of military personnel in Peshawar, Pakistan, massacring 148 people, 132 of them children.

Aside from the human-generated violence, the West Africa Ebola outbreak orphaned thousands of children and deprived five million from going to school, UNICEF says.

"I saw that UNICEF report too and I couldn't agree more fully," Perry Mansfield, World Vision director for South Sudan said over the phone from Juba, the capital of that forgotten war-torn country.

Children aren't just collateral damage – they are being targeted. In April, the militant group Boko Haram abducted more than 275 teenaged girls from one school in northern Nigeria.

A recent report by Human Rights Watch concluded the Nigerian teenagers were "forced to marry, convert, and endure physical and psychological abuse, forced labour, and rape in captivity."

"In previous years, there was a concept around the protection of civilians, in particularly children."

Children are also being forced to join armies as fighters, including 10,000 in the Central African Republic this year alone, she said.

For many, the deaths of four Gaza boys killed on a beach during Israel's summer war with Hamas terrorists came to epitomize the tragedy of children in conflict. The boys, all cousins, were strafed by shells fired from an Israeli navy ship after Hamas broke a ceasefire and fired rockets on Israel.

Those boys were among 538 children killed in Gaza during the 50-day war, along with 3,370 injured. Another 54,000 were rendered homeless.

Donors are growing weary and not meeting the funding demands of the growing list of international crises, said Khan.

In January, UNICEF made a $2-billion appeal but only half has been raised, forcing the agency to scale back what it can offer in crisis zones, including education.

An estimated 28.5 million primary-age schoolchildren are out of school in countries affected by conflict, Khan said.

In the Central African Republic, 660,000 children are out of school in country with a population of less than five million.

At least two million Syrian children are out of school in Syria or neighbouring countries, and some have not seen the inside of a classroom in two or three years.

David Morley, head of UNICEF Canada, recalled a visit he paid to one family in a Syrian refugee camp this past year.

He saw a small pile of books and asked their 12-year-old girl to tell him about one of the stories.

"She looked at me and said, 'I don't know. I used to know but I haven't been at school for three years, and I've forgotten how to read,'" Morley recalled.

Fatima Al Ansar, of Mali, has been luckier than some.

She is going to college in Hartford, Conn., as part of a MasterCard Foundation scholars program.

She's trying to raise money for a school that she's helping to build back in her home in northern Mali, where a rebellion continues to cause massive upheaval.

So far, none of the 56 girls, aged five to 14, has been able to go to the school in the past year because of the continuing unrest.

"If you don't allow people to get an education the future of the country is obviously not going to be good," she said. German-designed ‘smart’ guns rerouted after cultural backlash in U.S.
May 12, 2018 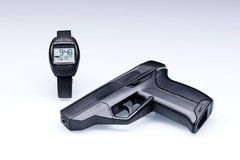 Opinion
Lessons in giving from the wave that took all
May 12, 2018