A wave of killings targeting secular bloggers in Bangladesh is a long way from real-estate agent Farid Ahmed's suburban Toronto neighbourhood. But the murders could not feel closer.

From his home, Mr. Ahmed is steering the Bengali- and English-language blog Mukto Mona – which translates as "free thinking" – through a difficult chapter as its writers are struck down.

The blog's founder and a friend of Mr. Ahmed's, Bangladeshi-American Avijit Roy, was hacked to death while leaving a book fair in the capital Dhaka in February. Dr. Roy's wife, Rafida Ahmed, sustained serious head injuries and the loss of her thumb in the machete attack carried out by suspected religious militants.

"It's a big loss. It's not only I lost a friend. But in online, especially in the Bengali community, Mukto Mona is a big thing," said Mr. Ahmed. For Bangladeshi atheists, the site is a gathering place for debate and opinion – a kind of "umbrella," said Mr. Ahmed.

The killings did not stop. Another blogger was killed in March. And this month, a Mukto Mona writer was commuting to his bank job when he was chased by masked, machete-wielding men and hacked to death.

For Mr. Ahmed, the blog that he helped build has become a matter of life and death – as its writers inside Bangladesh fear for their lives and look to him for answers. From the safety of Canada, he realizes there are no easy solutions.

Speaking at his Toronto home, Mr. Ahmed is pensive. He is getting messages from Mukto Mona writers in hiding. "Somebody will get killed within a short time," he said with certainty.

The death threats extend to those beyond Mukto Mona, including intellectuals, academics and secular bloggers for other sites. Mr. Ahmed shared a message on his phone that someone sent to a contact inside Bangladesh: "We have already prepared your visa to hell," it read.

With police powerless to protect bloggers, Mr. Ahmed said there was an effort to get threatened Mukto Mona writers out of Bangladesh. But that has not always worked.

Ananta Bijoy Das, the murdered blogger and bank employee, was invited to speak at a PEN event in Sweden on May 3. But his two-week visa application was rejected. He was killed on May 12. It is unclear whether Mr. Das planned to apply for asylum had he been granted the travel visa.

Among the site's nearly 300 contributors and core of 35 writers there is growing concern. More than half of those writers – many inside Bangladesh, but others in Canada, Australia and the United States – are now writing under pseudonyms.

"After these killings, everybody is scared.… I changed their name because I cannot take the risk of their life," said Mr. Ahmed.

He has also stripped most names of the volunteer team that runs the site, which costs about $1,200 to host and operate.

In 2000, Mr. Ahmed and his family moved to Canada. He first discovered Mukto Mona in 2001 while living in Windsor, Ont., and searching online for news and commentary about Bangladesh. What he found was a space for writings on science, atheism and challenging religious orthodoxy.

"It came as a surprise to me. I never thought there were people who thought the same things I think," he recalled. He started writing for the site and became one of the moderators in 2005.

There would be moves to Calgary, Miami, Mississauga and eventually Toronto – and several different day jobs. Outside of work, he wrote for Mukto Mona and selected, edited and posted content online while vetting new contributors.

Through the tumultuous last few months, Mr. Ahmed has been haunted by the murder of Dr. Roy.

"It was hard for me to believe that he actually got killed.… He did not do anything wrong," said Mr. Ahmed.

For 10 years, he and his U.S.-based collaborator built up Mukto Mona along with a team of Bangladeshi residents and members of the diaspora.

The two met only once when Farid Ahmed and his family were living in Miami and Dr. Roy drove from Atlanta to visit and stayed for a night.

"… He debated against so many people. I always thought he was a rough-and-tough kind of person. But when I met him I was really surprised to find that he's a very humble, very gentle, very soft-spoken person," said Mr. Ahmed.

The goal of Mukto Mona is not about "bashing" any one particular religion like Islam, but critiquing all religions, explained Mr. Ahmed.

"We don't want people to become atheists all of a sudden. But we want people to think [in a] rational way," he said. Another major theme is promoting scientific thought.

Mr. Ahmed believes Mukto Mona has an important role in Bangladesh's thriving online digital space. Since the killings, daily online traffic has nearly tripled to 8,000 – even as the site itself has been disrupted by hackers.

Mr. Ahmed said there is no question that Mukto Mona will continue. "If we stopped the website, then we're accepting defeat. We'll not. We'll fight," he said.

For Mr. Ahmed and his wife Afroja, any return to Bangladesh is virtually impossible. His own writings for Mukto Mona have focused on "safe" subjects like literature and history – and largely steered clear of science and religion, which are not his areas of expertise, he explained. 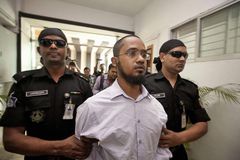