The U.S. ambassador to South Korea, Mark Lippert, is usually seen through the pictures he tweets of his friendly basset hound, Grigsby, and the people who want to pet his dog – from adorable little girls to South Korean police officers.

On Thursday, the pictures of Mr. Lippert in Seoul were horrifyingly different: Pale-faced with shock, Mr. Lippert was seen spattered with his own blood, clutching a wound on his face while others pressed tissues to his punctured wrist. A car took him to Yonsei University's Severance Hospital to get 80 stitches on a lengthy gash running down his cheek.

While it is shocking that a knife-wielding assailant could attack a U.S. envoy at a breakfast forum in South Korea's capital – organizers said the embassy had not asked for security checks – Mr. Lippert is, in some ways, a victim of a combustible mix of historical trends and recent geopolitical developments. And the United States is inextricably intertwined in both South Korea's history and modern policy.

The attacker was identified as Kim Ki-jong, an ardent Korean nationalist with a history of anti-U.S. protests who previously was arrested for attacking the Japanese ambassador because of a long-standing territorial dispute over some remote islands. Before lunging at Mr. Lippert with a 25-centimetre blade, Mr. Kim had cried out for reunification of the two Koreas. This is not an uncommon or controversial sentiment in South Korea, where North Korea is seen not as a farce – as it is in Hollywood – but as a tragedy. People are starving. Elderly family members divided by an imposed border in 1945 and then the Korean War remain separated as they die off, one by one.

In many ways, the incident was not simply the act of a deranged lone wolf. South Korean President Park Geun-hye herself was slashed across the face in 2006 when she was campaigning (she got 60 stitches). The attack symbolized the frustration of many South Koreans who want more concrete progress on unification – even in defiance of the United States.

Unification does not mean the two Koreas would become one: There are two basic views for how this could play out. The liberal view is that incremental progress through relatively harmless cultural, environmental and humanitarian exchanges – giving aid, building museums of Korean culture and allowing elderly members of families divided by the border to meet in person or by exchanging letters, for example – will lead to more openness and economic co-operation. But since South Korea's "Sunshine Policy," which began in 1998 to  promote this ideal and ran approximately 10 years, such initiatives have slowly dropped off, and tensions have risen. Many fear the conservative view is in the ascendant – a belief North Korea will eventually collapse and its people will be absorbed by an economically more powerful South Korea, with the help of the United States (and perhaps China, which has propped up the regime but failed to initiate economic reforms there).

As he was wrestled to the ground, it became clear that Mr. Kim – who has travelled to North Korea several times – saw joint military exercises by South Korea and the United States as a provocation to the North that prevents a peaceful joining of the two countries. He has protested against the military drills before. And North Korea's official Korea Central News Agency praised the attack as a "knife of justice" that was "deserved punishment for the warmongering United States."

South Korea and the United States have enjoyed a strong security alliance since the end of the Korean War in 1953, and Seoul still has a strong U.S. military presence. But it is a love-hate relationship, with instances of anti-Americanism in South Korea dating back to the division of the country, the occupation of a military base once used by Korea's Japanese colonizers, right up to South Korean opposition to the Iraq War. The enmity is in part due to incidents involving U.S. soldiers, particularly in 2002, when a U.S. military vehicle struck and killed two South Korean girls. But Thursday's events are not that simple.

"The natural tendency in the face of an incident like this is to look for anti-Americanism in Korean society, and the [Korean] left in particular, to explain the violent attack on the U.S. ambassador," said John Delury, a professor at Yonsei University's Graduate School of International Studies, who notes that Mr. Lippert is well liked in South Korea.

"In fact, while there is a long history of anti-American sentiment in South Korea, it is mostly just that – history. The man who attacked the ambassador is some twisted legacy of that history, but represents an extremely marginal place now."

But some in South Korea believe U.S. involvement on North Korean issues, and in particular an emphasis on denuclearization and "strategic patience," is a heavy counterweight to those who want a gradual increase in cultural and humanitarian co-operation.

The United States can wait, but many South Koreans cannot – the generation who remember the war, and have not seen relatives in North Korea for decades, are dying. And although that certainly is not a reason to engage in criminal violence against an innocent diplomat, it goes some way to explaining the ratcheting up of tensions on the Korean peninsula.

Editor's note: An earlier version of this story incorrectly said South Korea's "Sunshine Policy" ended in 1998. In fact, it began in 1998 and continued for approximately 10 years. 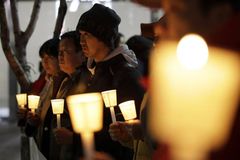 new
Detained Canadian pastor’s ties may have put him at risk in North Korea
March 5, 2015 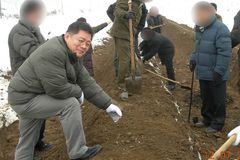