Barack Obama is taking on the mighty National Rifle Association after the gun lobby invoked his children in its bid to post armed guards in every American school and derail new gun control measures favoured by the President.

The unprecedented move by the NRA to reference Mr. Obama's school-age daughters in a pro-gun ad drew gasps and a scathing rebuke from the White House. And it heralded months of bitter confrontation between Mr. Obama and the gun lobby, a group the President had avoided antagonizing until last month's shooting of 20 schoolchildren.

Calling on Americans to ignore attempts by the NRA to "gin up fear" about him taking away their weapons, Mr. Obama unveiled an expansive package of gun control proposals on Wednesday. Their aim, he said, is to keep guns out of the wrong hands and ensure the safety of American children, which he called "our first task as a society."

"This will be difficult," Mr. Obama said, with relatives of the victims of last month's Newtown tragedy in the audience. "Special interest lobbyists [will warn] of a tyrannical, all-out assault on liberty – not because that's true, but because they want to gin up fear."

The NRA preceded the President's announcement with a video calling him an "elitist hypocrite" for sending his daughters to a private school protected by armed guards. Mr. Obama had voiced skepticism after the NRA last month proposed placing armed security in all of the country's nearly 100,000 public schools. His daughters, aged 14 and 11, attend the exclusive Sidwell Friends School and have ongoing Secret Service protection.

White House press secretary Jay Carney called the NRA ad, which has run on television and remained on the group's website on Wednesday, "repugnant and cowardly."

On Wednesday Mr. Obama promised funding to help schools hire armed guards "if they want them." His proposals include a plan to enable school districts to hire as many as 1,000 "school resource officers," or specially-trained police officers. However, that is only an incremental increase from the thousands of police officers already stationed in the country's schools, mainly to prevent gang violence.

The NRA issued a blanket condemnation of Mr. Obama's orders and proposals.

"Attacking firearms and ignoring children is not a solution to the crisis we face as a nation," NRA chief executive officer Wayne LaPierre said in blog post. "Only honest, law-abiding gun owners will be affected and our children will remain vulnerable to the inevitability of more tragedy."

Mr. Obama conceded that members of Congress will be under relentless pressure from the NRA to vote against gun control legislation. But he called on voters – including those in pro-gun red states – to pressure politicians to put their kids first. "Ask [members of Congress] what's more important – doing whatever it takes to get an 'A' grade from the gun lobby that funds their campaigns or giving parents some peace of mind when they drop their child off for first grade?"

He noted that "an overwhelming majority" of Americans support screening all potential gun buyers for criminal records and mental health histories. The current background check requirement applies only to licensed gun dealers. The President is proposing to extend it to cover private transactions and "gun show" purchases.

Fully 85 per cent of Americans favour such universal background checks, according to a Pew Research Center poll released this week, while 55 per cent support banning high-capacity clips and assault weapons, the type of guns used in most recent mass shootings.

However, Duke University political science professor Kristin Goss noted that the main obstacle to getting gun control legislation through Congress stems from what is known as the "activism gap" between pro-gun voters and those who favour tighter gun controls.

"It's never really been a public opinion problem," she said. "It's a participation problem."

Indeed, Pew found that gun rights activists are far more likely than gun control advocates to contribute money to groups supporting their cause and contact elected officials to pressure them on gun policy.

Mr. Obama sought to counter the gun lobby's argument that the "right to bear arms" entrenched in the U.S. Constitution prohibits gun controls against the array of other constitutional rights that are threatened by gun violence in the United States.

The recent mass shootings at a Sikh temple in Wisconsin, a Colorado movie theatre, an Oregon shopping mall and the elementary school in Newtown, Mr. Obama noted, were an attack of freedom of worship and assembly and deprived dozens of Americans of their right to life, liberty and the pursuit of happiness.

"Those rights are at stake," he said. "We're responsible." 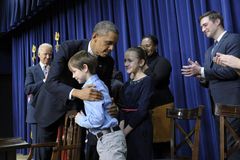 Obama gets ready for hard road ahead with gun-control initiative
January 15, 2013 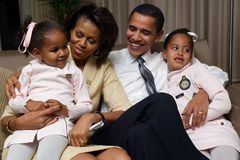 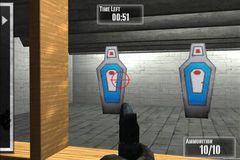 Newtown asks Obama: 'What is it worth doing to keep your children safe?'
January 15, 2013 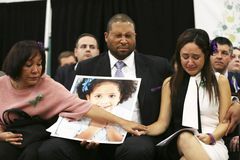 Opinion
Has the powerful gun lobby met its match in Gabby and her Glock?
January 12, 2013 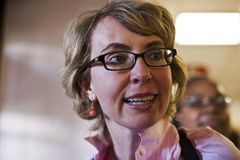