On Christmas morning, 1944, 23-year-old Corporal George Peterson of the Winnipeg Grenadiers was told by his Japanese guards that he wouldn't have to go down the Mitsubishi-owned coal mine that day.

Mr. Peterson, who had already spent three grueling years as a prisoner of war, said it looked as though the POWs were about to get a break from the slave-like working conditions. The guards first dragged out a fir tree, then brought out extra food for the famished prisoners, including riceballs and beer.

"They lined us up behind the table and took a picture," says Mr. Peterson, now 94. But then "they said we could go back down the mine. … When we came up from the mine at about 5 p.m., the guards were laughing at us, saying the food was pretty good. We laughed right back, because we were trying not to let them know how much it hurt."

Nearly 70 years after the end of the Second World War, Mitsubishi Materials Corp. has begun to issue historic apologies to POWs – but it has not yet apologized to Canadians.

On Sunday, Mitsubishi outside director Yukio Okamoto, who is also an adviser on historical issues to Japanese Prime Minister Shinzo Abe, made a landmark apology to American POWs in Los Angeles – the first Japanese company to do so – and later said the firm would also apologize to British, Australian and Dutch POWs.

But Canadian POWs, the vast majority of whom were captured by the Imperial Japanese Army when it overran Hong Kong as part of a surprise offensive that included the bombing of Pearl Harbor in December, 1941, have not been included. When reached by The Globe and Mail this week, a spokesperson for Mitsubishi Materials said they "have no records and no means to verify whether or not we used Canadians POW in our predecessor company" – but that the company would make such an apology if presented with proof that they had forcibly employed Canadians.

"We will consider [an] apology [to] such people if we can verify the fact and have [the] appropriate opportunity," Mitsubishi spokesperson Takuya Kitamura said in an e-mail.

But the president of the Hong Kong Veterans Commemorative Association, Carol Hadley, is unsure what sort of proof or evidence might remain beyond oral accounts – since, she said, many of the historical records were destroyed in Japan. Her father Borge Agerbak was captured in Hong Kong, and told her he was forced to work in a separate Mitsubishi mine.

"I'm pleased that they are apologizing to some, I just wish they would include the Canadians in it," said Ms. Hadley, whose father died in 2001 and who is now working with others to amass documentation. "A lot of our veterans would never drive anything that had any Mitsubishi parts in it. My dad thought he should have had some shares in that company for all the work he put in."

Roughly 1,600 Canadians were captured at the Battle of Hong Kong. More than 250 of them would die in Japanese captivity by the end of the war as they suffered through starvation, beatings and diseases such as diphtheria.

The legacy of such abuses by Japanese soldiers and businesses continues to reverberate. Unlike in Europe, which moved on after Nazi Germany's atrocities, modern East Asian geopolitics are still complicated by Japan's refusal to fully acknowledge its violent military colonization of Asia in the 20th century – from the annexation of Korea in 1910 to its subsequent invasion of China and much of Southeast Asia.

Although Japanese leaders have in the past offered contrition, there is constant fury from China and South Korea over issues related to Japan's wartime record, such as military brothels. And there is great anticipation over remarks Mr. Abe is set to make on Aug. 15, the 70th anniversity of the end of hostilities. Mitsubishi's unprecedented apology, as well as a financial agreement it reached on Thursday with Chinese forced labourers, are historic steps in acknowledging past corporate injustices, and form just part of Japan's complicated process of reconciling with its history.

In an interview this week, Mr. Peterson said there were roughly 125 other Canadians imprisoned and employed alongside him at that particular Mitsubishi coal mine – adding that prisoners suffered through "disease, starvation, overwork" and that some prisoners were even murdered by their Japanese captors.

"I think they should apologize to the Canadians, too," said Mr. Peterson, who was one of three Canadian POWs who traveled to Japan and accepted a separate apology from the Japanese government in 2011. "I'd accept it, if they apologized."

The tales from POWs interned by the Japanese are truly horrifying. One Canadian POW, Edward Shayler, described life in a Mitsubishi coal mine on the day prisoners were told they would be buried alive in the mine if Allied forces invaded Japan. In an account recorded on the website of the group run by Ms. Hadley, Mr. Shayler wrote that after 1,365 days of confinement without adequate food or warmth, he was riddled with lice, fleas and bed bugs. He had sores all over his legs, and his teeth were aching, covered in a "thick scale," and riddled with holes. "The hunger pangs were something I never could get used to," Mr. Shayler wrote.

There was some resistance. Mr. Peterson, who was forced to labour in Hong Kong before he was shipped to Japan's mines, described working on a runway at Hong Kong's Kai Tak airport, shoveling soft clay onto the tarmac. He said the first Japanese plane to land "went through the runway," but a Japanese engineer was blamed. Another group of Allied POWs at a Japanese shipyard, he said, managed to burn down the shed that held ship blueprints – but also avoided blame. At times, Mr. Peterson added, the POWs at the Mitsubishi mine would commit subtle acts of sabotage by refusing to haul out the required amounts of coal during their 12-hour shifts, which simply made the guards keep them down the mine even longer.

Jennifer Lind, an associate professor at Dartmouth College who has written a book about apologies in international politics, said there is no legal obligation for Japanese corporations to get involved in the complex apology process – although German companies, along with the German government, agreed to offer roughly €4.4-billion ($6.3-billion) to more than 1.6 million people in nearly 100 countries who were forcibly employed or used as slave labourers in Europe during the Second World War.

"So far the debate has focused on the policies of Japan's government: whether a government was willing to offer apologies and to support reflection upon Japan's past in history textbooks and so forth," said Prof. Lind. "Firms have been uninvolved in this, basically, though there is a huge legacy of guilt that they could choose to explore if they wanted to."

The apology Mitsubishi issued to American POWs in L.A. was organized by the Simon Wiesenthal Center. Rabbi Abraham Cooper, a human-rights activist who serves as the center's associate dean, told The Globe he will raise the Canadians' case when he meets with the CEO of Mitsubishi Materials on a trip to Japan next week.

"This is an incredible opportunity for Japan," said the rabbi, who is trying to encourage other Japanese companies to follow Mitsubishi's lead in making an apology. "There is a window of opportunity here."

In Canada's case, the window is fast closing: Including Mr. Peterson, there are just 25 Canadian veterans from the Battle of Hong Kong left alive, according to Ms. Hadley. One passed away in mid-June, she said, and of the rest only five are well enough to travel to the association's convention in August.

Mitsubishi hopes to apologize for forced labour during WWII
July 22, 2015 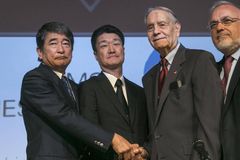 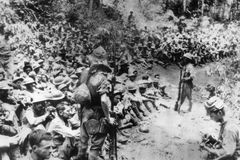 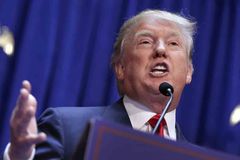