Ever since the Egyptian military pushed aside the Muslim Brotherhood and took power in Egypt last summer, the army has done its best to silence the organization by locking up its leaders, banning its activities and cracking down on demonstrations.

Now largely shut out at home, the Brotherhood has taken its cause abroad, bringing a high-profile legal action at the International Criminal Court (ICC) and launching a global publicity campaign in the hope of winning international recognition as defenders of democracy in Egypt.

The legal battle is led by a team in London that includes one of Britain's top international criminal lawyers, a former official with the United Nations and the former director of public prosecutions in Britain. The lawyers have not only filed a complaint with the ICC alleging widespread crimes against humanity by the military, but they also plan to file a series of lawsuits around the world targeting individual Egyptian army officers.

As to who is footing the bill for the legal work, the lawyers will only say that they have received donations from victims of the military-led government that ousted the Brotherhood's Mohammed Morsi as Egyptian president in July.

The diplomatic effort is being led largely by Abdul Mawgoud Dardery, an Egyptian academic and senior Brotherhood member who was elected to the Egyptian parliament during Mr. Morsi's one-year tenure. The military has dissolved the legislature and arrested Mr. Morsi along with several lawmakers. Mr. Dardery, who now lives in Turkey, spends most of his time travelling to global capitals trying to drum up support for democracy in Egypt and making sure no country backs the military-led government.

It's not clear just how successful any of this will be apart from possibly keeping the situation in Egypt in the public eye.

The ICC claim is a stretch since Egypt is among the few countries in the world that have not ratified the international treaty establishing the court (the United States, China, India and Israel are among the others). The lawyers representing the Brotherhood are pinning their hopes on the ICC recognizing the legitimacy of the Morsi government.

Under the ICC's charter, it can act even in the absence of treaty ratification if a country's government issues a declaration recognizing the court's jurisdiction over an investigation. The lawyers say officials of the deposed Morsi government have made that declaration and that it should be recognized because it remains the legitimate, democratically elected government.

"We hope, and we have good reason to believe, that the court will take this declaration seriously," said John Dugard, a human-rights lawyer from South Africa who is involved with the case and who has also worked with the UN.

Mark Kersten, a researcher at the London School of Economics who studies the ICC, said the claim is unlikely to succeed. The argument that Mr. Morsi is the rightful head of state and can make such a referral "is debatable at best," Mr. Kersten said. "More importantly, I don't think the ICC would want to touch that kind of highly politicized debate with a 10-foot pole."

He added that the court "tries to abstain from making decisions on matters that are fundamentally political and highly controversial – like who the rightful government of Egypt is."

Mr. Dardery's efforts have so far met with mixed results. While few countries have embraced the military-installed regime, not many have been overly critical of it either. Like other Western countries, the U.S. has refused to call the change in power a coup and Canada has indicated some support for the military while calling for a return to elections once violence has subsided.

As for Canada, he added: "Canada is a very important country on the world stage and we would really love to develop people-to-people relations so that the mutual interest between the people of Egypt and the people of Canada can be served."

During the press conference Mr. Dardery went further, suggesting that the future relationship between Islam and the West is at stake in how countries respond to Egypt. "Egyptians and Arabs [should] not feel that they are singled out, that their human rights do not matter, that when they are killed, no one cares for them. Egyptians need to feel that the world is standing with them." 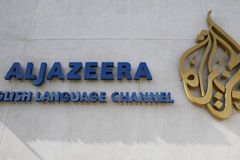