A set of principles for Israeli-Palestinian peace being drafted by U.S. Secretary of State John Kerry is beginning to take shape as indicated by a number of recent leaks.

On Tuesday, a document shared with the Israeli newspaper Maariv showed Mr. Kerry's draft agreement describes Israel as "the state of the Jewish people." On Wednesday, a Jordanian MP revealed to the Palestinian Ma'an News Agency that Mr. Kerry's outline contained "secret terms" that would prohibit Palestinian refugees who hold another country's passport from claiming a right to return to what is now Israel.

Both revelations, if accurate, are consummations devoutly wished by Israel.

Since the current round of peace talks began last July, a tight lid had been kept on negotiations until now. The publicity transformation reflects the change in Mr. Kerry's strategic goals. Faced with failure in his ambitious aim of getting Israelis and Palestinians to agree on a framework for permanent peace within nine months, Mr. Kerry opted to pursue a more modest goal of a set of principles the two sides could accept, albeit with reservations.

He says he wants to have the principles agreed on by next month, before a scheduled release of Palestinian prisoners held in Israel.

With the contours of this new agreement beginning emerge, so too is the opposition to concessions expected from the two sides, the very thing Mr. Kerry hoped to avoid by keeping a cone of silence over the talks.

The very fact that the Jordanian MP, Mohammad al-Qatatsha, described with disdain what Mr. Kerry apparently told Jordan's King Abdullah in a meeting on Monday indicates the King does not like the refugee passport exception one bit. And neither do the Palestinians.

About half of Jordan's population of six million are Palestinian refugees, and Jordan has given citizenship and passports to at least a million of them. But that was a humanitarian gesture, Jordanians and Palestinians say, not one meant to deny refugees a claim to their original homes in Israel.

Conversely, reports that Mr. Kerry's set of principles includes recognition of Israel as a Jewish state – one of Israel's greatest demands – are making Israelis and their supporters very happy. Not so the Palestinians.

"When you talk about a Jewish state, you are talking about the end of any solution for Palestinian refugees," said former Palestinian foreign minister Nabil Shaath. "Do you think any Palestinian can accept this?

"If Mr. Kerry thinks this is the sum of his brilliant intelligence, the document will go nowhere," he told reporters in Ramallah.

What Mr. Kerry now is trying to do is extract from Israel something the Palestinians will like in return for the good things Israel will find among his principles.

The quid pro quo, said Ari Shavit, political columnist for the Haaretz newspaper, is most likely accepting the 1967 borders, with minor territorial swaps, as the basis for the Palestinian state – this is the Palestinians' greatest demand. The borders are the ceasefire line in the West Bank that separated Israeli and Jordanian fighters in 1949 and remained in place until 1967 when Israel overran the territory in the Six Day War.

"It's the old Clinton formula," Mr. Shavit said, referring to a 2009 suggestion made by Hillary Clinton, Mr. Kerry's predecessor as secretary of state: "giving Israel the recognition it wants as a Jewish state, and the Palestinians the borders they want."

The matter of security for Israel will be another Kerry principle, and news of the two sides' views on this already has leaked out.

Israel wants its troops to remain in the Jordan Valley to guard against infiltration of fighters and smuggling of weapons until it decides it is safe to withdraw them. Palestinian leader Mahmoud Abbas says he is willing to let Israeli forces remain for no more than five years, although he would accept a multinational force in the area for the foreseeable future.

Mr. Kerry might well propose an international force that includes U.S., Jordanian and even some Israeli troops. 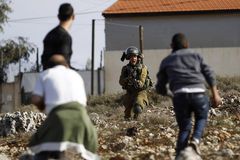