Libyan rebels have started a bloody crackdown on rogue militias within their ranks, as infighting killed at least eight people on Sunday and some commanders predicted more internal clashes in the coming days.

Rebel military officials told The Globe and Mail that they have arrested at least two men in connection with the death of their top field commander, General Abdel Fatah Younis, whose mysterious assassination last week sparked the recent strife within their movement.

Those under investigation include Mustafa Rubaa, a rebel fighter who was entrusted with the responsibility of detaining Gen. Younis and bringing him in front of a panel of judges last week; the second man is Ahmed Bukhattalah, a long-bearded rebel from the coastal city of Darnah, a hotbed of Islamist sentiment.

Neither man has been charged with any crime, and rebel officials emphasized that they are only beginning to unravel a series of plots in Benghazi. Over the last four days, the rebel stronghold has witnessed the high-profile assassination of Mr. Younis, two major jailbreaks, and a seven-hour gun battle between rebel factions on the outskirts of the city.

The chaos has given a strong push to those within the rebel movement who have been trying to consolidate their militias into a more formal structure.

"All those groups will disappear, and they will become one unit," said Brigadier-General Ahmed Qutrani, a senior rebel commander in Benghazi. "None of the commanders can disagree. Anybody who dares will be crushed."

At the beginning of the war, rebel groups were either loosely organized youth volunteers, or uniformed ex-military units that had turned against the regime. During months of battle, the youth groups coalesced into bigger units, sometimes called battalions or brigades. They gave themselves colourful names: the Abu Salim Brigade was named after the notorious jail in Tripoli, the Omar Mukhtar Brigade took the name of a national hero who fought colonialism.

On paper, the various militias fell under the umbrella of the Union of Revolutionary Forces, which answered to the rebels' minister for defence. But the loose supervision of the militias came under harsh scrutiny in the days after Gen. Younis's assassination; one of the suspects, Mr. Bukhattalah, is described by rebel officials as belonging to the Obeida Ibn al-Jarrah Brigade, alleged to have ties with radical Islamism.

Another militia, the so-called Nida Libya Brigade, apparently spent months recruiting, training and fortifying an old licence-plate factory in an industrial zone as its headquarters. When other rebels stormed the headquarters in the early hours on Sunday, they claimed to find an enclave of pro-regime sentiment: green flags, portraits of Colonel Moammar Gadhafi, target lists of rebel leaders to be killed, and large amounts of explosives.

The fight to take over the Nida headquarters killed eight and injured 20, and among those who surrendered were a handful of prisoners who had escaped during a pair of jailbreaks in Benghazi on Thursday evening. Rebels now suspect that the Nida militia took advantage of the disarray after Gen. Younis's assassination to break out dozens, or perhaps hundreds, of captives from their jails.

It's not clear why the Nida militia would turn against the revolution; rebel officials said its members had previously joined the fight against Col. Gadhafi's forces.

It appears that Col. Gadhafi's troops also used the rebels' moment of weakness to strike into their territory on Saturday, with a foray to the Jalu oasis, about 250 kilometres south of the sea, near the strategically important oil fields of Misla and Sarir. Rebels had been planning to restart oil production from those fields by Monday, giving them a vital supply of revenue, but the rebels did not say whether the attack would set back that schedule.

When asked why dangerous militias such as the Nida group could have been allowed to muster their forces in the rebel stronghold of Benghazi, Mustafa El-Sagezly, the rebels' deputy minister of the interior, blamed the tribal structure of Libyan society. He said the Nida militia claimed to represent a powerful tribe, although he declined to name the specific tribe involved.

"Since the issue of the tribes is sensitive, we did not want to stop them," he said.

Even when other rebels surrounded the Nida headquarters in the middle of the night, they hesitated before attacking. They called on elders of Werfalla, the biggest tribe in Libya, who spent three hours negotiating with their fellow tribesmen inside the building. Only when those talks broke down, witnesses say, did the killing start.

In an effort to quell any hard feelings after the raid, a delegation of Werfalla tribal elders held a news conference wearing traditional robes.

"We know some Werfalla were involved," said Sheikh Nasr Gemali, leader of the tribe for eastern Libya. "But we want stability. Our hands will not be stained with the blood of the martyrs." 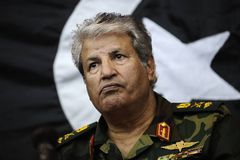 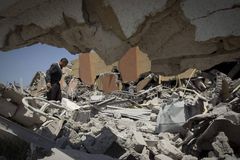 A powerless Gadhafi could stay in Libya, some NATO countries concede
July 26, 2011 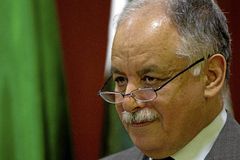 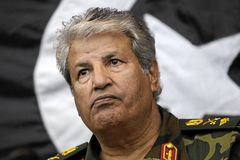