Suad Ghouti was afraid to tell her neighbours.

Her sixth child, nine-month-old Abdel-Rahman, had a serious heart defect, and the family's specialist in Gaza told her the only place the boy could receive the surgery he needed was in Israel.

In the religiously conservative and militant city of Rafah, Israel is regarded as the enemy. It's where many of Hamas's senior leaders were born and raised, and where even more extreme Salafi-Jihadists now challenge the Hamas leadership. For many there, putting your son's life in the hands of "the Jews" was highly risky and politically inappropriate.

Even the Ghoutis, while insisting they are politically independent, have a Hamas flag hanging in their sitting room, and a sticker of late Hamas leader Sheik Ahmed Yassin,is stuck to the door of one of their children's bedrooms. But their doctor had assured them that an Israeli non-governmental organization called Save a Child's Heart would take good care of them.

SACH is a remarkable humanitarian organization that has performed heart surgeries on more than 2,600 children from around the region, and from some 37 countries or territories altogether - all at no cost to the patients or their families. Of the total number treated, 48 per cent of the children are Palestinian.

Last month, the 15 year-old organization was recommended for special consultative status by the United Nations Economic and Social Council, a major acknowledgment of the group's hard-earned credibility. The status enables them to participate in various UN bodies and, more important to SACH, gives the group international stature - it's no longer just a Jewish charity.

In the Palestinian territories and in neighbouring Arab countries, SACH operates on the ground through a Christian partner organization, Shevet Achim, that can work in places Israelis aren't permitted and can help overcome the fear and distrust that many patient families might have.

That is how Mrs. Ghouti and her son find themselves in Edith Wolfson Medical Centre in this working-class community south of Tel Aviv, preparing for the baby's surgery.

Brought to the Erez checkpoint inside Gaza, the Ghoutis meet up with several other Palestinian children and parents also heading to Wolfson.

Their paperwork all in order, the Ghoutis and other families pass through the crossing surprisingly smoothly - first through Hamas's out-going checkpoint and then through the labyrinthine Israeli controls, where every package is meticulously searched, and Mrs. Ghouti and her baby go through a full body scan.

On the way to Holon, the Ghoutis pass by Sderot, the Israeli town targeted by of hundreds of rockets fired from Gaza - and where Mrs. Ghouti's grandparents and in-laws had lived before fleeing to Gaza during the fighting of 1948.

Outside the third-floor office of Akiva Tamir, head of pediatric cardiology, sit several Palestinian families. Some will have their children evaluated and be sent home to await surgery. Others, such as Abdel-Rahman, will have their operations scheduled more quickly and stay until then. Many of those waiting say it's their first time inside Israel. They seem comfortable inside the hospital, but say they worry about being outside in the street.

Fatma Sarsour, a part-time staff member from an Arab community inside Israel, interprets for the families. She helps deliver the bad news to one family of what their child's evaluative tests have shown.

Abdel-Rahman suffers from a ventricular septal defect, a hole in the wall between the right and left ventricles of the heart. It's the most common congenital heart defect treated here.

The first symptoms of a problem were Abdel-Rahman's shortness of breath, but doctors early on also could hear a murmur, caused by the turbulence in the flow of blood.

In Abdel-Rahman's case, you can feel the vibrations if you put a hand on his tiny chest.

Untreated, he would suffer from heart failure and lack of growth.

Wheeled into the operating room, leaving a tearful mother behind, the boy is dwarfed by the mountain of surgical equipment and people around him.

Abdel-Rahman's small body is prepared. His chest is smeared in what appears to be iodine and a plastic wrap applied.

The incision down the middle of the chest is quickly drawn and a battery-powered saw zips through his tiny sternum in no time. His rib cage is spread apart by a device small enough to be from a child's toy carpentry set.

The tubes connecting Abdel-Rahman's heart to his lungs are severed and he is hooked up to a giant heart-lung machine. The surgeons set to work on closing that hole between his ventricles.

About four hours after she last saw him, Suad Ghouti is reunited with her son in the recovery room.

Others, however, brought by SACH from much further away, must remain in Israel for several weeks at least, sometimes for as long as a year.

In these cases, the children and their mothers are boarded at the Children's Home, a charming melange of cultures.

On this day, 11 children with 10 moms are in residence, along with a nine others, including staff, doctors in training, a nurse and two volunteers. Four of the children are from Zanzibar. Three moms in colourful African wraps watch as the kids play on the backyard jungle gym. The mother of one of the children was unable to leave her other children at home alone, so the other three pitch in to take care of the child.

While SACH's staff and volunteers are almost entirely Jewish, about 90 per cent of the children treated are Muslim.

In the beginning, there was tremendous difficulty bringing children to Israel. There were no operatives on the ground, no networks in place and no medical people doing the necessary evaluations. Dr. Tamir recalled having to go to Tanzania to evaluate 100 cases of children ferried to the mainland from Zanzibar at a borrowed facility in Dar Es Salaam. Some 35 were put on flights to Israel, and returned healthy.

"It got a lot easier after that," Dr. Tamir said.

Children in war-torn Iraq posed another problem. That's where Shevet Achim came in. The name means "brothers together" in Hebrew, and the Christian group specializes in dealing with neighbouring Arab countries. The group is dedicated to Jerusalem and takes its inspiration from the 133rd Psalm that speaks of a song of ascents. Behold, how good and how pleasant/For brothers to dwell together in unity.

With no passports, Shevet Achim's field workers organized laissez passers for children and a parent to travel across Jordan and over the Allenby Bridge, then through the West Bank to Israel.

The Christian charity raises money to help pay for those it brings in, often via sponsor-a-child programs. It costs $8,000, the group says, to cover the travel, surgery, room and board for each patient plus parent.

Those costs would be enormously higher if the doctors and other medical staff didn't largely volunteer their time and expertise.

The money to fund SACH comes from several Jewish and other charities as well as from a well-oiled international operation that raises money and channels volunteers to SACH in Israel. As well, Emma Hacohen, a former volunteer, is now on SACH's staff, organizing a massive climb this August of Mt. Kilimanjaro in Tanzania to raise $1-million from sponsors.

Many of SACH's patients come from Tanzania. And it was on Kilimanjaro that SACH's founder Amiram Cohen died in an accident in 2001.

Dr. Cohen got the idea of helping heart-troubled children in developing nations while working for the U.S. Armed Forces in Korea in the late 1980s. The Americans ran a program providing medical care for orphaned and indigent children, and Dr. Cohen was asked in to perform cardiac surgeries.

But in this tense part of the world, does Dr. Tamir wonder if the young patient from Gaza will grow up fighting Israel? "No," he said. "We don't think of it that way. These are children who need our help."

"We like to think we are planting the seeds of a better future between Israelis and Palestinians," said SACH's executive director, Simon Fisher.

Back in Rafah, Suad Ghouti is comfortable now telling her neighbours about Abdel-Rahman's successful surgery in Israel. Everyone, it seems, is happy for them. Her 21-year-old brother drops by to see the baby. "I still think of Israelis as occupiers," he says, "but I like what they did for my sister."

The Israeli border police officer who checked the credentials of Palestinian families on their way to Israel has the last word.

The mother of seven-year-old twins, she said she couldn't imagine putting the life of one of her children in the hands of a doctor on the other side. "I absolutely could not do that," she said. 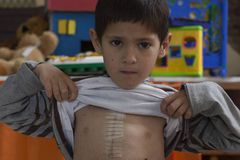