When the winner of the Nobel Peace Prize is announced Friday, Liu Xiaobo could well be among the last people on the planet to find out whether or not he has become the first Chinese national to win. That's because the 54-year-old democracy advocate will spend most of the day in a prison cell he shares with five others in the obscure city of Jinzhou, 500 kilometres from Beijing.

Mr. Liu winning the Peace Prize from jail is a nightmare scenario for China's ruling Communist Party, which has done its best to isolate the former university professor and his ideas, jailing for "inciting subversion of state power" in a sentence handed down last Dec. 25. It would also be a rare boost for China's weak and divided democracy movement, which has been in retreat ever since the Tiananmen Square crackdown in 1989.

But despite a remarkable warning from Beijing that a Nobel Prize for Mr. Liu could damage China-Norway ties, Mr. Liu was the prohibitive favourite to win the award as the hours ticked down before the official announcement. A Dublin-based online betting house has already declared Mr. Liu the winner, and started paying out prizes, after a surge in betting on Mr. Liu led the operators to conclude that "the Nobel cat is well and truly out of the bag."

If that turns out to be the case, it would be a remarkable breach of form for the Nobel Committee, which is usually known for its extreme secrecy. Indeed, even as gamblers who bet on Mr. Liu were raking in their winnings, Nobel experts were pointing out that other frontrunners such as Sima Samar, an Afghan women's rights activist, Zimbabwean Prime Minister Morgan Tsvangirai, or Memorial, a Russian human rights organization, would just as worthy of the award as Mr. Liu. Hu Jia, another prominent Chinese dissident, is also among the rumoured nominees.

A Nobel Peace Prize for Mr. Liu would be seen primarily as recognition of his involvement in Charter 08, a manifesto he penned that calls for greater freedom of speech, human rights and democracy in China. More than 10,000 others have since signed the document, despite the fact it is difficult to find on the heavily censored Chinese Internet.

The document was modeled on Charter 77, which became a rallying point for those opposed to the communist regime in the former Czechoslovakia. Vaclav Havel, the man who drafted that charter, and who later became the country's first democratically elected president, has been among those lobbying hardest for Mr. Liu to win the Nobel.

Mr. Liu was arrested the day of Charter 08's online publication in December 2008, and has been in custody ever since. He was previously sent to a labour camp for his role in the Tiananmen uprising, when he joined some of his students in a hunger strike on the square. Less well known is the role Mr. Liu played in convincing thousands of students to peacefully evacuate Tiananmen on the night of June 3, 1989 once it became clear that a bloody military crackdown was underway, perhaps saving many lives.

"If Liu Xiaobo can win this award, it will play a significant role in pushing forward China's political transformation. It will also truly encourage civil rights defenders in China. And it may even help get Mr. Liu Xiaobo his freedom earlier," human rights lawyer Teng Biao, a Charter 08 signee, said in an interview.

But Mr. Teng expected there would also be a backlash against other dissidents in China if Mr. Liu does win, and an attempt to keep most Chinese from ever hearing that the prize had finally been awarded to one of their fellow citizens. (The Dalai Lama, the exiled Tibetan spiritual leader won the Nobel Peace Prize in 1989.)

The government has made plain that it does not consider Mr. Liu - denounced this summer in one Communist Party affiliated newspaper as an "anti-China radical" - a suitable recipient. In June, Beijing dispatched a deputy foreign minister to Oslo to warn Nobel Institute director Geir Lundestad that giving the Peace Prize to Mr. Liu would "be seen as an unfriendly act" that would damage relations between China and Norway, Mr. Lundestad said.

Count Mr. Liu's wife, Liu Xia, as among those who won't believe her husband has won the prize until she hears it from someone in Oslo. "I don't think he is going to win," she said, noting that only twice before had the Nobel Peace Prize gone to someone who was in prison at the time. (German-Jewish writer Carl von Ossietzky, who was in a concentration camp when he won the prize in 1935, and Burmese democracy leader Aung San Suu Kyi, who was under house arrest in 1991. Soviet dissident Andrei Sakharov was prevented from leaving the country to collect the 1975 award.)

Ms. Liu said her husband had been told by his lawyer during a recent visit that he had been nominated for the Nobel Peace Prize, but he would be shocked if he won, she said.

"I think he would definitely find it hard to believe. He never thought of being nominated, he never mentioned any awards. For so many years, he has been calling for people to back the Tiananmen Mothers (a support group formed by parents of students killed in the 1989 demonstrations). He never thought about what he would get." 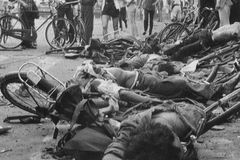