They stood seven across on the stage, the men and women who want to lead Britain, their very number a reminder of how much this country has changed in just the past five years.

The main characters in this wacky performance were supposed to be the incumbent Prime Minister, Conservative Leader David Cameron, who stood somewhat aloof on the far right of the stage, and his challenger, Labour Leader Ed Miliband, placed dead centre, staring into the camera like it was a first date. The other key antagonists were expected to be Liberal Democrat Leader Nick Clegg, Mr. Cameron's deputy prime minister in a coalition government since 2010, and Nigel Farage of the upstart UK Independence Party, the proud maverick crashing the posh dinner party.

They were lobbed questions about the deficit, the National Health Service, immigration and Britain's future, and the four men predictably ended up spending much of the two-hour debate trying to talk over each other. The mood was captured early on by Mr. Farage raising his hands and yelling, "I don't know what's going on here!" during a shouting match about the deficit.

The seven-way debate format was always going to favour the challengers, since they were being given a spot on a stage that five years ago was reserved for the Conservative, Labour and Liberal Democrat leaders. It also favoured the three female leaders – all heads of smaller parties – who in the view of snap polls did a far better job of winning over viewers, perhaps because they shouted less and spent more time actually trying to answer questions from the audience.

The Daily Telegraph, tracking viewer responses on Twitter, found the three women – Nicola Sturgeon of the Scottish National Party, Leanne Wood of the Welsh nationalist Plaid Cymru party and Natalie Bennett of the Green Party – all generated better than 60-per-cent positive remarks (Ms. Sturgeon led the way with 83 per cent), while no male leader gained a rating above 50 per cent.

"This debate shows why we need to break the old boys' network at Westminster," Ms. Sturgeon said at one point toward the end of the two-hour bun fight.

She's likely to be the one who does that if the trends hold in this remarkable campaign. The SNP is on course to emerge as kingmaker after the May 7 election, with polls showing the Conservatives and Labour in an effective dead heat across England and Wales and the SNP poised to sweep a large majority of the seats in Scotland.

If the polls prove accurate, the Conservatives and Labour will both be left about 50 seats short of the 326 required to form a majority in the 650-seat House of Commons. The SNP, meanwhile, looks set to emerge as the third-largest party by winning 40 or more of the 59 seats up for grabs in Scotland.

Ms. Sturgeon pulled off a remarkable feat Thursday when she was widely acclaimed as the debate's winner – winning over many viewers who can't vote for her party – by coolly taking shots at the record of Mr. Cameron and Mr. Clegg, chipping away at Mr. Miliband's credibility and deflating Mr. Farage's bombast.

Five years ago, it was Mr. Clegg who was seen as the clear winner of the debate, with Mr. Cameron and Labour Leader Gordon Brown gifting his campaign with a new slogan by repeating, "I agree with Nick." Thursday night on Twitter, one of the hottest hashtags in Britain was #iagreewithnicola.

A snap poll by YouGov found that 28 per cent of viewers felt Ms. Sturgeon had won the seven-way argument, well ahead of second-place Mr. Farage, who won the support of 20 per cent of viewers despite an awkward moment when he ranted about foreigners with HIV draining the resources of British hospitals.

The debate, however, did little to settle the question of who will be prime minister after May 7. If Mr. Miliband came into the debate looking to land a knockout blow on Mr. Cameron, that didn't happen. Mr. Miliband attacked Mr. Cameron over the costs of five years of austere fiscal policies and the Conservatives' plans to introduce further cuts to social programs, but the Labour Leader also spent much of the debate defending his left flank against attacks from the SNP and Plaid Cymru.

Mr. Cameron, meanwhile, stuck to an apparent strategy of trying to float above the six aspirants to his job, minimizing direct clashes with Mr. Miliband and Mr. Farage and generally saying as little as possible. YouGov's poll suggested Mr. Cameron had the third-best debate performance, with 18 per cent saying he had won the night, while Mr. Miliband came fourth with 15 per cent.

The seven-way format – the only debate Mr. Cameron's team would agree to – was always unlikely to produce a clear winner, and the Conservatives have rejected Labour demands for a one-on-one debate between Mr. Cameron and Mr. Miliband. Thursday's muddled result may be exactly what the Conservatives had been hoping for. 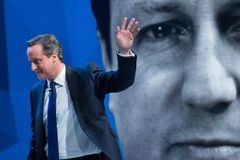